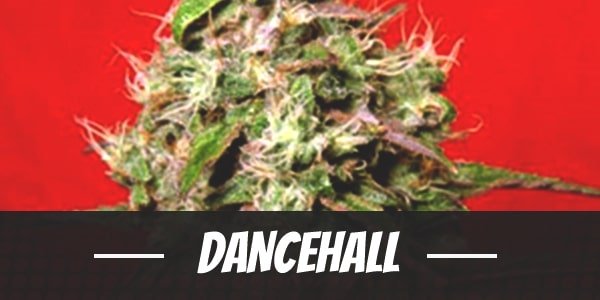 Life is a celebration in the beautiful island nation of Jamaica. Music and dancing is every bit a part of the culture. From its root in reggae, an upbeat musical style called dancehall evolved to become distinctly Jamaican.

As people live life swaying to the beat of dancehall along the famous stretches of beaches in the country, users of the strain named after the music genre take a trip to the highest of high to celebrate all the great things that life has to offer.

Interestingly, it is an outfit called Reggae Seeds that bred Dancehall. A mostly Sativa strain, much of its effects are centered on an uplifting high. No doubt this is the influence of one of its parent strains Juanita la Lagrimosa. This in-house hybrid, known to deliver a clear-headed high, was paired with another, an Indica-dominant male Kalijah.

With Dancehall, users do not have to fly out to Jamaica to have an upbeat experience. Even as it takes users soaring to a happy high, it gradually introduces a soothing physical sensation that in no way hinders movement.

Although relatively a new strain, it has already gained the reputation of being a high-caliber weed as evidenced by its winning the indoor bio category of the Spannabis Cup back in 2010.

From all indications, Dancehall has a 1:1 THC to CBD ratio. It does not come with an insane potency, but its effects are quite pronounced. Despite coming with slightly under 10% THC (unconfirmed), users new to this strain are likely to get caught off guard with its fast-acting effects.

At the onset, it induces a clear-headed high that unlocks the creative side. Even as ideas and thoughts pop into the mind, an uplifting sensation spreads. Feeling uplifted and upbeat, it is also not uncommon for people to feel aroused.

For the next hours, Dancehall not only delivers an invigorating feeling but also a sense of well-being. Often, users can feel an occasional tingling sensation flowing through the body. As the physical high takes effect, it induces a soothing body relaxation that blends in with the mental high smoothly.

Dancehall is a great party strain, one that is used with a group of friends. The upbeat effects it delivers makes for a colorful social gathering and lively time.

Dancehall does not come with a pungent odor. In fact, some people may even find its sweet floral scent underwhelming. But that impression changes as soon as its flowers get crushed. Only then does it emit the much more pronounced woody fragrance with a spicy note.

When it comes to its taste, Dancehall has a fruity quality that comes with its sweet pineapple flavor. It is also possible that some users may detect a very mild fuel undertone that is an influence of its genetic lineage.

Being an award-winning strain doesn’t mean that users no longer have to deal with its adverse effects. Typical of using any marijuana strain, Dancehall can cause dry mouth and eyes. At times, it may even cause a slight headache.

One thing that users do need to be aware of is that it can also cause a certain degree of anxiousness. Some people may even feel a little bit paranoid.

Although these conditions are often mild and do not last longer than a few hours, it is still something that people who are predisposed to anxiety issues or panic attacks should know about and think twice before choosing this strain.

As mentioned, Dancehall has a 1:1 THC to CBD ratio. In some tests, though, it was shown that its CBD could be as high as 15.85%. Because of that, it brings incredible pharmacological benefits to medical users.

Of note is its ability to act as a pain reliever. For many people who have had to endure chronic pains and aches, a couple of tokes is all it takes to find relief.

As an upbeat strain that enhances the mood, it is also quite capable of wiping out stress. As such, people who are suffering from depression may also benefit from the mood swing.

Another thing Dancehall is noted for is in its ability to boost the spirit making people feel upbeat. In some ways, it has proven to be an effective counter to the symptoms of fatigue.

Dancehall thrives whether one plants it indoors or outdoors. It does prefer an environment where the humidity tilts to the low side such as that found in a dry climate. Of course, that means growers will have to make sure it is receiving adequate water. One thing to watch out for is that the plant is prone to botrytis (gray fungus). Usually, this is a problem that occurs if the humidity level is too high.

When grown inside the house, growers who use the Screen of Green training method will want to trigger the flowering period earlier than usual. Reggae Seeds recommend allowing three weeks for the vegetative period before transitioning to bloom phase.

To influence purple hues, place the plant at 20 degrees Celsius environment before it begins flowering.

Compared to traditional Sativa plants, Dance Hall has a shorter flowering period that falls between 8 to 10 weeks. Not a lot of details were given on its yield, but it is safe to assume that it should be around 10 to 12 ounces per square meter.

Left with room to grow, the plant can reach 5 to 8 feet tall. In a dry climate and under the care of experienced growers, it should start flowering during the first or second week of October with each plant having a yield of 12 ounces or more.

Have you ever smoked or grown your own Dancehall? Please let me know what you think about this marijuana strain in the comments below.