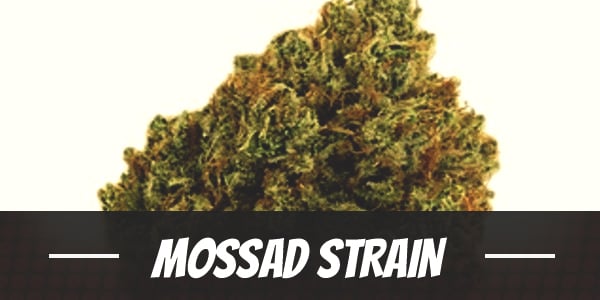 Mossad is an Indica-dominant strain that pairs a profound cerebral onset and a tranquilizing body high. It is powerfully potent too, with THC levels ranging from 16% to 19%, but versatile enough for both beginners and veterans to enjoy. Hence, its gradual transition into an industry staple over time.

Its unique quality, however, lies in its great wake-and-bake quality. Its head high has the ability to sharpen the senses and completely turn one’s attention toward a task for hours before slowly descending into mellow relaxation. Interestingly, it shares the same name as Israel’s chief intelligence and secret service agency.

In developing the strain, Terraform Genetics used Conspiracy Kush as a base which influenced its offspring’s cerebral stimulation and soothing comedown. It was later paired with the famous Kosher Kush to introduce an earthy profile and boost potency.

Mossad has a largely cerebral onset that is reminiscent of Sativa-leaning strains. It starts as a rush of euphoria that swarms the mind until it is devoid of distractions. However, instead of an on-the-spot head slam, it is a gradual buzz that sharpens the senses only after 15 minutes have passed since the first puff. For this reason, it is important to pace consumption of the buds.

Apart from uplifting low spirits and boosting moods, the mental clarity also brings out an upbeat disposition toward word. It transforms one’s negative or dreary outlook of the office. The heightened sensitivity, as well as keen focus, provides a fresher perspective on events or documents. Additionally, it also helps piece ideas together.

In time, the creeping Indica effects manifests as a light pressure making its way down. It soothes the muscles and reduces tensions through its calming tranquility. In all likelihood, users will feel heavy as the heaviness it plants on the limbs intensifies. However, keeping it from locking the body to the couch is the heady effects from the initial onset. Eventually, however, one will be fast asleep once the high wanes.

As alluded to earlier, Mossad is a slow-starter that is meant to be enjoyed at a proper pace. Consuming its buds too fast then moving around can be dizzying and anxiety-inducing to users, especially patients prone to anxiety.

Mossad has a sweet base accentuated by herbal notes of rose and sage. Similar to its scent, it has the zesty undertone of citric fruits and lemon. On the exhale, it leaves a delicious woody pine aftertaste that lingers in the mouth for quite a few hours.

Apart from the usual cottonmouth and dry eyes, Mossad can possibly green users out. The keen awareness toward one’s surroundings can trigger anxiety which develops into a subtle feeling of paranoia. Although the side effects are mostly confined to a headache, it is still best to down a few glasses of water throughout the day.

Mossad’s initial head high brings out an innate sense of happiness as it boosts mood. Hence, it is a great source of comfort to patients dealing with mental health issues like depression, anxiety, and PTSD. It relieves the overwhelming dread that comes with fast-paced thoughts while clearing the mind of hopelessness. The mental clarity also sharpens the senses while narrowing thoughts on tasks.

Through a similar mechanism, it is able to relieve stress along with symptoms such as mental or physical exhaustion. After all, the same psychoactive compound that induces the upbeat disposition also has natural painkilling properties. It soothes the muscles of aches and pains beginning from the temples. At the same time, it also prevents the stomach from suddenly contracting. In this way, users can also rely on Mossad for nausea.

The temporary tranquility, though temporary, is powerful. It lulls users to slumber with its deeply soothing effects. It also aids in enhancing the quality and quantity of sleep.

Mossad has a thick stalk with equally hardy branches. Its sturdy structure does not topple down against strong wind. And, at the same time, it can withstand a variety of unpredictable conditions such as changes in weather.

In spite of its great performance outdoors, investing in a temporary enclosing is still highly recommended especially when cultivating the strain in the colder weather of the north. It keeps the plant safe against frost, which can automatically kill it overnight, and provides additional warmth.

A bushy plant, Mossad will have to be pruned often. Its broad leaves sometimes inhibit the circulation of light and air in the lower nodes indoors where space is usually limited. By removing certain parts, aspiring breeders also provide adequate nutrition to healthy budding sites.

There are two phenotypes to expect when growing Mossad. First leans heavily toward its OG heritage, with its fruity or herbal profile and singular calyx shape. Meanwhile, the second is highly reminiscent of its earthier parent. Both, however, have a naturally short stature that pairs well with the Sea of Green method.

TIP: Looking to buy seeds like Mossad? Check out my seed shop

Mossad matures quickly, peaking anywhere between 7 to 9 weeks after the initiating the flowering period. A vigorous producer, growers can expect each square meter to yield at least 10 to 12 ounces of buds per square meter.

In the northern hemisphere, Mossad blossoms anywhere from the last week of September to the middle of October with each plant producing at least 12 ounces of dried buds.

Have you ever smoked or grown your own Mossad? Please let me know what you think about this marijuana strain in the comments below.