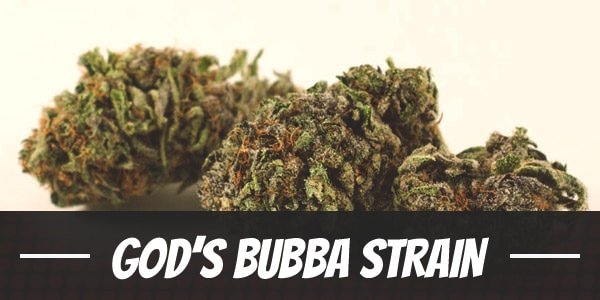 God Bud is a strain engineered to near perfection. It has a relatively quick onset with a long-lasting high that allows connoisseurs to revel in its effects for hours on end. Not to mention, it has a branchy structure that produces multiple budding sites.

Still, the strain can be made better. And, it was to this end that Jordan of the Islands decided to pair it with another legend. Pre-98 Bubba Kush is a long-time favorite among cannabis enthusiasts. Its coffee-flavored smoke delivers a stress-crushing high without incapacitating its users thus negating God Bud’s hallucinogenic buzz.

God’s Bubba is an amalgamation of its parents. Its onset is faster compared to most Indica-leaning strains and boasts a cerebral element that naturally uplifts the mind. Meanwhile, its comedown is heavily tranquilizing that, after three or four hours, users eventually become too drowsy. The strain also has great therapeutic potential because of its head-to-toe high.

God’s Bubba does not have a head-slamming high. Instead, it is a slow starter with effects that usually begin 15 minutes after the first two to three puffs. For this reason, it is important to pace consumption of the buds. Otherwise, it can be quite overwhelming.

With that said, its onset is a calming buzz of euphoria that clears the mind and brings back an innate sense of happiness. Although subtle, the upbeat mood is a godsend to many users. It not only gets rid of worries that plague the mind but also prepares one for the soothing effects to come.

A tingling sensation begins to form in the temples. Subtle at first, it later on intensifies after an hour or two have passed. And, as it trickles down to the rest of the body, it blankets users in deep relaxation while removing tension in its wake. In all likelihood, one will want to lounge around the couch idly.

Overall, God’s Bubba is best used as a nighttime treat. Its heavy-hitting high leaves users feeling drowsy. And, as the effects persist, it leaves

God’s Bubba is a pungent strain. In fact, opening a bag alone is enough to fill the room with the aromatic scent of wet soil and unearthed wood. Broken apart, the fragrance of pine intensifies. However, it is later overpowered by a sour diesel when the buds are combusted.

Just like how it smells, God’s Bubba has an earthy flavor that entices the palate. As its smooth smoke is drawn in, its undertones of woody pine begin to fill the mouth. On the exhale, it leaves a sour aftertaste reminiscent of its diesel influence.

God’s Bubba, like other strains, has cannabinoids interfering with the body’s natural ability to produce moisture. As a result, users experience dry or red eyes along with a cottonmouth. At times, it may even be accompanied by a temporary dizziness in the temples. The effects are usually unavoidable and last for hours but users may down a few glasses of water to stay hydrated throughout the day.

God’s Bubba is a source of relief for many patients in spite of its widely-known recreational effects. Its significant therapeutic value lies in it cannabinoids, particularly its THC and CBD, which manage symptoms of a myriad of afflictions.

Its happy high, for example, effectively reduces stress by clearing the overwhelming dread that comes with work or school. The upbeat disposition also shines a ray of hope to patients dealing with mental health issues like depression, PTSD, and anxiety.

Its best use, however, as an Indica-leaning strain, is relieving physical aches throughout the body. Beginning from the temples, it delivers a soothing buzz that appeases headaches and relaxes the muscles to it from painfully contracting or cramping. In doing so, it also temporarily removes intraocular pressure which can lead to glaucoma if left unattended.

A Jordan of the Islands product, God’s Bubba is famous for its ease of growth. It has the short stature of Indicas and the vigorous bud production of Sativas. For this reason, it is a popular choice among growing enthusiasts and first-time growers.

The plant thrives best in gardens and farms where it can soak up the sunlight easily. It will need a temporary enclosing for the early winters and late falls though as the weather can be too harsh.

In a controlled growing area, the Indica-dominant plant does not need to be topped early. However, it may require a powerful ventilation system. Its compact structure and large broad fan leaves can inhibit the circulation of air among the lower nodes. Without proper aeration, any moisture stuck between its crevices can turn into mold or mildew. Pruning will also help. Apart from improving light and airflow, removing certain parts like dying branches or leaves will distribute nutrients to healthier areas.

Growers can significantly increase yields through the Sea of Green method which requires placing at least four plants in a single square meter. This is especially true when a hydroponics setup is installed. Bending, as well as a High-Stress training technique like Super cropping, will enhance trichome production.

God’s Bubba has a short flowering period that lasts between 7 to 9 weeks. Once ready for harvest, it yields at least 10 ounces of buds per square meter..

In the northern hemisphere, God’s Bubba flowers from the last week of September to the middle of October. It normally yields at least 12 ounces of buds per plant. However, it can produce much more in the hands of a seasoned grower.

Have you ever smoked or grown your own Alaska Thunder Grape? Please let me know what you think about this marijuana strain in the comments below.