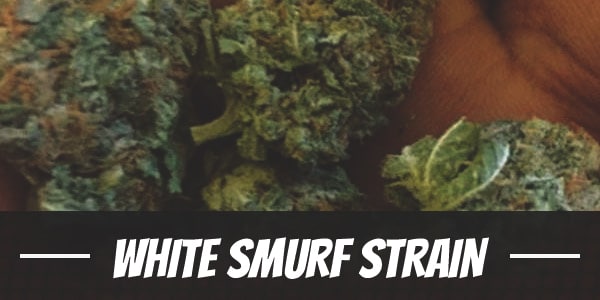 White Smurf is a legendary strain that has garnered fame because of its impressive growth profile, heavy trichome production, and high yields. Adding further appeal is its menthol flavored smoke which delivers a potent cerebral-focused high with a cooling and invigorating effect on the rest of the body.

Its award-winning buzz and grow performance can be attributed to the marriage of three legends. From Northern Lights, it gained its deep hues and fast flowering. Further improving its maturation period and trichome production is Skunk No.1. Finally, a Dutch Sativa was added to the cross to reinforce its functional head high.

When searching for the buds or its seeds, it is best to ask for White Panther. The strain was renamed after the White Panther party’s co-founder John Sinclair, a dear friend of Ceres Seeds.

White Smurf has a quick-acting high that begins almost immediately after the first few puffs. Its onset first manifests around the temples and behind the eyes as an uplifting buzz. Eventually, as it intensifies, it begins to swarm the mind to fill it with cheery thoughts which successfully turns the mood upbeat. The behavioral change is immediate too, as smiles spread from ear to ear and a bout of giggles escape the mouth.

The happy high is also a godsend for many casual users. It turns another dreary day at work into a transformative experience that brings back motivation. It sharpens the senses too and, as a result, enthusiasts feel more in focus with work. Meanwhile, the boost in confidence also leaves one feeling more open to discussion.

After about an hour or two, the light pressure oozes down to the rest of the body in waves. It soothes each muscle until users are fully enveloped in total relaxation until the joints are free of tension. Feeling like a well-oiled machine, users are free to pursue tasks without the heaviness.

However, one must remember to use the strain within limits. Its overwhelming effects can turn the buzzing ball of energy into the carcass of a blown fuse, similar to that of a white dwarf. Users can be left in a daze as the heightened awareness becomes too intense.

White Smurf has a cool fragrance that invigorates the senses. It smells strongly of mint with a little bit of menthol. The citric scent of freshly picked lemons later complements the overtones once the buds are either broken apart or combusted.

Drawn in, White Smurf entices the palate with its cool smoke. It washes over the mouth with the surprising taste of mint. Accentuating it are notes of zesty citrus and tangy lemon. On the exhale, however, it leaves an aftertaste of menthol.

A cottonmouth and dry eyes are two of the most common and inevitable reactions to smoking White Smurf. This is mostly due to its cannabinoids interfering with the body’s natural ability to produce and retain moisture. Although both are mild, users can still manage the symptoms by downing a few glasses of water throughout the day.

Greening out, which is a mixture of dizziness, anxiety, or paranoia, is another possibility too. Often, it is the result of consuming beyond tolerance levels. However, one’s disposition before the high also plays a role. In such cases, it is best to pace consumption of the bud or avoid it at all.

It is easy to assume that White Smurf, with its THC levels of up to 20%, is a recreational strain. After all, it does deliver a head-to-toe buzz that can easily rival the most potent of highs. However, it is also the psychoactive compound that contains painkilling properties. And, at that level, it can easily relieve a variety of aches and pains throughout the body.

Replacing the heaviness in one’s limbs is an energizing buzz that reinvigorates the body. For this reason, it is a great source of comfort to patients dealing with the exhaustion brought about by fatigue or disease. Meanwhile, its anti-inflammatory qualities reduce swelling and redness to prevent the muscles from suddenly contracting.

The same restorative effects also apply to other manifestations of stress. Its rush of euphoria soothes the mind of self-depreciating thoughts that usually accumulate into anxiety. At the same time, it uplifts the mood to help users with mental health issues like depression or PTSD manage existing symptoms although only for a temporary time.

Although it is a well-balanced hybrid, White Smurf grows more like an Indica. It has broad fan leaves with a deep green hue and is relatively short in stature.  Not to mention, it is quite sturdy as well. For this reason, it is a wonderful introductory strain for enthusiasts learning how to grow for the first time.

Its hardiness allows it to withstand a variety of unpredictable factors such as light winds and sudden changes in weather especially when cultivating it in a garden or a farm. In the northern hemisphere, it may even

Still, there are many who chose to grow the plant in a controllable environment where lighting, temperature, and humidity. Indoors, growers can also utilize the Sea of Green method to take advantage of its short stature. By placing at least four plants closer together, it can hasten the flowering period and encourage more budding sites.

It will need to be pruned often. Its branchy structure creates multiple broad fan leaves that can sometimes inhibit the circulation of light and air around the lower nodes. Not to mention, removing certain parts also further improves nutrient distribution.

At maturity, the plant is dusted in a heavy coat of resin that make it seem almost white. Its sticky buds, as well as impressive amount of trichomes, is highly appealing to concentrate enthusiasts.

Indoors, White Smurf matures quickly. After flowering between 6 to 8 weeks, it is set to produce at least 16 ounces of buds per square meter.

In the northern hemisphere, White Smurf’s flowers usually begin to mature from the middle of September up to the early days of October. Although, depending on the weather, it can sometimes extend by a week or two.

Have you ever smoked or grown your own White Smurf? Please let me know what you think about this marijuana strain in the comments below.