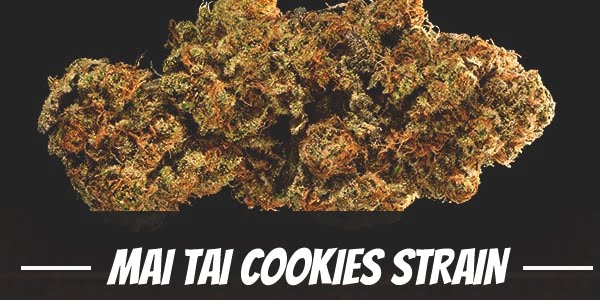 In spite of its fairly new appearance, Mai Tai Cookies is undoubtedly one of the most powerful medicinal strains in the market. Its high levels of CBD, coupled with its moderate THC, provides a wide array of relief to patients suffering from either chronic pain or mental health disorders like depression or anxiety. Not to mention, it has an impressive oil producing performance which is unique for a CBD-enriched hybrid. Because of this, it won the coveted title of ‘Best CBD Flower’ at the 2016 High Times Cannabis Cup in Los Angeles.

Its highly therapeutic effects and functional head high are attributed to ACDC, an elusive strain with a THC to CBD ratio of 1:20. Alien Cookies, on the other hand, contributed to Mai Tai Cookies’ impressive trichome production as well as fruity terpene profile. At the same time, it improves upon its offspring’s wake-and-bake potential.

While many turn to Mai Tai Cookeis as a pharmacological aid, the cocktail-inspired bud can actually give beginners and seasoned users a great recreational time. In fact, the word ‘Mai Tai’ actually translates to ‘very good’ in the Tahitian language. Albeit, a little mellow compared to its THC-buzzed counterparts.

Mai Tai Cookies does not have the most powerful of psychedelic highs. Its effects are quite subtle and, rather than a full-on head slamming effect, it delivers a subtle rush of energy from the head down to the toes. This is precisely why its 8% to 14% THC remains a refreshing wake-and-bake experience to beginners and seasoned users alike.

Its initial onset is a cerebral uplift that clears away distractions. For many casual users, the mental clarity is a chance to go through a few documents or brainstorm with a fresh perspective. And, with a heightened sense of focus, staying productive for hours without feeling beat down or tired becomes less of a challenge. One  may prefer to turn the head high into a recreational advantage as well. After all, it does inspire an innate sense of happiness that translates into a bout of giggles.

After about an hour or two, the same uplifting and invigorating buzz trickles down to the rest of the body. It unties knots in the muscles that prevent one from moving freely. Feeling like a well-oiled machine, users can pursue light physical tasks relentlessly even as the high subsides.

Mai Tai Cookies has a peppery scent with a spicy undertone that intensifies when the buds are broken apart. Once combusted, the sweet scent of fruit falling from its tree permeates the room. It has a tropical overtone with notes of cherry and orange peel.

Much like how it smells, Mai Tai Cookies washes over the palate with a subtle spiciness and strong hints of pepper. Although sharp at first, its acrid quality is later dispersed by the citric yet sweet taste of fruits. On the exhale, the delicious aftertaste of cherries grazed by orange peel coats the mouth.

Mai Tai Cookies usually leaves users feeling parched as its cannabinoids inhibit the production of saliva. It is usually accompanied by dry eyes too. Albeit mild and temporary, one may still manage its symptoms by staying hydrated throughout the day.

Although rare, Mai Tai Cookies can also green users out. The condition is characterized by heightened sensitivity that can lead to dizziness and possibly trigger anxiety. If left unattended, it can even lead to a subtle feeling of paranoia. For this reason, it is important to pace consumption of the bud.

With CBD levels ranging between 11% to 12%, Mai Tai Cookies is among the top medicinal strains in the cannabis industry. And, along with its psychoactive compound, it can manage symptoms for a variety of ailments.

Its happy high, for example, instills a sense of positivity that clears the mind of self-depreciating thoughts or overwhelming dread. As such, it is a source of comfort for people dealing with depression, anxiety, and PTSD. Similarly, its mood-boosting qualities also reduces stress.

The same cannabinoid compounds also reduce physical aches and pains throughout the body, beginning from the temples. It stabilizes turbulence in the stomach too to prevent users from vomiting. Hence, it is a great food companion to cancer patients dealing with the nauseating effects of chemotherapy. Meanwhile, its anti-inflammatory properties relax the muscles to keep it from painfully contracting.

Mai Tai Cookies possesses one of the easiest growing profiles in the cannabis industry. It is sturdy as well as short and compact. Not only can it withstand fluctuating temperatures, it can also fit in most indoor growing spaces. Hence, it is a remarkable choice strain for beginners trying out growing for the first time.

A Mediterranean climate is ideal when growing Mai Tai Cookies. It has the opportunity to soak up the nutrient-rich sunlight while being free to grow vigorously without the inconvenience or restraint of the four walls of a growing space. Still, many growers prefer cultivating the strain indoors due to its commercial and medicinal nature.

In a controllable environment, growers can adjust factors such as lighting, temperature, and humidity. However, it may need to be pruned often. As alluded to earlier, the strain is quite compact. If left unattended, it may harbor moisture that eventually develops into mold or mildew between its crevices which will stunt its growth.

Trimming and removing certain branches or fan leaves will not only improve airflow but also circulate light to the lower nodes. This will also vastly encourage nutrient distribution to healthier parts.

Mai Tai Cookies grown indoors yields around 12 to 14 ounces of fresh bud per square meter planted. This strain takes around 7 to 9 weeks to flower and be ready for harvest.

Mai Tai Cookies yields an estimated average of 14 ounces or more per plant cultivated. It can be expected to be ready for harvest from late September to around mid-October.

What are the origins of the Mai Tai Cookies strain?

Have you ever smoked or grown your own Mai Tai Cookies? Please let me know what you think about this marijuana strain in the comments below.