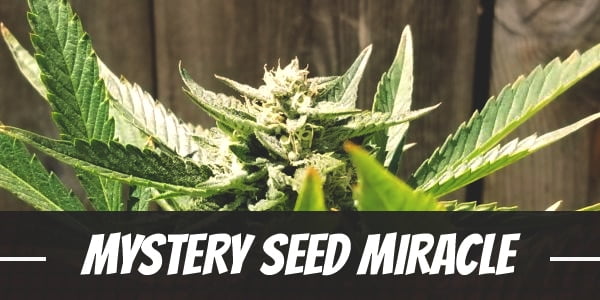 Have you ever grown mystery seeds? While people want to know the strains they’re cultivating, sometimes one or two mystery seeds come along and even the most disciplined grower won’t be able to resist.

The secret to growing mystery cannabis seeds is you need to be careful and give them the general care which should work for any strain: the right light, nutrients, climate, and air flow.

Regardless of whatever genetics your seeds have, operate under the assumption that mystery seeds have the potential for a high level of quality and quantity. However, it’s nearly impossible to get your buds to reach that potential if you use underpowered lights. Using powerful grow lights like HPS, LECs, or LEDs will help mystery seeds produce the densest buds.

Once you have the lights set up, you need to make sure you’re giving the mystery plants the right nutrients especially during the flowering stage.

The right ratios of nutrients during the veg and flowering stage will greatly increase your yield quantity and quality.

Maintain proper temperature and humidity too. Daytime temperatures need to be around 65 to 80 degrees F (18 to 26 degrees C) in the flowering stage. Most strains also do well if the night temperatures are kept around 68 to 75 degrees F. Temperatures which are too cool will cause bud rot which will damage or kill your mystery seeds.

Humidity is another thing and unfortunately, it stumps a lot of novice growers and causes several problems. Dropping below 40% will cause problems that look like nutrient deficiencies or light stress. This level of humidity will also increase trichome production in your buds.

Having one oscillator fan is ok for 1 to 3 smaller mystery plants but for a big grow with lots of hot lights, you’ll need a functional exhaust system to ensure proper airflow.

Two mystery seeds sprouted legs last June 21st and were placed in 3-gallon pots. As they grew, both were transplanted into Miracle Gro soil with a little perlite mix.

Sadly, one of them died. The lone plant was moved each day to get pretty much direct sun for as long as the sun was out.

The top was FIMed when the top began growing its 5th node. The new growths were pinched using fingers until they became two-headed beasts from then on.

At about week 10, diatomaceous earth was introduced to the plant to help get rid of some pests. And that would bring you up to speed with what’s happening.

Here’s a new update for the week. She’s getting some solid bud growth and the scents are coming out. The overnight growth blows the mind! In a couple hours, the sun will have her glistening beautifully.

It’s fair to say the stretch is almost over but security is becoming a problem because of the visibility and the increasing odor. Walkers-by can see the 4-footer at various angles. But that’s ok because they are showing shiny trichomes!

Starting to worry about losing foliage. The browning seems to accompany holes which were originally attributed to pests.

IF these are from bugs indeed, open up cloves of garlic and throw them around the plants. Bugs and other critters can’t stand garlic so if they decide to come around for a little midnight snack, they’ll avoid this plant.

Other than that, this lady is looking great!

Today marks her 7th week of flowering and she is showing developments all around!

Her buds are fattening up nicely too. It seems an outdoor grow is the hassle-free way to go. At least this way, you have the best lighting system ever – the sun!

How does this magnifying situation look? The growing buds are making this plant uber-thirsty for the past 10 days.

The amber pistils are a very new development and the photos don’t do justice to the actual swelling of the buds themselves. This budding phase is just beyond!

The plant is showing some yellowing. Yellowing fan leaves are normal towards the end of flower so the end must be very near.

Unfortunately, pulled 10 of these camouflaged worms off the plant. One bud is completely gone and others have started to get crispy and dark.

No more caterpillars today but there has been significant damage to some of the bud. It’s tempting just to harvest early so she can be given a good rinse.

These are some important facts you need to remember about pests in the future:

A good plan of action is to remove dead flowers and the poop underneath.

The house smells better than it has ever smelled! Got four of these bad boys!

Did the original fan leaf trim outside then trimmed down each branch of bud colas. Once inside, they were hung up on the backs of chairs. The buds underwent more in-depth trim. Each newly-trimmed cola was trimmed with a peroxide/water solution. The rinse had to be thorough to make sure the poop, worms, and eggs were gone for good.

The final dry weight is 95 grams!

Even if you don’t know which strain you’re growing, just follow the general guidelines to successfully grow any type of cannabis!

Have you ever cultivated a couple of mystery seeds before?