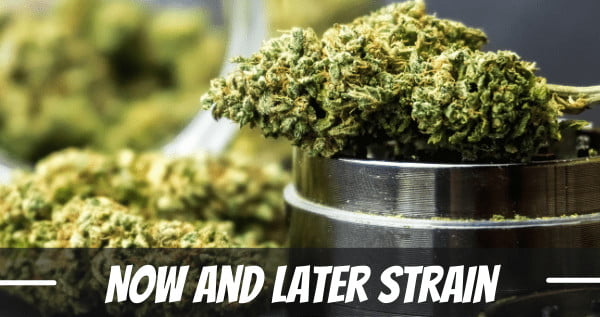 The Now and Later weed strain (aka Now & Later, Now N Laterz) is a rare hybrid with a THC content averaging 21%. It’s a potent strain, offering at least 20% THC even at its lowest.

Some reports of THC levels reach a high of 26%. Now and Later, developed by breeders Beyond Top Shelf, is the offspring of indica dominant Zkittlez and sativa dominant Abula.

These Now and Later strain genetics result in an evenly balanced hybrid that offers a satisfying high both physically and cerebrally.

Although the high settles into both the mind and body, the feeling is very indica leaning due to the intensity of the physical effects.

The terpene profile includes pinene, cymene, limonene, and terpinolene, with myrcene dominating. These terpenes work in tandem to deliver a trove of therapeutic benefits. We will discuss these further in this Now and Later marijuana strain review.

The terpenes also contribute to the delicious fragrance and flavor that the Now and Later strain is renowned for.

As the name Now and Later suggests, this is a creeper strain. Though you will feel the effects from the first inhale, it starts as a hint of what’s to come before slowly unveiling its full potency.

You’ll experience an initial burst of euphoria that uplifts the mind and soul without increasing energy levels.

This happiness precedes a sense of calm that washes over the body in waves until an intense tingling takes over.

This strain will make you feel at ease, tranquil, and somewhat inspired.

This soothing sensation eventually floods the mind and body to its depth, moving you from relaxation to sleepiness to couch-lock before sending you into a deep and rested slumber.

If you struggle with insomnia, fatigue, or restlessness, you’ll find relief.

The Now and Later weed strain is a favorite for muscular stress, such as headaches, spasms, cramps, and tension. It’s lovely for sour moods and general anxiety as well.

These benefits are thanks to the mighty terpenes and their anti-anxiety, anti-inflammatory, pain-relieving qualities.

Myrcene and terpinolene have sedating effects, while limone, cymene, and pinene act as mood boosters. You may also feel more talkative and giggly, as well as have the munchies.

Now and Later strain genetics include a cocktail of terpenes that combine to create an aroma layered with a multitude of scents.

The dominant fragrance is a sweet fruit, undercut by herbaceous earth.

When broken up and burned, the sweet citrus becomes tarter as a woody, rubber-like scent emerges. The result is a sharp yet enjoyable aroma.

One hit of this, and it becomes clear it’s no coincidence that this strain shares its name with candy. An array of flavors like apricot, grapes, watermelon, and citrus create a sugary taste reminiscent of a sweet dessert.

Notes of diesel, wood and spicy earth come through just before it becomes sickly sweet, leaving you with a full-bodied aftertaste that leaves you wanting more. You may also detect hints of cheese, pine, and roasted nuts.

Now and Later is not a strain for beginners, and even veteran users should approach with caution. Not only does this one sneak up on you, but its effects are long-lasting.

If you’re not careful, you can find yourself amid an intense, locked-in high that can be overwhelming and feel like there is no end.

Now and Later cannabis can cause paranoia and concern, especially in large amounts. It’s best used in the evenings or on go-slow days, as you’ll continue to unwind until you come to a complete stop.

The best approach with Now and Later is slow and steady until you have determined where your tolerance lies.

Although the effects section of this Now and Later strain review talked about using it for headaches, some say it can cause headaches.

Drinking plenty of water ensures the body stays hydrated and will reduce your chances of experiencing this adverse side effect. More commonly reported side effects were dry eyes and dry mouth.

Now for the disappointing part of this Now and Later marijuana strain review – seeds are not readily available. Finding this one will not be an easy feat. Those who do conquer this hurdle will find the plant to be quite strenuous to grow. Though it can be grown indoors, outdoors, and in a greenhouse, it requires plenty of attention and technique.

If you’re new to growing marijuana, this one might be more of a frustration than anything else.

For experienced growers, you’ll find her to be quite volatile and demanding, so consider your skillset before embarking on this venture.

The plant is dense and coated in a sugar layer of sticky trichomes.

While this may get you excited about the exceptional flavors and effects to come, it means you have to be on the lookout for wilting, mold, and mildew powder.

Now and Later is not a very resilient strain and requires regular pruning.

You also need to be meticulous about keeping the correct humidity levels, following the photoperiod cycle, and setting up adequate netting to support the plant and prevent wilting (especially during the flowering stage).

Constant training, care, and observation is required to ensure your plant flourishes.

Plant growth is steady, but intervention is needed to ensure colas are well-cared. The plants are most at risk during the flowering stage, so take the necessary precautions to facilitate production.

Flowering time is around 65 days, though some cultivators have noted flowering occurring between 70-79 days. Successfully crops will yield 0.5-1 OZ/FT2.

The plant will be ready to harvest after 12 weeks, and yields will be 1-2 OZ/plant.

FAQ’s about Now and Later Strain

Is Now and Later indica or sativa?

What is the Now and Later strain yield?

What are the origins of the Now and Later strain?