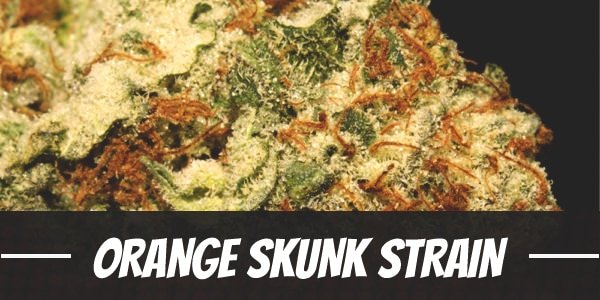 The skunk that we have grown accustomed to are black and white. But there are others that have brown, grey, or cream colors. In the cannabis community, there is one that comes in orange.

For many people, orange is an attractive color. Sure enough, the orange hairs covering the bud is indeed a sight to behold. However, its name is more because of the incredibly delightful scent of orange that it emits.

The orange influence is, of course, a trait inherited from one of its parents – California Orange. In referring to this strain, many people like to call it old school as it first made its appearance back in the 80s. Over the decades, it was also called by several other names – Cali-O, Cali Orange Bud, C.O.B., and Californian Orange. It is also notable for its clear-headed high.

Meanwhile, the influence of its other parent Skunk No. 1 is undeniable. Not only is it evident in its aroma, but also in the making users feel energetic. If California Orange is old, then Skunk No. 1 is even older by at least one decade.

In mixing up the genetics of California Orange and Skunk No. 1, the result is a strain that not only highlights some of the best traits of the parent strains but also to distinguish itself with its own distinct effects.

Generally, Orange Skunk is deemed as an average to potent strain with 12% to 16% THC. However, there are also some tests that show its level to be as high as 22%, an insanely high amount that should no doubt thrill the recreational users. In essence, it takes people on a ride without falling off the edge.

At its onset, users should feel an uplifting mental buzz that results in an overall sense of bliss. In an instant, the head clears and most people also have heightened sensations. With a laser-like focus, they are very much aware of the surroundings. Most users are also able to function and do their tasks. In fact, some people feel they are more motivated to do so.

Orange Skunk also works as a mood-enhancer. Feeling uplifted, they are also likely to feel very happy and cheerful. Used in moderation, it is actually an excellent party strain.

As the Indica side works its way to the body, some people may feel a tingling sensation in the back of their neck going down. It leads to a mild body high that induces feeling physically relaxed.

Some people who may end up using more than is adequate may have an intense and ebbing cerebral buzz. However, it does not seem to lead to narcotic-like effects in which users end up with hallucinations.

When people talk about the best smelling strains ever, California Orange is sure to pop into the conversation. Orange Skunk has that to thank for. It also has a subtle skunky odor to go with that same orange scent that has been delighting people throughout the past three or four decades.

It will be a pity if its flavors fall short of expectations. Imagine taking a breath filled with its fantastic scent. That is how Orange Skunk tastes. Its citrusy orange flavors with a hint of wood are not going to disappoint anyone.

Beautiful to look at and even better to smell, Orange Skunk does come with some adverse reactions that users would rather not have. However, that is a fact of life when using cannabis. It causes people to have dry mouth and eyes.

Also, compared to others, Orange Skunk is more likely to cause headaches especially when one overuses. To a much lesser degree, it is also possible to experience mild dizziness or feel a little paranoid.

As the strain induces an uplifting high, it also shifts the mind away from any discomforts – both physical and psychological.

It does not possess much of CBD, though. Still, many people find it helpful in dealing with pain. Most likely, it is due to the euphoric cerebral buzz in which users tend to ignore mild discomforts. Although it comes with only a small Indica side, it exerts enough to help reduce tensions and soothe aching muscles. So, besides resulting in body relaxation, it may also help with pain relief.

Because of the happiness that sets in, people dealing with emotional issues should find it easier to manage their feelings. Such trait is vital for people who are undergoing stress. Furthermore, it is also useful to people with depression and related conditions.

For a Sativa-dominant strain, Orange Skunk has a relatively quick flowering time. It grows well indoors and outdoors. Even better, it produces an abundant yield of resinous buds.

On its appearance, it is best to place it in a cool place before it starts to flower. With that, the plant will produce maroon and purple hues.

Orange Skunk has an indoor flowering time of 8 to 9 weeks. It will need more tending than usual to keep it not only bushy but also to trim and prune some leaves to allow for better ventilation and more lights to reach hard to reach parts. Once ready, it will produce up to 24 ounces of buds.

In the backyard or the garden, the plant thrives best in a warm environment. It can tolerate colder temperature, but that is best done later on during the vegetative stage. The flowering time occurs during the last days of September with each plant producing an insane yield of up to 40 ounces of buds.

Have you ever smoked or grown your own Orange Skunk? Please let me know what you think about this marijuana strain in the comments below.