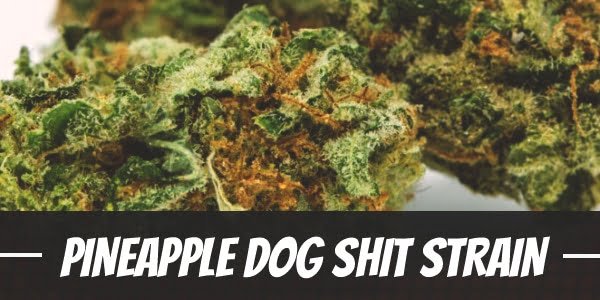 Canine poop is disgusting. But, that is not the case with Pineapple Dog Shit (also called Pineapple Dawg Shit). In fact, it is one of the most pleasurable hybrids for recreational and medical cannabis users. Although the name is mainly due to its distinct, pungent aroma, a nice blend of tropical flavors contrasts it markedly.

A highlight of this Sativa-dominant hybrid is the powerful psychedelic effects it offers to users without feeling drained. And, coupled with its unique fragrance and complex flavor, this hybrid has earned quite a reputation among both enthusiasts and cannabis connoisseurs alike.

Bred by an unknown breeder, Pineapple Dawg Shit is a cross between two old school hybrids. The tropical flavors are, in fact, an influence of Pineapple Punch created by the Flying Dutchmen. Chemdawg 4, meanwhile, played a huge role in passing on the Sativa genes.

Pineapple Dog Shit is perfect for use with friends during the day. Being a powerful mood-enhancer, it turns even the Grinch into a cheerful fellow.

On average, Pineapple Dog Shit contains some 19% THC. However, some buds have tested to hold as much as 26%. There is no doubt that like Chemdawg 4; it is an incredibly potent hybrid.

The quick onset of the psychedelic high is mostly euphoric and quickly alters the mood. Apart from feeling cheerful, it also influences users to be sociable. It also causes people to be verbally expressive. Powered by a seemingly endless supply of energy, most also find themselves more active.

In moderation, the cerebral buzz of Pineapple Dog Shit should remain incessant but never overbearing. Even as it allows for a clear mind, it further boosts the ability of people to focus and lock on to tasks or chores.

Following the intense mental stimulation is a calming body high. It is pronounced and can give an uplifting sensation but not in a way as to cause laziness, let alone lethargy. As it blends seamlessly, it may as well be responsible for keeping the psychedelic journey in check.

As stated, this strain is notorious for the weird pungent smell it emits which is sour and tar-like. Covered in think crystal resins, expect to get punched by this smell with just a whiff of the buds. But after getting past it, the flavor usually more than makes up for its unpleasant fragrance.

Pineapple Dog Shit thankfully tastes more like pineapple than dog shit. Added in the mix is a tropical, earthy taste as well as a sweet blend of honey and citrus flavors that users find delightful in contrast to its unusual smell. For some people, the smoke may be a bit harsh on the throat and result in occasional coughing while taking a hit.

Pineapple Dog Shit is not any different in that it can cause slight dryness of the throat and the eyes. Hence, it is best to stay hydrated when using cannabis. Besides that, it is also possible that some people may feel the world spinning. Usually, this occurs once the euphoric high slams into the head.

Typical of mostly Sativa hybrids, and one that is as potent, it could also make users feel a bit anxious. Some may even feel paranoid. Often, these are mild and not at all threatening. Far from it, some users find it a much more thrilling experience.

The CBD content of Pineapple Dog Shit is not remarkable in the sense that it is insanely high. However, it is more than adequate in giving comfort to users. For instance, it is helpful in soothing or relieving body pains including PMS.

On the other hand, its high THC content has more value in psychological and emotional difficulties. As it brings on a euphoric rush and uplifts the mood, it does not take users long to forget about stress. It is also in this way that it helps people cope with depression, anxiety, and other mental health issues.

The energetic high of Pineapple Dog Shit can indeed help in battling fatigue. And, in some cases, even lethargic patients undergoing chemotherapy can benefit from its revitalizing effect.

At no time does the hybrid cause people to feel lazy. Even when the Indica traits manifest, users tend to stay on the go. The clear-headed high complemented by the ability to focus helps improve the concentration of people with ADD or ADHD.

Pineapple Dog Shit thrives best in a warm climate. While it is possible for beginners, it will take a bit of effort to learn not only the basics but also some advanced techniques.

Outdoors, it can grow quite tall. Consequently, indoor growers will want to make sure to have enough space to accommodate the plants. Of course, topping it as soon as possible is a necessity and so is training it to promote lateral branching.

Smelling like dog poop is one thing. But because it is pungent, it may attract unwanted attention from neighbors. If that is a foreseeable concern, then the best is for growers to plant it inside the house. At the very least, install a decent carbon-activated odor control filter on the vent of the tent.

As for securing its seeds, at the moment, it does not appear to be in the market. Exercise due diligence before purchasing if it starts popping out. Already, there are far too many shady vendors selling poor quality or fake seeds.

Once the bloom phase begins, it should last 8 to 10 weeks. As soon as it is ready, the estimated yield per square meter is up to 12 ounces.

Out in the open where there is adequate sunshine, harvest time likely falls on the last week of October to the first week of November. Each plant producing up to 12 ounces of buds is a reasonable expectation.

Have you ever smoked or grown your own Pineapple Dog Shit? Please let me know what you think about this marijuana strain in the comments below.