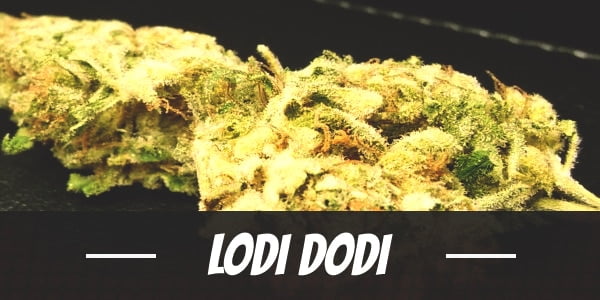 Lodi Dodi is a mostly Sativa hybrid that delivers an energetic cerebral high. Unfortunately, the original breeder never disclosed its lineage. It is also not widely available at the moment outside of Washington, let alone the world. Nonetheless, the psychedelic effects combined with its fruity aroma makes it a promising strain.

In some circles, credit for breeding Lodi Dodi goes to the Clone Zone. However, it appears that there are many other companies which have produced the same variety. Whether or not these are exact duplicates is impossible to determine.

Of the several breeders, one that appears to have a better market penetration is Soulshine Cannabis. Outside the United States, they may not be familiar. However, within the domestic marijuana industry, they are notable for the environment-friendly packaging of their products – one of which is Lodi Dodi.

Based on its aroma that is reminiscent of the tropics, some people think the Hawaiian Sativa may be one of its predecessors. In the case of Soulshine, they used Trainwreck and Haze. It is the specific variety that most people are likely to come across.

Lodi Dodi is a highly potent strain and a fast-acting one at that too. Not too long after smoking or vaping, it ushers in a euphoric cerebral high. It may be quite intense but rather than crippling users, it helps clear the mind. Not only that, but it also promotes a keener sensitivity as well as heightened focus. The energizing buzz that surges into the body can power up tired souls for a fun-filled productive day.

Typical of a Sativa, Lodi Dodi makes for an excellent mood-enhancer. Apart from the mental stimulation, it also promotes a sense of well-being. Its intensifying psychedelic high then leaves users feeling euphoric.

Although it has a relatively less Indica side, recreational users should not underestimate its capability. Under normal circumstances, the physical effects complement the mental stimulation by putting the body at ease. In doing so, it further enhances the mood with an uplifting sensation.

Lodi Dodi contains as much as 23% THC. As incredibly potent as it is, the psychoactive properties are not likely to become overbearing. In instances when some people do end up using too much, then all bets are off. If the intense mental buzz does not cripple the user, then its sedating body high can certainly put one on a couch-lock.

Lodi Dodi’s strong scent is best described as sweet and fruity, similar to the distinct aroma that Hawaiian strains produce. Although, what sets it apart is an earthy, herbal scent that is emitted. In large numbers, they produce a pungent perfume all around.

Like a plate of fruit salad, Lodi Dodi is widely recognized for its range of tropical flavors. Although sour citrus piques the palate, it is balanced by sweet notes of honey. However, drawing in the smoke may cause bouts of coughing.

Users of Lodi Dodi may have to brace themselves for headaches, dizziness, and maybe anxiety. As a Sativa-dominant strain, its effects center largely on the mind. However, these can easily be avoided by handling the strain wisely. It also helps to know how tolerant one is to THC.

Other than those mentioned above, marijuana use also causes dehydration which is usually evident in the drying of the eyes and the mouth. This is nothing unusual as smoke from all kinds of strains usually causes dehydration. Moreover, such effects are barely noticeable.

Those who suffer from stress and depression will greatly benefit from toking Lodi Dodi. Though it has low CBD levels, its psychoactive compounds induce a happy high that crushes negativity and enhances moods. This mental stimulation is also instrumental in getting rid of headaches.

From its Indica heritage, Lodi Dodi has the ability to appease a few physiological issues like fatigue. Soothing the muscles, it effectively relaxes users and eases any existing tension in the muscles.

It can also work as a sedative. Completely comfortable, most users end up falling asleep. For this reason, it can be of great help to those with trouble sleeping. It may even work better than synthetic sleep aids.

Lodi Dodi is an elusive strain. Its seeds are not readily available in online and local dispensaries. As such, the only way to cultivate it is to obtain a cut from one of the breeders.

With knowledge of multiple growing methods, seasoned growers can help the bud achieve its full potential. For example, indoor growers may keep the plant short by topping it early. Pruning it properly also promotes lateral branching. Outdoors, cultivators will have to watch out for pests and sudden changes in temperature.

A week or two into the blooming phase, Lodi Dodi’s buds turn forest green in color. This contrasts beautifully with the orange pistil hairs and iridescent amber trichomes surrounding the round nugs.

This strain has a flowering period of 10 to 12 weeks indoors. At harvest, it yield may reach 12 ounces per square meter.

Lodi Dodi’s buds can be harvested by October, during which growers can expect at least 12 ounces per plant in the field.

Have you ever smoked or grown your own Lodi Dodi? Please let me know what you think about this marijuana strain in the comments below.