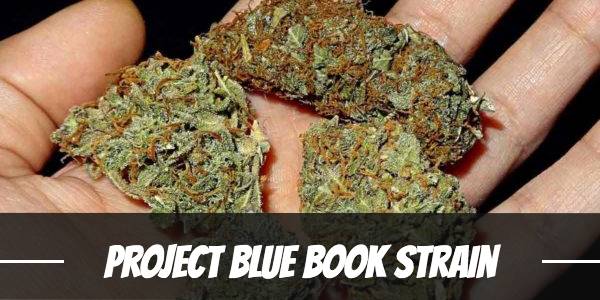 The sativa dominant Project Blue Book delivers a clearheaded high that not only enhances focus, but also instills a sense of calm. Its benefits are clearest when it is used as a wake and bake companion. But it could also jive well with recreational enthusiasts. In removing distractions and negativity, it improves the mood greatly which leaves users feeling social and upbeat.

Its name is apt too, as though it were an extension of the organization its parent is named after. Majestic 12 is a purple-hued strain with an extremely relaxing effect on the mind and body. Meanwhile, Blue Dream has a dreamy high that soothes the mind with its calming euphoria. It also produces a bit of energy that gets users through the day.

Download my free Grow Bible and grow your own Project Blue Book!

Project Blue Book has versatile THC levels that range from 14% to 22% which caters to enthusiasts of all levels. It delivers a euphoric head high that instantly uplifts the mood within minutes after the first few tokes. It clears the mind of negativity while instilling a calm but upbeat disposition. Using it with friends will undoubtedly ensure a good time.

Casual users may perhaps gain the most from toking the Sativa-leaning strain. Its clarifying head high sharpens the senses, improves focus, and increases motivation.  It also provides a space for thoughts to flow which inspires a surge in creativity.

Despite the hours that pass, Project Blue Book’s effects do not wade away. It continues to relax the muscles with its buzzing sensation in the background. The freedom from inhibition makes it easy to perform light physical tasks.

Project Blue Book is sweet. It pairs an enticing berry smell with a floral undertone to counter the subtle sourness. Breaking apart the buds reveals a blend of coffee and tea that eventually turns into an earthy smoke upon combustion.

There is a clear distinction between Project Blue Book’s herbal and fruity flavors. If anything, it is like drinking a cup of coffee or tea while eating berries on the side. It is generally sweet with a hint of sourness blunted by the strain’s floral and earthy undertones.

Red, dry eyes and a cottonmouth are common reactions to Project Blue Book’s moisture-inhibiting cannabinoids. Seasoned users often ignore the subtle irritation due to its typicality and mildness, but beginners may want to prepare a tall glass of water and stay hydrated throughout the day. Due to its potent cerebral effects, it is also possible for users to feel a little anxious. Avoiding this unwanted offshoot can be done through moderation.

Stress and depression go hand-in-hand. Often, both are comorbid conditions that could lead to the development or worsening of either. As such, treating or managing the symptoms of one usually helps control the other.

Project Blue Book could assist users with this end. It has an uplifting head high that instantly improves the mood while also stabilizing turbulent emotions and eliminating the overwhelming despair that often comes with both conditions. Long-sufferers of anxiety and PTSD will also find an unlikely comfort from it as a result.

A natural analgesic and anti-inflammatory, Project Blue Book relieves aches and pains all over the body. It reduces sensitivity, twitching, and cramps while also addressing issues such as arthritis, joint pains, and inflammation. As such, it could be a viable companion against muscle spasms.

Upping the dosage turns the soothing relaxation into drowsiness. It makes the eyes droop heavily until users eventually fall asleep. People suffering from insomnia will benefit from its sedating properties as it not only tucks one to bed, but also improves the quality and quantity of sleep.

Project Blue Book is a stunning strain. Once it begins to flower, users can expect the signature neon green buds that are associated with Sativa strains. Further accentuating it are its golden undertones which stem from flashes of yellow and orange pistils. A thick coat of trichomes complete the spectacular look.

The plant, itself, tends to stretch upward toward the light which makes it grow quite tall. It is quite thin too especially its stalks and branches. In spite of this, it has excellent immunity against common pests and diseases. It also does not break off easily even in the face of strong winds when cultivated outdoors where it is exposed to the elements.

Plant it indoors is a which allows for better adjustment to certain factors like temperature, lighting, and humidity. Seasoned growers may apply advanced techniques like the Screen of Green which not only provides support, but also manages the plant’s height well. It also keeps the vegetative phase short without affect the yields.

Aspiring growers may want to install a carbon filter. Although it has a tantalizing aroma, it could become too pungent as its sour overtones could fill the room and overwhelm the senses. Having a proficient ventilation system will also reduce the odor and improve air circulation indoors.

It takes Project Blue Book between 10 to 12 weeks of flowering for its buds mature. The wait is well-rewarded though as growers can harvest at least 12 to 16 ounces of buds per square meter.

Project Blue Book produces at least 16 ounces of buds per plant at harvest, which usually falls around the last few days of October to the second or third week of November.

What is the Project Blue Book strain yield?

How much THC does Project Blue Book have?

What are the origins of the Project Blue Book strain?

Project Blue Book was created from a cross between Blue Dream and Majestic 12.

Have you ever smoked or grown your own Project Blue Book? Please let me know what you think about this marijuana strain in the comments below.