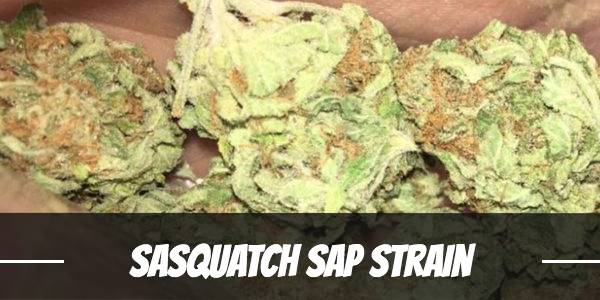 This sativa-dominant strain gets its name from the Sasquatch, also known as Bigfoot or Yeti, which is an ape-like creature that gives off a foul smell and leaves footprints as it moves silently in the wilderness. Of course, this is just a story borrowed from North American folklore and its existence has yet to be proven.

Despite being seemingly unrelated, Sasquatch Sap’s big buds give off a pungent aroma that can be off-putting to some. However, many agree that underneath its intense diesel and skunk overtones is a blend of fruit and chocolate that prepares one for its psychoactive high.

With THC levels averaging at a stable 15%, Sasquatch Sap is no doubt powerful but not at all debilitating. Instead, it has a buildable buzz that enthusiasts can increase or decrease depending on the type of effect preferred. Regardless, moderate usage allowing beginners and seasoned users to enjoy a productive buzz that crosses off tasks on one’s to-do list.

Its chocolatey goodness could be attributed to Chocolate Diesel. The Sativa-leaning strain provides the same comfort as a cup of hot cocoa or coffee. Complementing the mood lift and cerebral clarity is Chem’s Sister. Not only does it energize users, but it also instills a goal-oriented disposition with its creative euphoria.

Sasquatch Sap wastes no time. Within minutes after the first two to three puffs, it induces a stimulating buzz that awakes users from lethargy. It clears the mind of negativity and chaos too as it swarms the temples before moving behind the neck and down to the lower extremities.

There is a noticeable change in disposition as an innate sense of happiness turns one upbeat. Along with the mental clarity, it inspires a surge in creativity as it encourages thoughts to flow and form freely. The sharpened senses allow users to scrutinize fresh perspectives and new ideas while also enhancing focus.

Even after an hour or two, the initial rush of energy does not disappear. However, it does slow down into a low hum as opposed to its lightning fast start. Apart from invigorating users, its subdued bodily effects also release the body from aches, pains, and tension so one can move around comfortably.

Overall, Sasquatch Sap is a morning strain. It clears the mind, improves the mood, and generally readies users for the day ahead. Although, one could also choose to use with like-minded friends for fun-filled time.

Sasquatch Sap has a complex flavor profile. Mainly, one can differentiate the notable fruitiness of pears intermingled with a sweet chocolate. Breaking apart the buds or combusting it opens the senses to a sharp diesel and an earthy undertone.

The sour diesel-flavored smoke is quite harsh upon consumption, causing a bit of coughing on a beginner’s end. However, it quickly dissipates into a sweeter chocolate flavor blunted by the mildness of pears. On the exhale, it is rather earthy.

Toking Sasquatch Sap leads to the mild dryness in the eyes and the mouth. It can sometimes be uncomfortable due to its long-lasting nature, but users may manage it by staying hydrated. There may also be a possibility of dizziness, anxiety, and potential paranoia depending on the dosage. Keeping it low will reduce any chances of greening out.

Sasquatch Sap is an uplifting strain. It helps users reduce stress and manage the despair that often comes from work or dealing with an ailment. It also induces a soothing buzz that clears the mind of its worries, instilling a calm disposition.

Long-sufferers of depression, anxiety, and PTSD will find comfort in its mood-enhancing capabilities too. It works impressively as a anxiolytic, anti-depressant, and antipsychotic. It improves the mood while stabilizing feelings of inadequacy, hopelessness, or despair.

It also appeases different types of aches and pains. As a natural analgesic, it effectively appeases stomachaches, headaches, migraines, arthritis, and joint pains. Paired with the initial invigoration, it awakens the appetite of users who suffer from cachexia or eating disorders like anorexia.

People with insomnia could also benefit from the deep relaxation. It induces a drowsiness that tucks users right to bed. Its sedating properties also improve the quantity and quality of sleep so one feels energized the next day.

Sasquatch Sap is a lanky plant. Its stalk tends to remain quite thin but grow tall to a towering height of up to 6 feet. It also tends to have long internodal spaces as a result. This is not at a setback though as it means better air circulation.

It works best with the Screen of Green method. The setup helps manage its height while also distributing light evenly to the lower nodes by bringing it up then weaving it into the screen above the plant. Gently coaxing the cola and topping it, or removing the top colas early on, will create multiple budding sites and shorten the vegetative phase without negatively affecting yields.

With regard where it should be cultivated, growers rarely face problems. It is a highly adaptable plant that has no trouble adjusting to an indoor or outdoor setting. It loves the sun and it would do well for one to mimic a Mediterranean climate when growing Sasquatch Sap in a dedicated tent or room. There is no need to deviate from the usual feeding or nutrition practices, but it will benefit from boosters. As for its energy, usually the light provided by the sun is enough while a 600-watt HID light should do for the flowering period.

As it nears harvest, the flowers become denser and adapt a mint color with flashes of forest green hues. Peppering all over the buds are rustic pistils and a light sprinkle of trichomes that give it a subtle glow.

As for its energy, usually the light provided by the sun is enough while a 600-watt HID light should do for the flowering period. As it nears harvest, the flowers become denser and adapt a mint color with flashes of forest green hues. Peppering all over the buds are rustic pistils and a light sprinkle of trichomes that give it a subtle glow.

It takes Sasquatch Sap between 10 to 12 weeks of flowering for its buds mature. The wait is well-rewarded though as growers can harvest at least 12 to 16 ounces of buds per square meter.

Sasquatch Sap produces at least 16 ounces of buds per plant at harvest, which usually falls around the last few days of October to the second or third week of November.

What is the Sasquatch Sap strain yield?

Sasquatch Sap yields 12 to 16 ounces per square meter indoors and 16 ounces or more per plant outdoors.

How much THC does Sasquatch Sap have?

What are the origins of the Sasquatch Sap strain?

Sasquatch Sap was created from a mix between Chem’s Sister and Chocolate Diesel.

Have you ever smoked or grown your own Sasquatch Sap? Please let me know what you think about this marijuana strain in the comments below.