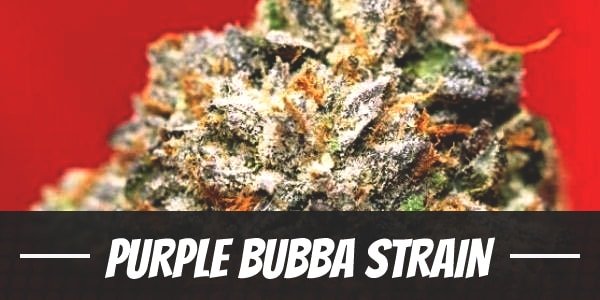 Purple Bubba is the best companion for a day riddled in anxiety. It has a tranquilizing head-to-toe high that calms away worries while soothing the body of its aches and pains.  A few puffs of its potent smoke is usually enough

Creating the strain was a long process but quite easy. Breeders only needed to use a strain with heavy-hitting effects that could blanket users in relaxation within minutes. And, what better choice was there than Bubba Kush? Purple Kush was later added to improve its bitter terpene profile of coffee. The latter has fruity flavors and scents that dominate the senses. Not to mention, it added color back to the strain.

With THC levels ranging between 21% to 25%, Purple Bubba has the potential to be overwhelming. Using it beyond limits can lead to a powerful couch lock that makes it difficult to move around altogether.

Purple Bubba delivers a heavy-hitting high that leaves users feeling sleepy once its effects settle. Because of this, it is essential for one to only use it after work or during a day off. Otherwise, it can be counterproductive.

With that said, the Indica’s onset starts off with a gentle head high. It uplifts the mood and releases all the accumulated stress. The rush of euphoria, which intensifies after 15 minutes have passed since the first toke, inspires an innate but deep sense of happiness.

Having snacks prepared ahead of time will greatly benefit users. Although subtle, the head high has a stimulating effect on the stomach. It encourages a ravenous appetite that allows one to eat heartily. With food nearby, enthusiasts need not head down to the kitchen to grab a bite and risk a body melt on the spot.

After about an hour or two, a tingling sensation from the temples gradually begins to trickle down. It soothes the muscles as it surges throughout the body. Blanketing users is a intensely deep relaxation that makes the eyes droop. A heaviness eventually plants itself in the limbs. In all likelihood, it will make users drowsy as it continues to persist.

Purple Bubba has a sweet and fruity overtone that instantly reminds one of berries. It has subtle sour undertones of grape too which intensify once the buds are broken apart. It becomes increasingly pungent upon combustion.

Enticing the palate is a fruity flavor that intensifies as one continues to draw in its smooth smoke. There are hints of grapes blended with berries along with a mild sourness. On the exhale, it leaves a sweet aftertaste in the mouth.

Arid eyes and a cottonmouth are two typical experiences one has while smoking Purple Bubba, or any strain for that matter. Moisture-inhibiting properties found in cannabinoids cause the dry spell. Thus, the two side effects are usually unavoidable but can be managed by downing a few glasses of water throughout the day.

A more uncommon experience with the strain is greening out. The condition, which is characterized by dizziness, anxiety, and mild paranoia, usually comes about as the result of overconsumption. Hence the reason why users should always use the strain with caution.

Being constantly exposed to stress can lead to the onset or exacerbation of unfavorable health conditions such as anxiety, depression, and hypertension. Because of this, people must always find ways to relax once in a while. Otherwise, it can become too much of a problem once it has chronically accumulated.

Purple Bubba is a great strain to unwind at the end of the day or week. It delivers a soothing euphoria that calms the mind, relieving the stress while reducing the overwhelming anxiety that stressors trigger. Its ability to uplift the mood and clear the mind also contributes to its use as an anti-depressant that manages symptoms of depression and other mental health issues like PTSD.

Apart from the behavioral, the Indica is of significantly value to people suffering from chronic physical aches and pains. It has an analgesic and relaxing effect that effectively appeases any pricking, stinging, or throbbing.  In soothing the muscles, it also gets rid of contractions that result in painful cramps. These spasms also lead to turbulence in the stomach that eventually result in vomiting. Because of its anti-emetic properties, Purple Bubba is of great comfort to cancer patients who deal with the nauseating after effects of chemotherapy.

Purple Bubba has the typical structural profile of an Indica. It is short and sturdy with a frame that can withstand various unpredictable growing conditions. Moreover, it has a natural propensity for cool weather. Because of this, it grows quite well in the gardens or farms in the northern hemisphere.

Indoors, its bushy foliage can sometimes get in the way of light and air circulation. Thinning out the plant through either pruning or trimming will help aerate the lower nodes while distributing light to the budding sites. Installing brighter lights with higher intensity can also be of great help in encouraging the plant to grow. Meanwhile, a more efficient ventilation system ensures moisture gets out so it does not eventually form into mold or mildew. At the same time, it ensures the room is without a pungent scent.

Controllable environments also allow growers to choose between different types of mediums. Hydroponics, for example, will encourage faster growth since it delivers nutrients directly to the roots. It also doubles bud and trichome production. However, it is plants that are grown in soil that produce the most delicious buds.

TIP: Looking to buy seeds like Purple Bubba? Check out our seed bank

During the flowering period, Purple Bubba produces bright, forest green nugs with a thick coat of trichomes. However, growers may also bring out its purple hue. Lower the temperature gradually or as the plant nears full maturity will reveal its royal colors.

Purple Bubba has an indoor flowering period of 7 to 9 weeks. Within this short time, growers can expect it to produce at least 10 to 12 ounces of buds per square meter at harvest.

Purple Bubba flowers from the last week of September to the middle of October. Once fully mature, it yields at least 10 ounces of buds per plant.

Have you ever smoked or grown your own Purple Bubba ? Please let me know what you think about this marijuana strain in the comments below.