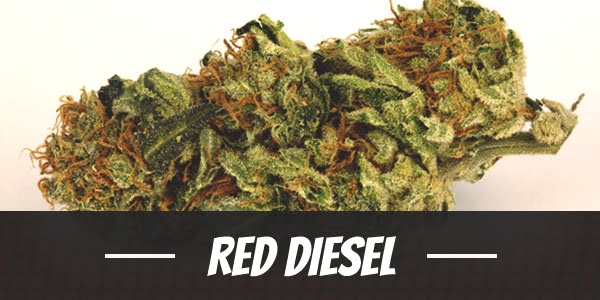 NYC Diesel, tracing its roots from Afghani and Mexican landrace varieties, has won the Cannabis Cup five times. From its profound cerebral high to the deep relaxation it provides, it is arguably one of the best hybrids in the world. Even so, the breeders at Barney’s Farm thought they could improve its potency. So, they set out to develop a new hybrid called Red Diesel.

Introducing new genetics to an already illustrious hybrid is not a matter of picking one that has the wanted traits. So, the selection of an appropriate strain is as crucial as the breeding process itself. In the end, they decided on California Orange. Known for its exceptional mental and body effects, it also boasts of a delightful citrusy orange aroma.

Once released to the market, Red Diesel quickly gained traction in the cannabis community with its unique fragrance. Like its contrasting scent, it also induces the best of both worlds. Like its predecessors, it first brings people on a euphoric high before settling down in relaxation.

Typically, people describe the effects of marijuana as mentally stimulating or relaxing. In the case of Red Diesel, it is both and then some more. One thing that users should know ahead of using it for the first time is that it can cause a severe case of the munchies. Having said that, it is best to have some food nearby.

A balanced hybrid, the onset of Red Diesel begins with a euphoric mental buzz. While profound, it is also not overwhelming. Besides stimulating the mind, it also ushers unlimited energy. It promotes mental clarity and inspires creative thinking. Consequently, it motivates people to stay active and productive.

Throughout the mental high, the physical effects of Red diesel work itself into the body gradually. In time, as users feel relaxed, it also enhances the mood. In fact, many users think this hybrid is among the best mood-enhancing strains worldwide. Used within limits, it is not likely to lead to a couch-lock. For these reasons, it became a popular strain served in the infamous Amsterdam cafes.

Users should never underestimate Red Diesel though. While it typically does not induce an extreme psychedelic experience, it is nevertheless a potent strain. With up to 19% THC, it can become overwhelming if some people end up using too much.

A love affair with a strain begins with its smell. Red Diesel comes with the classic earthy and fuel odor with a spicy and minty note. Obviously, it is an influence of NYC Diesel. The introduction of California Orange to its genetics also brought about a slight citrusy aroma.

The same captivating aroma of Red Diesel is apparent in its taste. A little less pungent, its citrusy orange flavor is more profound and certainly pleasing. While not harsh, its smoke can deliver an intense hit when drawn.

If there is a weakness, then it is that Red Diesel may cause a mild headache. Additionally, it is not exempted from other typical adverse effects such as dry mouth and eyes.

One thing to note too is that due to its potent Sativa effects, it may also cause some people to feel a little paranoid or more anxious.

For many people, the best of use Red Diesel is to wipe out stress. Like recreational users who wish to unwind or chill, it benefits those who are undergoing a tremendous amount of pressure. Not only that, its mood-enhancing properties makes depression and similar conditions easy to manage.

Although it is not known to be an excellent pain reliever, it does help but only in mild cases.

As mentioned earlier, Red Diesel can cause munchies. As such, it becomes beneficial to people with a need for an appetite stimulant.

Red Diesel, for all the beautiful traits it brings, is not for beginners in cultivating marijuana. However, that is not to say that it is impossible unless one has the requisite knowledge. It does need attention and lots of care much more than the easy-to-grow strains.

Barner’s Farm, besides improving the potency of NYD Diesel, also developed Red Diesel to have heavier buds. As such, it may need support during the flowering period.

The Red Diesel’s flowering time indoor is 9 to 10 weeks that is typical of Sativa plants. Its production though is off the charts. Cared for properly, it can product up to 21 ounces of buds per square meter.

Expect the flowering time of this gem during the second week of October. In a warm environment where it thrives best, each plant can product up to 21 ounces of buds.

What is the yield of the Red Diesel strain?

How much THC does Red Diesel have?

What are the origins of the Red Diesel strain?

Red Diesel was created from a cross between NYC Diesel and California Orange.

Have you ever smoked or grown your own Red Diesel? Please let me know what you think about this marijuana strain in the comments below.