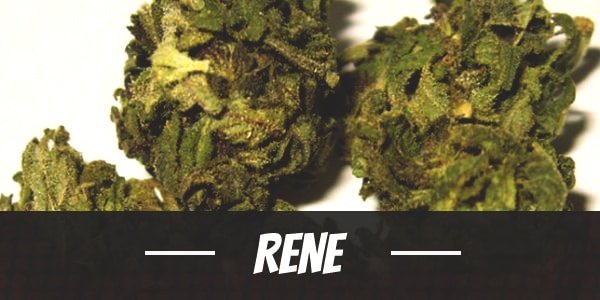 House of the Great Gardener (H.O.T.G.G.) has always aimed to develop breeds that are of significant value to the medical cannabis community. Among the features that many of their strains share are possessing a much higher than average CBD content. While Rene does not have a high CBD, nonetheless, it was used by the breeder to create another hybrid called CBD Rene, the first in their CBD line of cannabis.

It traces its origin to a couple of strains. The first one is an unknown cannabis plant from the Himalayan region. There is not a lot of them around and some of which are Kashmiri and Annapurna. Nonetheless, the one specifically used by the breeder is most likely something else.

H.O.T.G.G. then crossed the Himalayan strain with one of the most important hybrids in the history of cannabis, Skunk No. 1. This strain first came around some four decades ago. Its genetics came from different strains worldwide and took many generations before it being released. Since then, it is not only one of the all-time classic cannabis hybrid but has also been used to breed others. There are not a lot of prominent family of strains, but Skunk is one of them.

Like many predominantly Sativa strains with high THC, Rene delivers a euphoric mental high soon after the first toke. Immediately, the mind clears, and an overwhelming uplifting feeling manifests itself. The intense psychoactive trait of the strain now induces cheerfulness. At a social gathering, users of Rene are likely to become much more sociable. In fact, they often also becoming very talkative.

Even with the buzzing head high, there is no mental confusion. Although many people also are not able to hold on to their thoughts. With the creativity unlocked, ideas keep coming popping in, but then it also pops out. Some people refer to it as a speedy high where the mind is racing.

Gradually, the much smaller Indica side of Rene starts creeping down to the body. A warm buzz puts the users in a blissful state. Feeling relaxed but not the kind to make one feel lazy, it serves as an anchor so that the mental buzz does not become overwhelming.

Still, some people may end up using too much. In this case, it leads to a spacey kind of high. If not for its Indica traits, the chances are high that it could lead to a psychedelic experience. Not that it is a bad thing, though, as many recreational users find thrilling adventures more suitable to them.

Rene has a surprisingly pleasant floral hint amidst its earthy smell. It does not take long for its aroma to fill the air in the room once that jar is opened. Break the buds, and a sweet note becomes more distinct that makes its scent so much more enticing.

While many strains taste exactly how they smell, the same cannot be said of Rene. It does have that sweet note that makes it a delight, but the blend of lemon and pine is what makes it divine. There are a lot of strains that come with a great scent and taste. For instance, Blueberry is arguably the best tasting strain ever. Rene, for many of its users, comes close. Not that it tastes the same, but rather, it is that good.

There are no surprises with using Rene. Everything that comes with the use of cannabis is present. For the uninitiated, using marijuana often causes dry mouth and eyes. Other than that, it depends on how much was used.

Overindulgence can cause some people to feel anxious or paranoid. Some may also feel dizzy. So, as a rule, always use within limits. The more herbs users use, then the more pronounced these adverse effects become.

As mentioned earlier, Rene does not come with much of CBD. Hence, many of its medical benefits are psychological and behavioral. For instance, it is one of the few strains that delivers an overwhelmingly good feeling. With that, the word stress is taken off the vocabulary of its users.

One of the issues that many governments have with cannabis is the psychoactive properties. Yet, these are the same characteristics that affect the behavior of people. Besides uplifting the mood, it also induces happiness. When that happens, it is now easier for people with depression to manage their negative feelings. Not only them, but it includes people suffering from other mental conditions including PTSD, for example. As a mood-enhancer, Rene is unparalleled.

People who opt to cultivate their own stock of Rene can do so out in the garden or inside the house. Either way, there should not be much of a difference. A little experience in cultivating plants may come in handy though.

Because it is a mostly Sativa plant, the flowering time of Rene is likely to be between 8 to 10 weeks. Each square meter will produce up to 14 ounces of buds.

Grown in a warm climate, each plant can produce at least 14 ounces. Flowering time likely occurs in the third to fourth week of October.

Have you ever smoked or grown your own Rene? Please let me know what you think about this marijuana strain in the comments below.