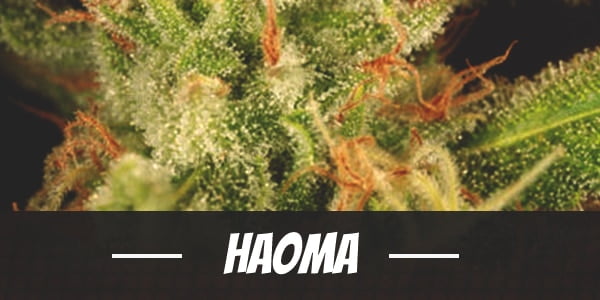 In the last few decades, there has been an explosion of new strains in the market. Even if many of these hybrids were one-time offerings, those that have remained are still a lot. Conventional wisdom dictates that new strains have recreational users in mind. But some breeders do focus on ones that offer excellent values for medical users. One example is Haoma, an Indica-dominant hybrid bred by the House of the Great Gardener (H.O.T.G.G.).

One of the things they do is to develop new hybrids. As mentioned, they aim to breed new species that gives the most medical benefits. To do that, they work with compassion clubs (or cooperatives) in providing for the needs of patients.

In so far as breeding Haoma, one of the strains they used is a landrace Afghani Indica. This same cannabis has also been used in creating many of their other hybrids. It has since been renamed as GG 1. Some of the most notable traits of this pure Indica is its high potency and yield.

Another strain they used is Mendocino Purps (also called Mendo Purps or The Purps). Quite simply, it is one of the best hybrids that delivers a perfect blend of mental and physical effects. It was also included in the High Times Top Ten Cannabis of the Year in 2007.

Using a male GG 1 to pollinate a Purps female, H.O.T.G.G. successfully bred Haoma, a strain with a miniature but dense purple-colored buds. Like its predecessors, Haomo also gained prominence by winning or placing high in numerous competitions. Among its most notable traits is a much higher than average CBD. Even as it delivers a satisfying experience to recreational users, it also provides relief and comfort to patients.

Haoma is not the right strain for people who love intense or even narcotic-like effects. To be clear, it was bred with medical cannabis users in mind. Still, that does not mean it has no value to recreational users. In fact, it should appeal to people who want a gentle high.

Initially, it begins with an uplifting sensation that gently uplifts the spirit. Its physical effects are also felt as a mild buzz creeps into the body. As users start to feel relaxed, a sense of happiness fills the heart and the mind. In other words, most people tend to feel cheerful and possibly, even more sociable. Later, Haoma leaves users in a state of bliss without the heavy sedation associated with many other strains.

With only 10% to 12% THC, its potency is considered as above average. Hence, it means that while it may not result in psychedelic effects, it can still be overwhelming when used in large quantities. In this case, the sedating effects may lead to a couch-lock.

Feeling relaxed and worry-free, most of the users also tend to fall asleep before the effects of the strain are out of the body.

Haoma has proven to be a delight not only in its effects and value to users. It also comes with a pleasant odor. It boasts of a sweet and fruity note with citrusy scent accompanies the smell of damp earth that most people should find pleasing.

Some of its pleasant aroma carries over to its flavors. Upon using, the distinct taste of herbal tea mixed with the fruity taste of berry should prove to be as delightful as its scent.

One of the best things about Haoma is that it does not cause many adverse effects. However, it still can induce dry mouth and eyes as it is still a cannabis. Other than that, there are no other reported negative reactions.

With that being said, users should also exercise good judgment. Simply because it does not seem to cause other reactions such as anxiety, paranoia, headaches, or dizziness, it does not mean that any of these will never occur.

One thing that makes Haoma an outstanding strain for medical use is its 3% to 6% CBD level. Compared to others, most do not even come close to 0.1%. It means that illnesses that CBD can help with including tremors, epilepsy, and seizure can benefit from the use of this strain.

Apart from the possible use as a treatment, Haoma also gives comfort to people undergoing severe stress. Mostly, it is because of the mild mental high and the relaxing properties of its Indica side that helps people stay positive and uplifted. To a lesser degree, it may also act as a pain-reliever for mild cases of pains and aches, as well as help people deal with muscle spasms.

During the comedown, most people tend to fall asleep. People with trouble sleeping and those who need to rest should find Haoma beneficial as well.

Fortunately, H.O.T.G.G. has already stabilized the plant and its seeds. Hence, it is not possible for people to purchase the seeds and grow it on their own. Indoors or outdoors, this hybrid will have no problem growing.

It takes as early as 7 weeks for the plant to be ready for flowering. After that, once ready, then growers can expect 10 ounces of buds or more per square meter.

Flowering time typically occurs in the last week of September to the early days of October. Haoma does not grow tall and loves the warm climate. Under the right conditions, it is likely to produce more than 14 ounces per plant.

Have you ever smoked or grown your own Haoma? Please let me know what you think about this marijuana strain in the comments below.