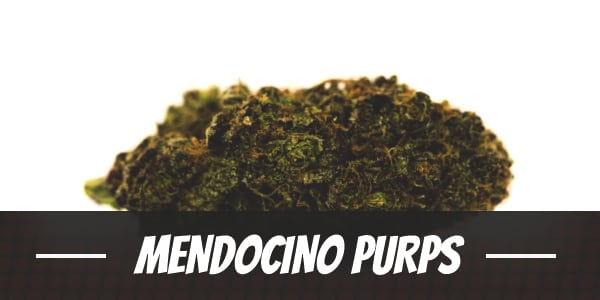 In the northern coast of California, there is a county with a population of some 90,000 people. Perhaps one distinction between this county and the others is how they are highly supportive of the cannabis industry and its use. Besides the beautiful Pacific coastline and its forest, Mendocino county is also known for the cannabis cultivated there. In fact, there is an ongoing assumption that up to a third of the local economy is dependent on cannabis.

Hence, there is no surprise to see a strain named after the county. Here is another interesting fact, the highly-acclaimed Mendocino Purps traces its origin from that country.

Being Indica-dominant, Mendocino Purps rushes in a cerebral head high and balances out as its Indica properties creep into the body. It has also received accolades from the High Times Cannabis Cup, but one that stands out is being named one of the all-time top 10 Canadian strains in the High Times Field Guide to Cannabis Strains.

As mentioned, Mendocino Purps originated from the county it was named after. We know that it traces its lineage to a North American Indica. Unfortunately, we are not privy to where it took its Sativa side. A question that pops into mind is why it would be named as one of the all-time best Canadian strain if it came from California, but that is not worth the hassle of thinking too much over.

It used to be a clone-only strain, but after a couple of years in culturing, BC Bud Depot finally released the seed version.

Mendocino Purps is also known by other names. Among them are Mendo Purps and The Purps.

First of all, this is a powerful strain. Because of that, Mendocino Purps should only be used on a lazy day, or in the evening when there is pretty much nothing else to do. Also, inexperienced and beginners should know that its dominant Indica side is likely to hit hard and keep them on a couch. In fact, some experienced users even recommend having some food on the side, because once you start feeling hungry (as a result of using this cannabis), the couch-lock effect may be stronger than the desire to stand up and get some food.

At the onset, as the high starts to kick in both mentally and physically, you might feel a heightened focus. But soon enough, the sedative properties of Mendocino Purps starts to take over your body. The absolute body relaxation becomes a catalyst for you to relax and let go of tensions building up, which makes you feel happy and perhaps even euphoric.

But as the effects of this strain subside, besides feeling hungry, you are also going to feel sleepy, which makes it ideal for use in the evening.

We think you will love the odor of Mendocino Purps. It has a smell that reminds you of smelling the coffee in a farmland or garden with its earthy smell and notes of caramel and coffee.

While it has a pleasant odor, it has a refreshing taste. You do know how coffee with berry tastes, right? What makes Mendocino Purps is the nutty taste that comes with the blend of berry and coffee that is sure to delight you.

One reaction you can expect is that Mendocino Purps causes you to have dry mouth. There are other reactions which might include dry eyes, dizziness, headache, or elevated level of anxiousness, but they are mostly associated with overusing this cannabis strain.

The one thing you must always keep in mind is to never underestimate the potency of cannabis, and at the same time, never overestimate your tolerance level.

The strong sedative properties of Mendocino Purps calms your body down and induces your mind to let go of the negative thoughts, which makes for a happier version of yourself. Besides helping medical cannabis users lessen their anxiety level, it also has anti-inflammatory properties, as well as being able to provide relief from chronic pains and ache.

As mentioned, when its effects subside, this strain might stimulate your appetite, and because you are so relaxed, induces drowsiness and make you fall asleep. Both are also good benefits for those suffering from poor appetite, as well as having trouble sleeping.

Mendocino Purps grows well outdoor in a temperate climate. It could grow up to as tall as 7 feet with dark green buds that turn a little purplish during the flowering stage. It also grows well indoor and is adaptable to the Sea of Green (SOG) method.

There is some work needed to maximize its yields such as trimming and stress training. The stems of Mendocino Purps may also require ample support so that it does not break from the weight of the leaves and the buds.

TIP: Buy seeds like Mendocino Purps at our seed bank

Mendocino Purps appear to produce a better yield indoor compared to outdoor. By the time that you harvest in 8 to 9 weeks, it gives you around 12 to 16 ounces per square meter.

This cannabis plant is not known to be a high yielder. Mostly, it is dependent on the climate and the expertise of the grower, but during the mid to late part of October during harvest, it might have a yield of as low as 3 ounces per plant, but it should be more than that as some have successfully harvested 21 ounces.

Have you ever smoked or grown your own Mendocino Purps? Please let me know what you think about this marijuana strain in the comments below.