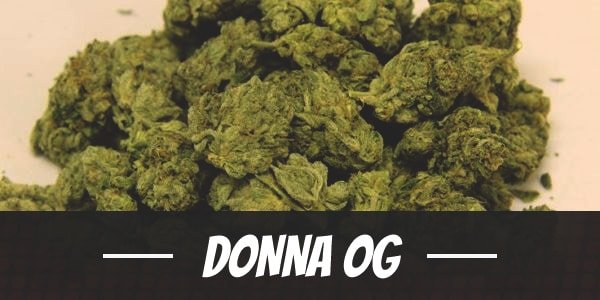 Donna OG is an elusive strain with limited availability. For those who were fortunate to have tried it, most swear it is the best they have ever had. It should not come as a surprise since it traces its lineage to the OG family that has dominated the West Coast scene of USA.

As everyone knows, OG Kush has been around for a while. Breeders in California and even in other parts of the world have used to create others. As its line grew, many of its descendants became prominent as well. Among these are Mary OG (also called Mary Jane) and Larry OG.

Mary OG is a potent Indica-dominant strain that not only delivers full-bodied relaxation. It also induces an uplifting high. However, most of its users tend to fall asleep as its sedating effects take over.

Larry OG, on the other hand, is a cross between OG Kush and SFV OG. Interestingly, SFV OG itself is a phenotype of OG Kush. Unlike Mary OG, this strain is gentler. It delivers a soothing relaxation without hindering people from doing their tasks.

To create the new hybrid, its breeder Vector Beans (under Cannagen Consulting) first crossed Mary OG and Larry OG. After, the offspring was then backcrossed with a phenotype of Mary OG. Apparently, incense is pretty much the norm in the world of plants.

Nonetheless, the resulting Donna OG retains the best traits of its OG lineage and promises to be quite an experience when used.

After hearing about people raving about Donna OG, it is reasonable to have a certain level of expectation. It has an above average potency, which means users must make sure not to exceed personal tolerance limits.

Although it is a perfect split, the Sativa side of the strain is more evident in the beginning. It starts with a euphoric cerebral high that induces an overall sense of happiness. For many, they soon find themselves with a clear head as well as being more creative. As such, it becomes easier to form ideas especially when another effect of the strain is to sharpen focus.

At this point, users can continue to do their tasks without any trouble at all. Meanwhile, they also start to feel a warm buzz creeping down to the body. As the muscles loosen and tensions leave, full body relaxation now sets in.

The combined effects of the strain can intensify as such that it feels like ebbing. Such is the case when people overuse it. Although it is not likely going to reach a point where psychedelic effects occur, the Indica properties can induce a couch-lock. In a sense, the deep relaxation induced by the strain is very much like floating on the surface of the sea and swaying gently with the gentle waves.

Donna OG comes with a lemony and citrusy scent with a note of fuel. In some ways, it reminds people of Pinesol, the famous household cleaner.

The same scent it emits is also evident in its flavors. Adding to it is a mild skunky note contrasted by lime. Donna OG is one strain where its taste can grow on people. Some actually started off not impressed, but in due time, learned to appreciate it.

One of the nice things about Donna OG is that it does not have adverse effects that users should be concerned with. Sure, like all other cannabis strains, it can cause dry mouth and eyes. Other than that, about the only additional possible side effect is mild dizziness.

These conditions do not pose any health hazard. If they do occur, they are temporary. A good way to avoid or minimize these inconveniences is to use the strain within limits.

Donna OG is a very potent strain. It is also unforgiving but not to the users. Instead, she unleashes her wrath against the burden in mind and the heart of users. In other words, this strain is very effective in eliminating stress. With that, it helps people with depression manage their emotion.

But using this strain also presents a dilemma. Users often feel very hungry even before the effects of the hybrid completely fades away. However, most people also tend to fall asleep. Hence, there is a battle of will here where users will have to decide to eat or visit dreamland. Either way, the strain can be useful to insomniacs and those with poor appetite.

Donna OG, unfortunately, is not available in seed form. It is also impossible to obtain a clipping for cloning. Currently, most people are able to get their hands on it by purchasing it in concentrates. Occasionally, its flowers may make its way to the market, but that is rare. Most likely, it is the type of cannabis plant that thrives equally well indoors or outdoors.

Most plants that resemble the structure of Donna OG is likely to have a flowering time of 8 to 9 weeks. The estimated yield per square meter is likely to be around 10 to 14 ounces.

Flowering time should occur between September and October with each plant producing 14 ounces of buds or more.

Have you ever smoked or grown your own Donna OG? Please let me know what you think about this marijuana strain in the comments below.