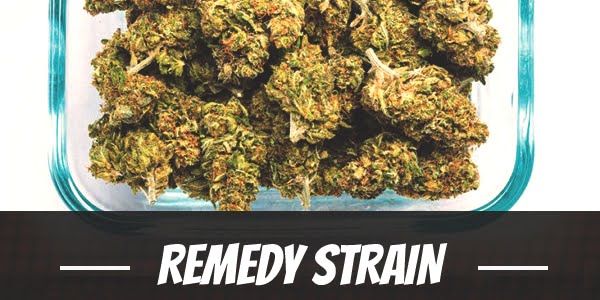 Complicating the legalization of marijuana is its THC content. Of course, that goes without saying that it has had a bad rap for many decades already. Because cannabis does have medical uses, some breeders have created hybrids specifically for such purposes. One of them is aptly named as Remedy. It is also called by its other name, Z7.

Remedy comes with almost no THC content. It means that it does not have any psychoactive traits. It is unlikely to overwhelm users and induce psychedelic effects.

Before recreational users dismiss this strain, though, it is also good to know that it does have some of the same effects that many people find pleasing to use. For people seeking strains that do not have the mind-bending buzz or extreme high, Remedy could be the one. Its effects are gentle and not only does it induce deep relaxation, but it also has a subtle mental high too.

Remedy traces its lineage to two prominent families of strains and one that has made its mark in the medical cannabis industry.

As many cannabis connoisseurs are aware of, both the Afghani and Skunk lines are among the most illustrious in the world. Both have been used by breeders to create many premium cannabis hybrids. A descendant of these two strains is the Afghan Skunk. It has been around for a long time and is a classic in the Amsterdam cannabis scene.

The high CBD content of Remedy has to have come from somewhere. Hence, this is where CannaTonic played a significant role as it is one of the strains with the highest CBD level. Although considered as low, its THC content is still higher than Remedy at 6% or so.

A misconception about strains that possess almost no THC is that it does not have any ‘high.’ Actually, hybrids such as Remedy still do, but it is usually mild. An excellent way to describe its effects is:

“Getting high without the psychoactive effects.”

Such is the experience induced by this strain to users. At its onset, a gentle buzz induces a euphoric sensation that uplifts the mood. Feeling lightened, or rather, unburdened, it is only natural that a sense of happiness sets in. For many people, Remedy can also help clear and purge the mind of ill-thoughts. Instead of troubles, a new sense of hope and motivation becomes more apparent.

It is soon followed by a warm buzz ebbing down to the body. As the Indica traits take over, it does not cause people to have hazy thoughts or result in mental confusion. Instead, a deep sense of relaxation puts users at ease without the numbing effects of others.

Feeling completely relaxed, most people also tend to drift off to sleep.

Holding the bud, users can sniff the fresh earthy scent with a floral tone that is reminiscent of being in a garden with flowers all around. Adding to its fragrance is the scent of pine and a hint of lemon.

The same fragrance of Remedy carries over to its taste with a fruity note of berry. Its smoke is smooth and easy on the throat and the lungs.

It does not often occur especially when users keep the dosage of herbs to a minimum. However, some adverse effects may become more pronounced depending on tolerance level and consumption. Being cannabis, users can expect these reactions to include dry mouth and eyes.

Some people may also feel a little bit dizzy while others have a mild headache.

At up to 18% CBD, Remedy does not only offer comfort, but it can also be used as a treatment.

Many diseases respond to CBD such as epilepsy and seizure. Patients with these chronic illnesses can benefit from cannabis that has at least 8%. Hence, the 18% CBD content of Remedy makes it potent for that purpose.

Another big benefit of using Remedy is in pain relief. Many of the illnesses cause patients to suffer and endure constant pain. Using this strain can result in a few hours of relief and comfort.

The other possible medical benefits of the strain are mostly as a result of the ‘high’ that it delivers. For instance, the uplifting and euphoric sensation can help people manage stress. Furthermore, it can also help users deal with their emotions; this is of significant benefit to people with depression and other mental disorders.

As most people tend to fall asleep, it can also be used to relax after a tiring day and then getting the much-needed quality sleep. Insomniacs, in particular, should find this strain more than interesting.

Unfortunately, there are no seeds of Remedy available. The only way to cultivate it is to obtain a clipping for cloning. If so, then growers will have a choice of planting it indoors or outdoors.

Growers who opt to cultivate Remedy inside the house can trigger the flowering time in as early as seven weeks. However, it may be best to wait for at least another week. Each square meter of the plant can potentially produce anywhere from 10 to 14 ounces of buds.

Outside the house, a warm climate is a suitable environment for this plant. Its flowering period should occur towards the last days of September. Once ready, each plant can produce at least 14 ounces of buds or more.

What is the Remedy strain yield?

How much THC does Remedy have?

What are the origins of the Remedy strain?

Remedy was created from a mix between Afghani skunk and Cannatonic.

Have you ever smoked or grown your own Remedy? Please let me know what you think about this marijuana strain in the comments below.