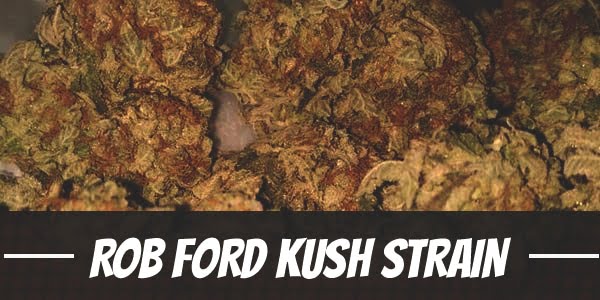 Rob Ford is among the most controversial politicians in the history of Canada. Among international peers, the man is notorious for being ‘Toronto’s crack-smoking mayor.’ Not only that, his mouth runs quick when it comes to slashing and burning his opponents and critics.

However, the strain named after him has the complete opposite effect. Rather than intimidating, the strain induces a relaxing soporific high along with a subtle cerebral buzz. Still, it retains the distinctly strong characteristics of the mayor through its easily distinguishable flavors.

Through its 15% THC, Rob Ford Kush provides various patients with a reprieve against health issues that plague one’s life. And, though classified as a veteran’s treat, beginners may still enjoy it as an introductory strain to more potent buds.

A slow-starter, Rob Ford Kush likes to take its time in inducing its effects. Usually, its initial onset starts within 15 minutes after the first two to three puffs. Swarming the mind is a rush of euphoria that clears away negativity. Replacing it is an innate sense of happiness that radiates outward as users smile for no apparent reason.

Though subtle, the mental stimulation can be quite hunger-inducing. After all, using the mind does exert a lot of energy that will have to be replenished sooner or later. And, what better way than to indulge in a few food favorites? Although, it would be best for users to prepare the snacks ahead of time before taking a hit or the body high takes over.

Complete and utter relaxation blankets users who indulge in Rob Ford Kush’s soothing body buzz. It unties knots in the muscles beginning from the temples until it works its way down. The urge to recline at this point of the session is high but there are others who prefer doing otherwise as the deeply tranquilizing effects can be quite arousing.

A great bedtime companion, Rob Ford Kush can mold partners into one as each gain confidence from being freed of inhibition.

Rob Ford Kush has a distinct pungent fragrance. It is fruity with hints of ripe lemon accentuated by sandalwood. As the buds are crushed and combusted, the smell of noticeably sweet honey mixed in with hash fills the room.

Once drawn in, the sweet flavor of honeyed lemonade enters the palate. Enhancing it are herbal overtones of hash with a tinge of lemon which, on the exhale, lingers for minutes after the last puff.

Adverse reactions are part and parcel with cannabis use. Fortunately, this herb is a friendly one that seldom causes negative reactions outside of the typical dryness in either the eyes or the mouth. This is mostly due to cannabinoids that interfere with moisture production in the tear duct and salivary glands. On the bright side, easing the ache is easily done through downing a few glasses of water throughout the day. Alcohol tends to exacerbate the dryness though and, as such, one will have to refraining from consuming the drink.

It comes as no surprise that Rob Ford Kush has therapeutic value. After all, it contains cannabinoids that appease various health conditions beginning from the temples. Among its best uses, in fact, is relieving stress.

Through its calming euphoria, Rob Ford Kush provides a temporary break from the fast-paced anxiety or overwhelming dread one experiences with work. For this reason, too, it is a great anti-depressant that helps manage symptoms of various health issues like PTSD.

A natural painkiller, Rob Ford Kush eases away various aches in the body. Meanwhile, its anti-inflammatory properties reduce redness and pain in swollen areas. Its soothing buzz also helps appease stomach cramps that can sometimes interfere with one’s appetite. As such, it is not uncommon for one to crave for food.

As an Indica-dominant strain, Rob Ford Kush inherits a sturdy and compact structure. Against strong gusts of wind, it will not falter or break apart even without additional support through staking. The plant can also be cultivated indoors or out due to its highly adaptable nature.

It may need to be thinned out though. Because of its thick foliage, the plant can sometimes harbor moisture within its crevices. If left unaired, can develop into mold or mildew. As such, pruning and trimming are necessary. Not only will it help increase airflow around the lower nodes, but also evenly circulate lighting. At the same time, cutting away dead parts such as branches or leaves will ensure nutrients are distributed makes its way to healthier parts of the plant.

In controlled environments, proper ventilation is a must to prevent the buds or roots from rotting. Applying the Sea of Green method will help increase yields especially when it is paired with a hydroponics system, which hastens the growing process. However, an organic medium like soil will further develop Rob Ford Kush’s terpene profile.

During the flowering period, Rob Ford Kush produces dense buds that are just as compact as its plant structure. There is a barely noticeable but present weight when the popcorn-shaped buds are placed in the palm of one’s hand.

It takes around 7 to 9 weeks for Rob Ford Kush to fully flower indoors. Once ready for harvest, it yields between 10 to 12 ounces of dry product.

It is possible for backyard growers to harvest 12 ounces or more per plant after Rob Ford Kush flowers from the last week of September to the middle of October.

Have you ever smoked or grown your own Rob Ford Kush? Please let me know what you think about this marijuana strain in the comments below.