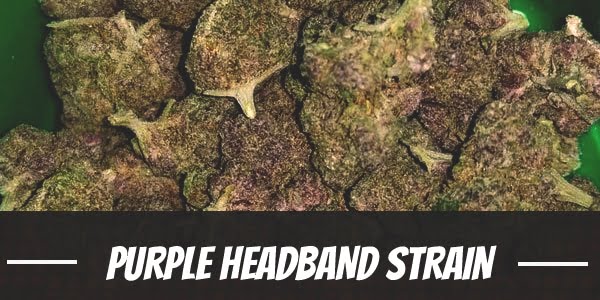 The indica leaning Purple Headband, like its predecessor, uplifts the tired soul from its lethargy through its head-to-toe psychedelic effects. However, rather than greeting the nose with a chemical overtone, it tantalizes the senses with its grape and berry aroma and fruity smoke.

It is difficult to find fault in a strain like Headband. Apart from being potent, it has a creamy smoke that is well-loved by various enthusiasts as it does not induce fits of cough. Its effects start with an energizing buzz that invigorates the body and rekindles one’s zest for life without a heaviness that plants itself on the limbs.

Though its smoke is smooth, many shy away from the bud due to its strong diesel overtones which can be too sharp for the nasal senses. To enhance its overall terpene profile, a group of breeders decided to cross it with an unknown purple strain.

Purple Headband brings out the best of both worlds. It has the long-lasting high of an Indica paired with the quick-acting onset of a Sativa. In fact, in just a few minutes after the first few puffs, it delivers a rush of euphoria to the mind that inspires an upbeat mood.

The behavioral change is immediately noticeable. Users smile from ear to ear as its effect clear away feelings of negativity and thoughts of inadequacy. Moreover, it brings back focus on to the present so one can live and enjoy the moment.

It is not uncommon for a bout of giggles to escape one’s lips or for users to feel overly confident. The persistent head high inspires an innate sense of happiness to build from within which gradually tapers into a soothing relaxation at the comedown.

Because of its perfectly balanced effects, Purple Headband can be used anytime during the day. However, it may be in one’s best interest to know it can be sometimes overwhelming for certain patients.

Purple Headband has a fruity terpene profile that is reminiscent of berries and grapes. There is a hint of gasoline as the buds are broken apart. Crushed and combusted, the chemical scent is replaced by a sweet but refreshing pine.

Purple Headband’s smoke boasts the sweet taste of ripe fruit. In the palate, it has strong overtones of berries and undertones of grapes accentuated by the subtle taste of gasoline. On the exhale, a refreshing pine replaces the chemical flavors.

Dryness in the eyes and the mouth are two common reactions to smoking marijuana. It usually is the result of cannabinoids interfering with the body’s natural ability to produce and retain moisture. Thankfully, the effects are mild and barely noticeable. However, if symptoms persist, users may need to drown a few glasses of water as well as avoid alcoholic or caffeinated drinks throughout the day.

In high doses, Purple Headband can turn an otherwise pleasant high into an overwhelming experience. Characterizing it is a temporary dizziness and a feeling of paranoia that is triggered by heightened sensitivities during its stimulating onset. At times, a headache accompanies the symptoms of greening out. Apart from managing consumption, users may also avoid the uncomfortable effects by staying still and limiting doses.

Presumably, Purple Headband is a recreational strain. After all, that has been the assumption, whether rightly or wrongly, of cannabis for the longest time. Still, the perfectly balanced strain remains to be of significant therapeutic to patients dealing with various ailments.

In inducing its happy high, it calms dread and overwhelming feelings of hopelessness as an effective stress reliever. It boosts the mood and stabilizes turbulent emotions. Because of this, it is a source of comfort to patients dealing with mental health issues like depression, PTSD, and anxiety.

The same psychoactive compound also turns into a natural painkiller in high concentrations. It manifests as a soothing buzz that relaxes the body through and through as it surges through the muscles. In doing so, it relieves aches and pains beginning from the temples.

Drowsiness eventually sets in as users experience freedom from mental and physical inhibition. The eyes droop with a heaviness that is impossible to ignore. Through its sedating properties, Purple Headband improves the quality and quantity of sleep, so one wakes the next day feeling thoroughly reinvigorated.

Purple Headband is a sturdy strain with thick branches that do not break off easily from the weight of its buds. It rarely requires support too, even when fazed by a strong breeze. If anything, the gust of wind will only strengthen its already hardy structure.

With that said, the best place to grow the plant is in a garden or farm where it can flourish without being limited by the four walls of an indoor growing space. It will need a temporary enclosing during harsh weather that might stunt its growth or kill it off completely. It is also for the same reason that certain growers prefer cultivating the strain indoors.

Inside a controlled environment, one can easily adjust factors like lighting, humidity, and temperature to suit the plant’s needs. It may need to be pruned often though. Its compactness can inhibit light circulation and airflow in the lower nodes. Removing certain parts will also improve nutrient distribution to healthier budding sites.

Growers can also choose between two different setups. The Screen of Green will help control Purple Headband’s height as well as create more budding sites. Meanwhile, the Sea of Green forces shortens the vegetative period and forces the plant to flower earlier. Regardless, both will increase yields at harvest time.

Once mature, it produces dense popcorn-shaped buds with a tint of yellow from its golden pistils. When exposed to colder weather, the buds turn a beautiful shade of royal purple. Each emits a sweet fruity scent reminiscent of grapes.

Purple Headband has an indoor flowering period of 8 to 10 weeks. Once ready for harvest, it produces at least 12 to 14 ounces of buds per square meter. Applying either the Sea or Screen of Green method, however, can significantly increase yields.

In the northern hemisphere, Purple Headband flowers from the second to the fourth week of October. Growers can expect at least 12 ounces of buds per plant during harvest time.

What is the Purple Headband strain yield?

Purple Headband yields 12 to 14 ounces per square meter indoors and 14 ounces or more per plant outdoors.

How much THC does Purple Headband have?

What are the origins of the Purple Headband strain?

Purple Headband was created from a mix between Headband and an unknown purple strain.

Have you ever smoked or grown your own Purple Headband? Please let me know what you think about this marijuana strain in the comments below.