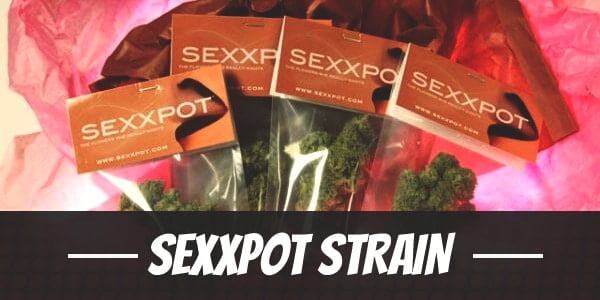 Have you heard of Sexxpot and wondered what it was? This article introduces you to the strain so that you won’t be left out. I’ll explain why it’s so popular, as well as a little bit about how it grows.  Keep reading to learn more.

It’s well known that marijuana can act as an aphrodisiac, but most people focus on its other benefits since not all strains share the same effect.

Still, there is the potential for most strains to work as an aphrodisiac.

That fact is something cannabis entrepreneur Karen Wagner noticed after smoking a joint with her lover before getting down to business.

Karen Wagner’s story is a very relatable one. Many women have a hard time reaching orgasm. This is especially true for those with a lot of worries or insecurities. Through her company, Paradigm Medical Marijuana, Wagner created Sexxpot – a strain dedicated to enhancing the female sexual experience. Its THC levels sit at 14%, just enough to heighten the senses and get rid of inhibition. So, when she introduced her product to a women-only cannabis forum, it turned heads immediately.

Sexxpot is a pure Indica engineered from the genes of Mr. Nice. Like its predecessor, its sweet fruit-flavored smoke paves the way for a stimulating buzz without users feeling overwhelmed. Meanwhile, its moderate levels of THC help soothe many physical discomforts.

Sexxpot is not an ordinary pure Indica.

As alluded to earlier, Sexxpot has an energizing high that is quite uncharacteristic of its Indica structure. But, if anything, the stimulation only serves to intensify the full-bodied experience. Its onset is quick and begins with an uplifting cerebral buzz. When you consume it, you’ll experience an inspiring happiness from within.

It is the perfect euphoric high for an exciting night ahead.

Gradually, a tingling sensation envelops the body.  It eases tension and allows the body to relax. Though intense, users are still free to move around. For men, the soothing yet stimulating buzz is nothing more than another way to cap the day. But, for women, the effects are a little different.

Dubbed as the ‘Female Viagra,’ the natural aphrodisiac takes away societal and physical inhibitions. These mental barriers commonly keep women from being their unapologetic self. To many, the new-found freedom is completely arousing.

This should be no surprise. Karen Wagner did create it for that very purpose.

Sexxpot is often used at night in an intimate setting. However, some like to take advantage of the strain’s great wake-and-bake qualities for enhancing productivity.

As soon as the bag is opened, Sexxpot fills the with the energizing yet pungent scent of ground hazelnut coffee. Broken apart or combusted, a sweet fragrance permeates the air. It is akin to freshly picked peaches, especially as the scent of wet soil lingers.

The flavors are intense as well.

Sexxpot’s fruity blend of peaches and berries bursts onto the palate. The sweetness perfectly complements the undertones of hazelnut and coffee. On the exhale, a skunky aftertaste leaves a lingering impression.

Like other strains, Sexxpot can cause dry eyes and mouth.

This should not be a surprise.

Cannabinoids usually inhibit moisture production regardless of how experienced the user may be. Such symptoms often go away on their own after some time. However, if symptoms persist, a glass of water will do the trick.

Sexxpot also has a unique quirk – it can be very stimulating.

Although paranoia is commonly associated with Sativa strains, proceed with caution with this Indica. Large amounts of Sexxpot can have the same effect as a potent Sativa.

For the best results, pace yourself with this strain and use in moderation.

Besides being a great recreational strain, Sexxpot also has a myriad of medical benefits. After all, the same psychoactive compounds that cause the psychedelic effects also give the strain its pharmacological value.

Its high THC levels don’t just cause an enjoyable high but also relieve pain. Its body buzz soothes the muscles and minimizes the sharp sting of spasms. As it reaches the gastrointestinal tract, it soothes the stomach and stimulates the appetite.

Because of these features, this strain can help patients suffering from chronic pain, anorexia, or cachexia.

The last benefit should be obvious.

Sexxpot is a great stress reliever. Its uplifting sensation temporarily relieves symptoms such as mental and physical fatigue, anxiety, and depression.

Sexxpot is also a great stress reliever. Its uplifting sensation temporarily relieves symptoms such as mental and physical fatigue, anxiety, and depression.

Though you can find these buds online and in local California dispensaries, its seeds are not that easy to find. Its creator, Karyn Wagner, has decided to keep a proprietary hold on Sexxpot. However, with the right connections, growers may still acquire a cut of the strain.

With that said, Sexxpot is a fairly easy grow. Its stalks are sturdy and, because of its manageable height, does not necessitate early topping. Not only that, its cold and mold resistant genes can withstand changes in weather and problems brought about by humidity. It may, however, need constant pruning.

Typical of Indica, the plant’s bushiness can sometimes cause problems with light and air circulation. That’s why you should trim. Trimming also lets the plant to focus its nutrients on growing larger, denser nugs.

Once mature, Sexxpot produces compact, popcorn-shaped buds. Its colors are stunning – mostly green but with obvious streaks of blue and purple that emerge once the plant is exposed to cool temperatures during the flowering stage. Though the bud is covered in sticky resin and frosted trichomes, its thin lavender hairs are still eye-catching.

It takes an average of 7 to 9 weeks for Sexxpot to fully bloom. Once ready for harvest, it produces 10 to 12 ounces of buds per square meter.

Outdoors, Sexxpot flowers by the end of September to the second or third week of October. Each plant can yield more than 12 ounces of buds.

Sexxpot is known for relaxing the body and stimulating the senses, but it isn’t always easy to find. Here are some strains with similar properties that you might want to try:

Sexxpot’s parent, Mr. Nice, is an ideal choice for those that love the strain’s relaxing effects. Its effects are a bit stronger, however, so don’t expect to have much energy for romantic ventures.

If stimulating sex is what you are after, you may want to try Sour Diesel. The sativa – dominant hybrid will put you in a good mood with plenty of energy to spare.

For those needing relaxation combined with a good mood, Girl Scout Cookies is another suitable aphrodisiac. Although it’s relaxing qualities might not motivate you to get too adventurous in bed, the extreme version offered by ILGM, just might.

Have you ever smoked or grown Sexxpot?  Do you know the perfect strain for getting in the mood? Share your tips and comments about this marijuana strain below.