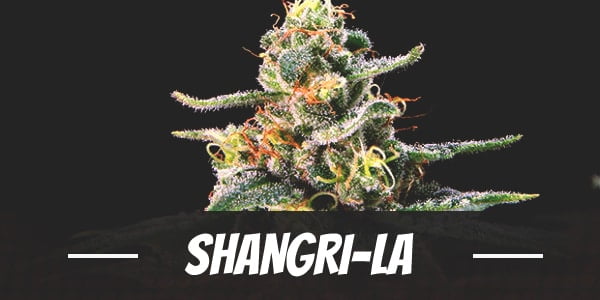 In 1933, British author James Hilton described a place where nature and men live in harmony. It is a place where everything is nothing short of perfection. Indeed, it is as close as one can get to utopia, an idea introduced by Sir Thomas Moore some six centuries ago. This mystical place, James wrote, is in the western end of Kunlun Mountains, China. He called it Shangri-La, a region that has remained a figment of the imagination. Yet, for users of the strain that goes by the same name, the existence of peace and tranquility is as real as it gets.

Fudo Myo-o remains elusive and in fact, not much is known about this strain except that it was named after the Japanese deity that goes by the same name. It is also most likely a predominantly Sativa strain.

9 Pound Hammer, on the other hand, is an Indica-dominant strain that delivers an intense body ‘high’ that has proven not to be only sufficient in inducing a full-body relaxation but also help provide comfort to people suffering from pain.

There are no details on any arrangements between the original breeder and TGA Genetics. But the seed bank appears to be the one propagating and distributing Shangri-La. Unfortunately, it does not seem to be currently available. Although there are a few sites selling its seeds, be careful and exercise due diligence to be sure that it is not fake or other strain being passed on as an original.

There is a reason why the strain is named after the mystical place described by James Hilton in his book Lost Horizon. It brings on a cerebral experience that makes takes users to that state of mind. Although it comes with a very high amount of THC, its effects are intense and yet not overwhelming. Of course, that is on the assumption that people use it well within personal limits.

It begins with an energetic buzz that induces a euphoric mental buzz. It is both electrifying and liberating in the sense that users tend to experience mental clarity. In fact, many users are likely to have a heightened sensitivity with some people feeling a tingling body sensation, especially from the back of the neck ebbing down to the body. With a sharper mind and focus, doing tasks becomes more efficient.

Besides feeling highly motivated, the remarkable mood-enhancing trait of the strain brings on a strong sense of happiness. It is such state of euphoria and bliss that reflects life living in utopia.

Shangri-La, used in moderation, has an intense cerebral ‘high’ but before it starts bringing people over the edge, its Indica traits keep it in check. It does not take too long before it begins to manifest itself as the warm body buzz soon puts people in a full-body relaxation without causing a foggy mind. In the same manner, the Sativa side is potent enough to prevent users from couch-lock.

In a place where nature and men co-exist, the scent of air is a mix of the fields and the forests. An exotic blend of the dank earth with a skunky note together with a hint of citrus sets the stage for what is to come.

Upon inhalation, the skunky is still evident albeit subtle. In contrast, Shangri-La has a strong note of berry with a sweet aftertaste. Overall, its exotic taste is deemed by most of its users as pleasing and easy on the throat.

Because it is not as widespread as other strains, the reports coming in regarding its possible adverse effects are few. Similar to different cannabis strains, it does cause people to have dry mouth and eyes. While we have no reports of other reactions, it does not mean that it cannot produce other conditions.

Any adverse effects may appear especially when one overindulges. Hence, never disregard the fact that packs quite a lot of THC despite its controlled mind and body high.

Being able to induce a euphoric buzz leading users to feel happy, it does an excellent job of eliminating stress. Where one may be undergoing a tremendous amount of pressure, the transformation as a result of altering the mood takes one from troubled land to Shangri-La. Furthermore, it also lets people with mental health issues including depression to focus on productivity instead of wallowing in self-pity.

Combine the uplifting cerebral high with the full-body relaxation it brings to users, it is also able to provide comfort and take away pains and aches. At the very least, it could somehow dampen or lessen these symptoms as a result of chronic illnesses.

There are a few online retailers providing seeds for Shangri-La. However, it is currently not on the website of TGA Genetics. It is, therefore, out of stock or discontinued. Whether the available seeds elsewhere are genuine or not, that is up to the consumers to decide. Once again, there is a need to make sure that these are reputable vendors.

Shangri-La should thrive if cultivated indoors or outdoors. It is not likely to reach more than 8 feet tall as it appears to follow the Indica structure more. In other words, it has more lateral branching. It can also produce an average amount of buds under the hands of expert growers.

It appears that the plant can provide as much as 12 ounces of buds per square meter when planted indoors. It has a flowering time of 8 to 9 weeks.

Each plant will produce at least 12 ounces or more in a warm climate. Flowering time falls between September and October.

Have you ever smoked or grown your own Shangri-La? Please let me know what you think about this marijuana strain in the comments below.