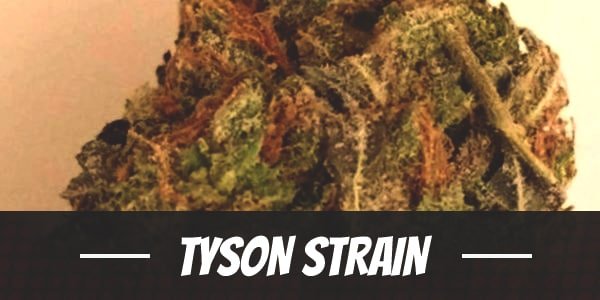 It would be a great injustice for a Mike Tyson tribute strain to not have the same impact as the former athlete. After all, the undisputed boxing champion does have some of the most powerful hits in all of boxing history. As proven, a single hit could potentially knock his opponent out or at least send them flying.

When used excessively, his namesake Indica packs the same debilitating punch. But, when used well within limits? Tyson is the perfect companion for a relaxing night or a lazy afternoon. While its THC levels can reach up to 21%, it is versatile enough to accommodate first-timers.

Sadly, since its introduction in 2011, Canna Clinic never disclosed their flagship strain’s lineage. But, breeder secrecy has worked in the company’s favor. Today, Tyson is a well-loved, irreplaceable strain in both the recreational and medical communities.

Unlike its quick acting namesake, Tyson does not hit users at the first puff. No, it takes its time and creeps in until after its soothing high spreads all over the body. Beginning with a mild rush of euphoria to the mind, it lifts the spirit and inspires a happiness from within.

One of the best times to actually toke the bud is around nighttime, preferably before dinner. The strain’s stimulating compounds ignite the appetite and get one craving for just about anything. As such, it is best to prepare some snacks nearby. This will not only save time, it will also keep users from moving around too much.

With each toke, the mellow Indica buzz intensifies. The once light pressure from the temples spreads all throughout the body. Not all at once, though. Instead, it mimics the rhythmic movement of waves. And, as it slams the limbs, a heaviness sets in and frees the user of mental and physical tension before sending them off to dreamland.

Tyson is a very pungent strain that is best kept in an airtight container. Unless, of course, one does not mind the overtones of diesel with hints of sweet skunk. Broken apart, the buds release an earthy aroma.

Embodying the boxer, Tyson has an equally strong flavor. Drawn in, chemical notes of diesel balanced by the sweetness of berries linger in the palate. On the exhale, the harsh, cough-inducing smoke leaves a spicy aftertaste.

All varieties of marijuana each have their own set of unwanted effects that users should be mindful of. Tyson, for example, tends to inhibit the production of moisture. The result is users with red eyes and a cottonmouth. Normally, the symptoms are mild but drinking water relieves such symptoms of dehydration.

As the psychedelic effects slam the body, it is possible to feel a little dizzy. Although, in the rare occasion one does overindulge in the strain, Tyson can cause users to feel a little paranoid. Meanwhile, those in a state of worry may find their anxiety levels increase.

At 1%, Tyson’s CBD value is higher than most recreational strains. In spite of that, the strain’s pharmacological value remains high among medical users because of its psychoactive compounds and cannabinoids.

As a pure Indica, Tyson’s best use is definitely physical. Its soothing buzz helps manage pain caused by the sharp contractions of muscle spasms. In users with food-deprived bodies, such as those with anorexia or cachexia, it calms the stomach and helps it down meals.

Of course, there is also a possibility that the hearty appetite could also be a side effect of the subtle mental stimulation. Its mood-enhancing effects make it an optimal stress reliever and anti-depressant. Regardless, once the pain has fled and the negativity has subsided, it is time to settle down and go to sleep.

Backed by the excellence of its pure Indica genes, Tyson can withstand most common diseases and grows well regardless of its environment. Adding to its easy grow is its naturally short height.

Besides fitting into most grow areas, such statures play a great role in helping plants reach their fullest potential. Along with growing techniques like the Screen of Green method as well as Low-Stress training, it redirects nutrients to growing hefty buds instead of stretching stalks. Climates consistently testing at 21°C provides optimal conditions too.

At the moment, however, seeds of Tyson are not available anywhere. As a producer of medical cannabis, Canna Clinic has decided to invoke their proprietary rights on all their products. Although, adamant growers can still get ahold of clippings from a mature plant.

Indoor growers should consider installing powerful odor control systems like carbon filters. A potent strain, even just a single Tyson specimen can fill the room with its pungent and skunky aroma. With that said, each square meter produces up to 12 ounces of buds in just 7 to 8 weeks.

Before the start of October, each plant of Tyson yields at least 12 ounces of buds per plant.

What is the Tyson strain yield?

How much THC does Tyson have?

What are the origins of the Tyson strain?

Have you ever smoked or grown your own Tyson? Please let me know what you think about this marijuana strain in the comments below.