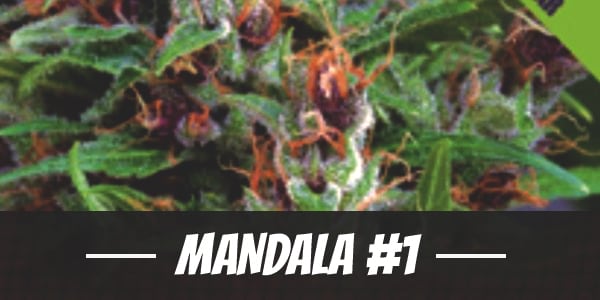 Mandala #1 is among the most coveted strains in the cannabis industry. Not only for its potent levels of THC that average from 18% to 21% but also for its diverse genes. The bud itself traces its roots from four landraces of different origins.

Developing Mandala #1 was not a difficult task. Its breeders Mandala Seeds had a wide array of products to choose from. And what better choice than the indigenous varieties that served as genetic bases for many of the modern strains sold today?

From the energizing Sativas of South Africa and North India, Mandala #1 gained its energizing high and intense cerebral effects. Meanwhile, its tranquilizing body buzz as well as royal hues is an inheritance from New Zealand’s Purple Indica.

Resulting from the three-way cross is a well-balanced hybrid that induces a stimulating, mind-opening, and relaxing psychedelic high. And though its recreational effects are well noted, its pharmacological value is not forgotten. Through the same chemical compounds, the bud provides a reprieve against various health issues.

In only a few minutes after the first two or three puffs, a surge of uplifting energy reinvigorates the body through and through. Beginning with a euphoric rush to the mind, of course. Users smile from ear to ear as a happiness radiates from within.

The upbeat disposition is like a breath of fresh air for casual users stuck in a mental slump. It clears the mind of worries so thoughts flow and form freely into profound ideas. Accompanying the creative spark is a renewed sense of motivation that allows one to delve deep into the developing innovative solutions.

Even after an hour or two, the initial energizing high does not subside. It continues to soothe each muscle so users do not feel tired while working on tasks or chasing projects. For this reason, it is a great daytime treat that boosts productivity through its wake-and-bake qualities.

Mandala #1 has a fruity aroma reminiscent of apples enhanced by berries. Complementing the sweetness is a cooling mint that intensifies once the bud is broken apart. Once combusted, it emits rich earthy smell.

Carrying over to Mandala #1’s flavors is its cooling minty profile. In the palate, it bursts with sweet notes of citrus, berries, and apples. Blending with it are undertones of earth that leave an aftertaste of freshly picked fruit.

It is not uncommon for users to feel a little dehydrated while using Mandala #1 especially around the eyes and the mouth. After all, it has moisture-inhibiting cannabinoids which are typical of marijuana. Neither the cottonmouth nor the dry eyes are irritating though but, if symptoms persist, users may down a few glasses of water to keep hydrated.

Because of its potency, Mandala #1 has the tendency to green out users who overconsume it. The condition is characterized by a temporary dizziness and increased anxiety. Some may even feel a little paranoid. Pacing and moderation, however, will keep such side effects at bay.

Mandala #1 retains its significant therapeutic benefits through the combined effects of its THC, CBD, and cannabinoids such as terpenes. The mood boosting effects of its happy high, for example, temporarily relieves symptoms of depression and similar mental health issues such as PTSD. In a similar manner, it also releases stress.

In high levels, the psychoactive compound also turns into a natural painkiller. It soothes various aches beginning from the temples to the rest of the body. Apart from that, it eases the sharp sting of sudden muscular contractions or cramps.

At the same time, it appeases any turbulence in the stomach so patients with cancer experiencing the nauseating aftereffects of chemotherapy.

Mandala #1 is among the easiest plants to grow in the cannabis industry. Its landrace genetics provide it with a sturdy structure that can withstand various issues such as high levels of moisture or strong gusts of wind of farms and gardens. Moreover, it has high resistance against sudden changes in temperature which are common for indoor plants being transferred outdoors during the flowering period.

Depending on the phenotype, Mandala #1 can have a Sativa structure wherein its stalks stretch at the top or the short, compact stature of an Indica. The former performs best when the Screen of Green is applied while the latter prefers the Sea of Green. Regardless, both variants boast the same leaf structure which are usually larger.

In controlled settings, Mandala #1 does not grow as tall which assures aspiring growers of a plant that will fit most growing spaces. Those with truly limited spaces, however, may need to shorten the vegetative period to stunt its stretching. During the flowering phase, it is best to switch to a 12/12 lighting cycle while exposing the bud to colder temperatures. This will not only encourage even better trichome production but also bring out its stunning hues.

One thing to note about Mandala #1 is that it only comes in regular form. As such, growers need to pre-germination techniques to increase the chances of getting female plants. Although, one may opt for clippings as well.

Mandala #1 has a short flowering period of 7 to 9 weeks. Once mature, growers can harvest an average of 16 ounces of buds per square meter.

Garden grown Mandala #1 usually blossoms from the last week of September to the second or third week of October. A hefty yielder, the well-balanced bud produces 28 to 42 ounces of buds per plant.

Have you ever smoked or grown your own Mandala #1? Please let me know what you think about this marijuana strain in the comments below.