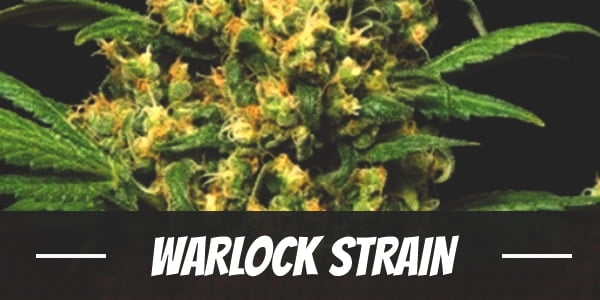 Genie gives whoever sets it free three wishes. In the case of the Warlock, it grants only one and no, its users cannot choose among the benefits it can give. What it does is to induce a complete body relaxation.

To have a strain that can provide the ultimate relaxation, it begins with the choice of the genetics. While there are a lot of pure Indica plants in the world, the Afghani is arguably the best in its class. Besides delivering an intense body high, it is also notable for a mild euphoric rush.

Another strain used is Skunk No. 1. Already, it is considered a legendary hybrid that has been used in creating many other strains. Among its notable traits that are evident in the Warlock is in its ability to wipe out stress.

The breeder, Magus Genetics, did an excellent job of crossing the strains mentioned above. As a result, once the Warlock casts its spell, its users are transported into a worry-free world.

Among its most notable accomplishments is being recognized and placing third in the 1997 High Times Cannabis Cup Bio category.

Witches and warlocks were once persecuted. In fact, the mere suspicion of being one is enough reason for a painful death. Immediately coming to mind, of course, is Salem. Those days are gone, though. Instead, what we have is a strain that users can use to cast a powerful spell in the comforts of the home.

The Warlock, as it turns out, is one potent strain that once cast, delivers an extreme euphoric sensation. Rather than causing one to feel overwhelmed and spacey, what it does is bring clarity of the mind and heightened focus. Although mild compared to other strains, in particular, Sativa-dominant ones, the mental high is still pretty remarkable.

In a sense, the cerebral effects set the tone for what comes next when the full power of the Warlock is felt. Feeling good about themselves, the body high hits hard to redefine the meaning of the word relaxation. As the numbing buzz invades the body, the sedative-like effects bring with it other benefits including ones that are useful for medical cannabis users.

As remarkable as the effects of the Warlock are, maybe its aroma is not its best trait. Not that it is foul, but for some people, the pungent odor with notes of sour cheese and earth will need a little bit of getting used to.

Making up for its aroma, the Warlock does come with an appealing taste. Most people will find the sweet, fruity notes pleasant and agreeable.

The Warlock is not for the faint of heart. It is a very potent strain that beginners may want to avoid using. Nonetheless, the most important thing is to use only a small amount, especially when trying it out for the first time.

One thing that people need to know before its use is that it is known to cause headaches. In that sense, the Warlock is not easy to handle. Other than that, what people can expect to experience is having dry mouth and eyes.

Also, some people may be having mental health issues such as anxiety. Know that using this strain may cause one to feel paranoid.

Adverse reactions, in most cases, are mild. However, once users overuse, these side effects become more pronounced.

A strain that can cause headaches is also one that is sought after for its relief. Sometimes, it is best not to dwell too much on the mysteries of the Warlock.

Combining the cerebral and body effects, users are brought to a new level of relaxation. It then follows that it can squash stress like no others can. At the same time, with its sedative-like properties, it is also useful for pain relief.

Despite its Indica heritage, the Warlock grows quite tall. As such, besides having a pungent odor, it can also be seen from the street if one were to plant it outside the house. At any rate, it thrives well in a warm climate where there is plenty of sunshine.

Growers also have a choice of cultivating the plant inside the house. Because of limited spaces, it will need more work such as trimming and pruning to keep it short. In essence, what one wants to do is to encourage a more outward growth.

Having experience growing marijuana is ideal, but even beginners can successfully grow this plant. After all, one has to start somewhere. At any rate, throughout its growth and especially when it is time to harvest, expect to see elongated buds covered with brown hairs.

Most growers cultivate cannabis indoor for a good reason. While it is costlier, it allows for all-year-round cultivation. Fortunately, the Warlock thrives well in an indoor environment. Growers can trigger the bloom phase after eight weeks. Under 600 watts of light, each square meter can produce 14 to 18 ounces of buds.

If privacy is not an issue, and the local laws allow it, the open space benefits the plant as it can reach its full potential. That goes without saying that growers will have to make sure it is in an ideal environment as well as tend to its needs. At any rate, it starts its flowering stage beginning the second week of October. Each of these plants can produce 18 ounces of buds and possibly more.

What is the Warlock strain yield?

How much THC does Warlock have?

What are the origins of the Warlock strain?

Warlock was created from a mix between Skunk 1 and Afghani.

Have you ever smoked or grown your own Warlock? Please let me know what you think about this marijuana strain in the comments below.