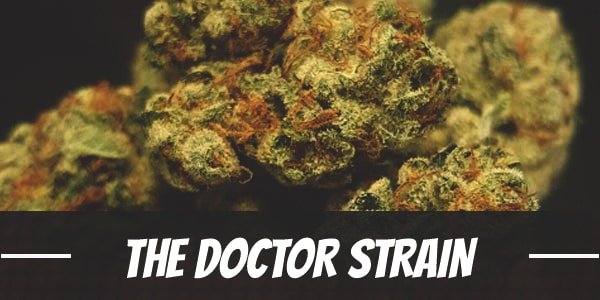 Beyond recreational uses, there are other benefits to using marijuana. In fact, activists contend that it has medicinal uses. For centuries, people have known its benefits yet without official endorsement from the state, its use in the medical community remains anecdotal. Still, that did not stop the campaign for its legalization. As more states and nations warm up to allowing its use, countless people can have access to strains such as The Doctor.

Information about The Doctor:

The Doctor is the result of a three-way cross between three incredible strains – Great White Shark, Super Skunk and South Indian Indica. Each of these plants passed on some of their most notable traits to the offspring.

Great White Shark is sought out for its Indica effects that helps patients with chronic pains. Super Skunk, meanwhile, delivers body relaxation as well as helps reduce stress and suffering. Complementing both Indica-dominant strains is the landrace South Indian Indica. Due to its Indica lineage, The Doctor is a hybrid that one can expect to deliver an intense body buzz. As its name implies, it also makes itself invaluable to the medical cannabis user community.

Here’s a little fun fact about the name.

Greenhouse Seeds, it seems, named the strain after Italian MotoGP champion Valentino Rossi. At some point during his career, The Doctor became his nickname. It is likely because of the respect he has for physicians and the profession. In that sense, that became the inspiration for the breeder in choosing the name of the strain. In other words, they wanted this new hybrid to not only be great for recreational users but also for patients suffering from chronic illnesses.

Information about The Doctor:

Has a doctor ever told anyone who is seriously ill to get up, get out, and exert physically as much as possible?

TIP: Looking to buy The Doctor seeds? Check out this marijuana seed shop

Of course, no reasonable physician would do that, and the strain is not about to deviate from the standard recommendation of resting. The Doctor is a potent strain carrying with it some 17% to 18% of THC. Because it is an 80% Indica strain, one cannot expect it to bring on a buzzing and energetic, mental high.

It works fast too as moments after using it; The Doctor comes rushing in. In the beginning, it comes with an uplifting sensation that changes the mood of users. Most people are likely to feel happy or even euphoric. It is not surprising to see some tending to giggle or laugh more.

Soon enough, it works its way to the body coming in with a numbing buzz that leaves most people on a couch-lock. The intensity of its effects can be described as insanely relaxing. At this point, most users find themselves unwilling to move while seemingly locked in their thoughts. While some people describe the experience as feeling hazy or spacey, most agree that The Doctor leads them into deep introspection.

Evidence of its skunk lineage is evident as its odor is distinct even while it blends in with an earthy scent. Complementing it is the sweet and fruity smell of grape that makes The Doctor pleasant for most people.

While many strains have the same aroma and flavors, that does not seem to be the case with The Doctor. Instead, its fragrance is less pronounced and makes for a delightful treat is the note of citrus and lime.

Medicines come with side effects, and it is a fact that most pharmaceutical companies will hide. Even if they do publish it, try finding it on tablets or read the small fine prints. As for marijuana, everyone knows that its use can also lead to some adverse reactions. For instance, the most common ones are experiencing dry mouth and eyes.

Other than that, there are instances when a few people may feel a little more anxious. Hence, those with anxiety disorders may be better off picking another cannabis strain.

It does not take a long time for The Doctor to come to the rescue of medical cannabis users. Moments after using it, the sedating effects it ushers in can calm the nerves, and the muscles too. Because of the deep relaxation it induces, one thing that it does well is to make people feel sleepy. As such, it proves to be useful to individuals who need to rest including the insomniacs.

TIP: Looking to buy The Doctor seeds? Check out this marijuana seed shop

At the same time, the mild uplifting effects aid the heavy Indica hit in wiping away stress. Users are too relaxed to be bothered by the burdens of the world. Other side-benefits include helping people manage depression or PTSD.

As mentioned, the sedative-like property of The Doctor can also help with pain-relief as well as deal with inflammation.

Indica plants rarely grow to over six feet. Outdoor, The Doctor will thrive in a warm climate, but it also tolerates cool temperature extremely well. Hence, it favors people who live in colder regions.

Grown indoor, growers will have to decide on the medium. Planted on soil, The Doctor will have better flavors. Using hydroponics results in a higher yield. Either way, this marijuana plant is highly adaptable to the Sea of Green training method.

While some experience is useful, many beginners have grown the plant successfully. One thing to note is that it may require support due to its heavy buds.

After eight weeks of tending, The Doctor is ready for the next stage. Growers can begin triggering its bloom phase. Upon harvest, each square meter can produce up to 28 ounces of buds.

Some strains are notable for massive yields such as the Big Bud. It seems that The Doctor does better with a production of up to 42 ounces per plant. It begins the transition on the last days of September.

Have you ever smoked or grown your own The Doctor? Please let me know what you think about this marijuana strain in the comments below.

2 comments on “The Doctor Strain”