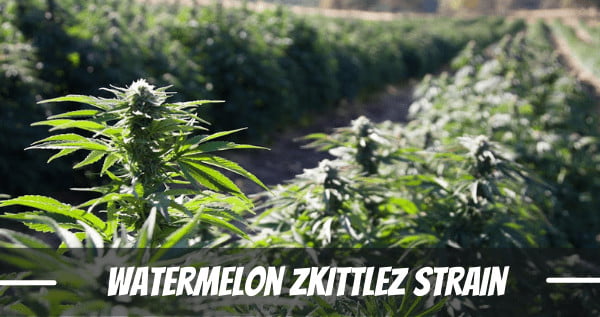 For the grammar police already cringing at this Watermelon Zkittlez strain review, this strain is also known as Watermelon Skittles. But we aren’t going to call it that because it’s not as fun.

Watermelon Zkittlez is a hybrid marijuana strain bred from Watermelon (aka Watermelon Kush) and Zkittlezs’ genetics.

Both parent strains have a somewhat mysterious lineage. Zkittlez is the offspring of Grape Ape, Grapefruit, and an unspecified strain.

However, although the sativa traits of grandparent strain, Grapefruit does come through, especially in its growth patterns.

It has the potency to knock both parent strains off their feet and delivers a chart-topping high.

The lowest THC level was around 15%, but this is not the standard.

If you’re looking for a balanced strain that is as tasty as it is potent, this is the one for you.

If you’re looking to be transported to cloud nine at the snap of a finger, you won’t be disappointed.

Watermelon Zkittlez comes in swiftly and makes its presence known – and you don’t need much to experience the full effects.

The sativa traits come through first. Your mind floods with euphoria until there’s nothing left but bliss.

You will feel happy, uplifted, and carefree, as though you have never experienced a bad day before.

The cerebral calm gives your mind the freedom it seeks, making you more introspective and creative.

Once the high navigates its way from mind to body, the indica genes shine.

A powerful, tingly sensation takes over, offering relief from physical discomfort and fatigue.

You may feel like you can’t stop smiling or become overwhelmed by giggles or more talkative than usual.

Some users experienced heightened arousal as well. This strain is the perfect way to end a long and busy day and will have you baked to perfection.

A swirl of citrus, berry and tropical fruits create a mostly sweet aroma with sour undertones.

When broken apart, the fruitiness comes through first, followed by fresh earth – kind of like standing in the middle of an orchard during harvest time.

The scents are strong and invigorating – perfectly encapsulate the flavors within.

Watermelon Zkittles is a refreshing burst of goodness. Your taste buds immerse in luscious notes of grape, citrus, and, of course, watermelon.

Notes of herb and musky earth come through, especially on the first toke, which hits with a sharp zestiness. Though the initial burn is quite pungent, it offers a smooth and enjoyable flavor.

Though its name may be a little on the nose, Watermelon Zkittlez is not as straightforward as you’d expect.

This is unlike most strains since consumer experiences tend to stay within a particular range.

Some people mentioned experiencing paranoia or concern, while others said this is the only strain that doesn’t cause these feelings.  Some remarked the intensity was overwhelming, especially in the body, and felt more burdensome than relaxing.

One thing consumers agreed on – this is not a good strain for new or low tolerance users.

Even those with experience should consume minimal quantities. The Watermelon Zkittlez strain THC level is high.

So you could find yourself moving from happy and chill to complete stupor with just one more drag.

The Watermelon Zkittlez strain yield is more impressive than most.  Especially at the hands of experienced growers.

That said, the plant is easy to grow regardless of skill level. Even a basic understanding of cultivation will go a long way.

These buds are a beautiful display of moss green with rich purple hues and a splatter of burnt orange pistils.

Crystal trichomes dot the purple cover of the nugs, glistening in the sun. The plant has an otherworldly, glacial appearance.

Perhaps the most exciting Watermelon Zkittlez strain info is that despite being indica-dominant, its growth patterns stem from its sativa roots. That means you can look forward to good yields.

The photoperiod plant can be grown both indoors and outdoors. It isn’t temperamental and doesn’t need heaps of extra attention to flourish.

Download my free marijuana Grow bible so you can grow your own Watermelon Zkittlez strain!

Flowering indoors is roughly 63 days. Outdoor harvests will be ready from the 3rd week of September.

Indoor yields will deliver around 1.8 OZ/FT2 but can reach up to 2.62 OZ/FT2 with a more experienced grower behind the wheel.

The Watermelon Zkittlez strain yield is much greater when grown outdoors, delivering 26-35 OZ/plant.

Is Watermelon Zkittlez an Indica or Sativa?

Watermelon Zkittlez is a hybrid strain, meaning it contains both sativa and indica genetics. This is most noticeable in the effects, which affect both the mind and the body. Through years of crossbreeding, most strains on the market today are hybrids.

Why is it called Watermelon Zkittlez?

Its name comes from the burst of sweet, fruity flavors that immediately remind you of the candy we all love. One toke is all you need to taste the rainbow (and ride it, too).

What are some other fruity indica-dominant strains?

Most fruity strains are sativas, thanks to their higher concentration of terpenes like pinene and limonene, but you do get some indicas that offer those fruity flavors. Strains like Fruity Pebbles, Blueberry, and Grape Ape are all great choices if you’re looking for those fruity tastes with the indica high.