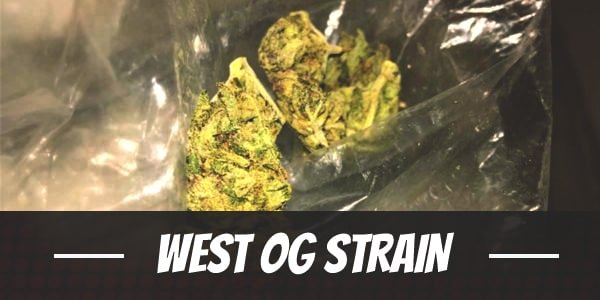 Contrary to popular belief, West OG does not directly descend from OG Kush. However, it is its direct relative as the Indica-dominant hybrid is an offspring of Chemdawg. This is precisely why the bud has overtones of lemon complemented by a sour diesel undertone. Meanwhile, the addition of the Humboldt plant improved upon the Californian genetics of the strain while improving its performance in the grow room.

Unlike both of its predecessors, this strain leans toward the Indica side of the family. Although it has a cerebral centered onset, its later effects complement the pleasant mood elevation with a tranquilizing body buzz. For medical users, this means being successfully rid of symptoms of stress from all over the physique starting from the mind.

The versatile West OG also offers beginners a chance to improve tolerance to THC with its potency of 16% to 22%. Meanwhile, its performance in the grow room provides the same opportunity of improvement to aspiring growers who want to hone skills.

A slow starter, West OG does not like rushing the mind with head-slamming effects. Instead, it eases users into a state of calm euphoria through an uplifting buzz that manifests 15 minutes after the first two or three hits.

As soon as the initial onset begins, nothing but happiness is felt. Downturned frowns turn into upturned smiles that matches one’s bright mood. Radiating from within is an unparalleled bliss that makes the wander in carefree flight. It is not surprising for one to come up with ideas during this time. After all, in spite of its subtlety, it creates a clear path for thoughts to flow and form freely.

Though it seems like a Sativa, the cheerful head high and upbeat mood only serves to prepare users for the upcoming body buzz.

After about an hour or two, the same uplifting buzz trickles down from the temples. Ebbing in waves, it removes tension and tightness from the muscles until one feels fully enveloped in relaxation. Replacing it is heaviness that the Indica-dominant plants in the limbs. Gradually, the eyes become droopy while an urge to recline intensifies. Eventually, users go on a trip with Mr. Sandman into dreamland.

The possibility of being couch-locked while using West OG is absolutely high. As such, one will want to reserve the strain for more laid-back nights.

West OG has an energizing lemon scent that is accentuated by the taste of diesel. Looming undertones of herbs and spices are noticeable as well, especially while breaking apart the buds. And, once combusted, it emits an earthy aroma that fills the room.

Drawn in, a mixture of herbs doused by lemon zest burst in the palate. Enhancing it are subtle notes of earth and wood that make the herbs seem freshly picked. Following the exhale, a diesel-flavored smoke washes over the mouth with a sour aftertaste.

It is not uncommon for users to feel startled once the effects of West OG hit. After all, it is a potent strain with a heavy-hitting high that can be temporarily dizzying. It can sometimes develop into a subtle feeling of paranoia if users smoke the strain outside of limits. Although rare, it is best to start with low dosages while pacing consumption of the strain.

A more typical reaction to marijuana are dry eyes and a cottonmouth, especially when moisture-inhibiting cannabinoids interfere with the production of saliva. Though unavoidable, staying hydrated will help ease the discomfort felt throughout the day as it persists for hours.

Presumably, West OG is a recreational strain. In spite of this, its therapeutic value is not a all diminished. Through the combined effects of its cannabinoids, the Indica-dominant strain provides patients with temporary reprieve from various mental and physical health afflictions.

Its calming yet euphoric onset enhances the mood while stabilizing turbulent emotions. For this reason, it can be used as a stress reliever by users constantly bombarded by the daily stressors of life. Similarly, it also manages symptoms of mental health issues like depression and PTSD along with anxiety.

Apart from the behavioral, the bud also significant physical effects that improve the quality of lives of people living with chronic pain. Among its best uses is relieving intraocular pressure which, if left unattended, can worsen into glaucoma. The same soothing buzz also wraps the body in total relaxation until users fall into a deep, unencumbered slumber.

Although it is a relatively easy plant to grow, West OG poses quite a challenge for beginners. As such, it is the perfect strain to practice on while honing one’s skills. It is short, stocky, and quite sturdy. However, it has two weaknesses – humidity and overfeeding or watering.

Due to its compact structure, the plant undoubtedly harbors moisture in between its crevices. Left on its own, it will attract mold and mildew as well as stunt the buds’ growth. The second issue is a common zealous beginner’s mistake. Plants can suffer from nutrient burn when feeds are not regulated. Meanwhile, over watering it will cause the roots to rot. Learning how to prune is also a necessity as it will help circulate air and light properly.

Apart from those two, the plant thrives well. It can withstand various unpredictable issues such as fluctuating temperatures and sudden changes in weather. Against strong winds, it stands still and will not break off even with the added stress from the heavy weight of its buds. Still, there are many who prefer cultivating the strain indoors for added control and protection against pests.

Inside controllable environments, growers can utilize a hydroponic system and supplement it with the Sea of Green to encourage bud growth as well as hasten the flowering period. Soil, on the other hand, will enhance flavors while super cropping will improve trichome production.

TIP: Buy seeds like West OG at our seed shop

Indoors, West OG has a flowering period of 7 to 9 weeks. Though short, it yields abundantly with each square meter producing between 10 to 12 ounces of buds.

Outdoors, West OG flowers from the last week of September to the middle of October. It produces at least 12 ounces of buds per plant. Under the expert care of a seasoned grower, it can yield more at a quicker rate.

Have you ever smoked or grown your own West OG? Please let me know what you think about this marijuana strain in the comments below.