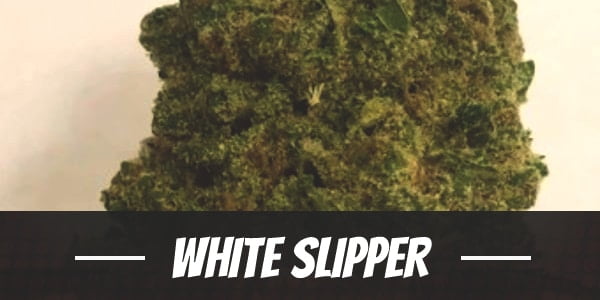 It is difficult to find fault in a strain like The White. It buds, which look white, are heavily covered in trichomes, alluding to its extraordinary THC. When consumed, it brings users to soaring new heights instantaneously. Sadly, many shy away from taking a hit because of its blandness.

Unknown breeders later crossed Glass Slipper with The White. Apart from its pleasant mental effects, the legendary clone-only bud is tropically alluring. From it, White Slipper gained its blueberry undertones.

Apart from its unique terpene profile, White Slipper is also distinguished for its ns high THC levels and powerful head high. Though generally for more experienced users, beginners may still enjoy the strain with a seasoned friend.

White Slipper is not one to waste time. Its predominantly Sativa genetics, coupled with its impressive THC levels of up to 25%, deliver an initial cerebral onset within a few minutes after the first two to three puffs. The psychedelic effects are immediately felt, starting off with a rush of euphoria that swarms even the deepest recesses of the mind.

The behavioral change is visibly noticeable. Smiling from ear to ear, users radiate with a happiness that can only come from within. Some even find themselves giggling for the smallest of reasons. A great recreational strain, White Slipper also encourages an innate sense of confidence so users feel at ease with sharing stories or anecdotes.

After about an hour or two, the same uplifting buzz that caused the cerebral high trickles down from the temples. The light pressure is soothing and calming just like the waves of the ocean. As it eases away tension from the muscles, the body moves freely like a well-oiled machine.

Because of its persistent mental effects, White Slipper is preferably used during the day. In this way, users not only take advantage of its wonderful wake-and-bake strains but also need not feel too energized to sleep at night.

White Slipper has a pungent herbal overtone. Blending with it is the spiciness of pepper which intensifies after one truly gets a whiff of its buds. Broken apart or combusted, an unexpected note of blueberry fills the air.

Carrying over to White Slipper’s flavor profile is its strong notes of herbs as well as a subtle hint of wet soil. Drawn in, its sharp smoke washes over the mouth with the spicy taste of pepper. On the exhale, a blueberry undertone leaves a pleasant aftertaste in the palate.

Dry eyes and a cottonmouth are two of the most common reactions to marijuana. Both are unavoidable but can be easily managed by downing a few glasses of water. Another side effect that users experience is greening out, which is a condition characterized by dizziness and anxiety. Usually, it is brought about by overconsumption but can also be influenced by one’s disposition before the high. In such cases, it is best to not smoke at all.

It is not wrong to believe White Slipper is used mainly for recreation. After all, that has been the people’s perception of marijuana for the longest time. Still, White Slipper remains pharmacologically valuable to many medical users. The combined effects of its THC, CBD, and cannabinoids like terpenes provide a reprieve against certain health conditions.

The happy high its THC content induces, for example, helps enhance the mood. At the same time, it stabilizes turbulent emotions by calming the mind. For this reason, White Slipper is an effective stress-reliever. It also temporarily manages and relieves symptoms of depression, PTSD, and other similar mental disorders.

White Slipper also has positive effects on the body. For one, it relieves various kinds of aches and pains beginning from the temples. It also appeases cramps by keeping the muscles from suddenly contracting.

Though it leans toward Sativa, one can say White Slipper has an Indica plant structure. It grows relatively tall but its stalks, as well as its branches, are thick. Moreover, it has high resistance against strong gusts of wind and problems caused by too much moisture in the air such as mold or mildew. For this reason, it performs well outdoors in spite of its preference for warmer, more semi-humid climates.

Still, there are many growers who prefer cultivating White Slipper indoors. Apart from added protection against, controllable environments allow growers to adjust important factors like temperature, lighting, and humidity. It may sometimes require height management techniques like early topping or cutting short the vegetative phase so it does not outgrow its space.

Hydroponics is great for growers in a hurry as it hastens the flowering period, especially when it is paired with a growing technique like the Screen of Green. However, it is soil that brings out its full flavors.

Once mature, White Slipper’s buds take on a more Sativa shape. It is elongated and stretched out on both sides. Adding to its appeal is its density along with a stunning mixture of olives, golds, and orange hairs.

Indoors, White Slipper flowers around 8 to 10 weeks. Growers can harvest an average of 12 to 16 ounces of buds per square meter once the strain fully matures.

White Slipper blossoms from the last week of September to second or third week of October when cultivated outdoors. Once ready for harvest, it yields at least 16 ounces od buds per plant.

Have you ever smoked or grown your own White Slipper? Please let me know what you think about this marijuana strain in the comments below.