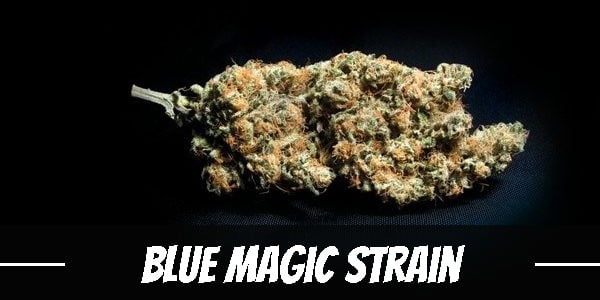 From out of nowhere comes a mostly Sativa strain that balances an intense euphoric buzz without compromising the enhanced ability to focus. Called Blue Magic, its breeder remains unknown. No one can also be sure of its lineage. However, there is a consensus that the original is most likely a phenotype of Blue Dream.

A strain that needs no introduction, Blue Dream itself is a descendant of two prized marijuana plants. Its Sativa structure is an influence of the legendary Haze. Meanwhile, Blueberry passed on its incredible fragrance and full-bodied relaxing high.

In essence, these two are the same plants. However, Blue Magic deviates with its focused high as opposed to the dreamy quality of Blue Dream.

Blue Magic takes people on a magical journey. It acts quickly in inciting a euphoric rush to the head. As it intensifies, most users are likely to experience a degree of visual and auditory distortions. Colors may appear more vivid; sounds become amplified. Instead of crippling users, though, the strain counterbalances it by inducing an uncanny ability to focus.

For most potent Sativa hybrids, the intense psychedelic high can prove to be overwhelming. Even with renewed vigor, staying on track of things to do may prove to be a challenge. And, that is where the true magic of this strain lies. It not only motivates users but also inspires one to move and complete tasks.

In some instances, though, the psychedelic high could become a bit overwhelming. Of course, this is dependent on consumption and tolerance. Users who do end up using more than is necessary may find themselves in a trippy ride with racy thoughts.

Throughout the experience, Blue Magic follows up on the mental stimulation by sending an uplifting body high. Not only does it help enhance the mood, but it also helps people relax with its muscle-soothing effects. In some ways, this Indica trait serves as an anchor for the mental high, so it does not go out of hand.

Blue Magic emits an overpowering fruity fragrance and crushing the flowers releases a strong lemon scent. It has a blueberry aroma paying homage to its progenitor, Blue Dream. In effect, the robust, aromatic sweet smell is a real head-turner.

Clean, creamy smoke with appetizing blueberry flavors is what makes Blue Magic stand out. It has a pleasing sweet tropical richness with lemon overtones that is reminiscent of berry cake.

Expect to experience dry mouth and dry eyes when using marijuana. Not only that, but some people might also experience dizziness after a sudden movement. Apart from these conditions, one thing that is good to know early on is that it has the potential to make some people feel paranoid.

To lessen or avoid the symptoms of these adverse effects, use Blue Magic in moderation.

The high amount of THC in Blue Magic means a fascinating cerebral journey for recreational users. For medical patients though, its painkilling properties are above average. Accurate enough, among its most popular use is a reprieve from pains and aches caused by chronic illnesses and conditions such as migraines, epilepsy, fibromyalgia, and muscle spasms.

For most people too, its ability to enhance the mood has proven to be an excellent means of wiping out stress. It can even help people deal with depression.

As mentioned, one of its unique traits is that it keeps users focused amidst the profound psychedelic high. Such quality can help people with attention deficit disorder, obviously.

Finally, people can also use it to stimulate the appetite.

Blue Magic has small to medium, tight pinecone-shaped buds and lively shade of emerald green leaves. Even though it is mostly Sativa, its dense, fluffy flowers look more like an Indica. It has hairy pistils with pink, red and orange hues and sticky trichomes. Because of its tarry texture, using a quality grinder is recommended for convenience.

It should prosper indoors and outdoors. However, due to its being a large plant, it is not suited for micro growing or growing boxes. Blue Magic is a high yielding plant that is easy to moderate to grow. At this time, however, no seeds are available from seed banks. Hence, cultivation can only be done by obtaining clones.

Taking a cue from its Blue Dream roots, this plant should thrive indoors using either hydroponics or soil. It should also mature after flowering for 7 to 9 weeks and yield up to 12 ounces per square meter.

What is the Blue Magic strain yield?

How much THC does Blue Magic have?

What are the origins of the Blue Magic strain?

Have you ever smoked or grown your own Blue Magic? Please let me know what you think about this marijuana strain in the comments below.