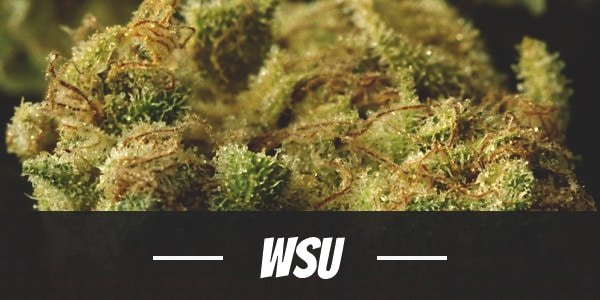 Hearing ‘WSU’ can be quite off-putting for enthusiasts from the Washington State University. After all, everybody is out to have a good time and lectures or term papers are the least on anyone’s mind while taking hits from a blunt. Still, a bud was named after the famous academic institution to rival UW, one of the two state universities in the area.

Unlike many other strains on the market’s shelves, WSU is a pure Indica. Neither is it a cross of two buds. Instead, it is a phenotype of the long standing UBC Chemo. It is said that the bud was developed mainly to address the problems cancer patients experienced after going through chemotherapy.

WSU’s effects are undoubtedly physical in nature. Its potent levels of 20% to 25% THC induce a hard-hitting, stress crushing body high with the potential to lock users to their couches. It also delivers a subtle head high that leaves users feeling calmer and happier. Though purposely created for recreation, it retains enough pharmacological value thanks to the soothing effects of its parent Chemo.

WSU has a reputation for its powerful sedative effects. As an Indica, this is only normal as its powerfully tranquilizing physical buzz is a source of total relaxation for many. Much so that it usually leaves users feeling sleepy within a few hours after the initial onset.

Of course, a lot of the effects depend on whether one overconsumes the bud or not. In moderation, the already pleasant effects are deeply soothing but do not plant a heaviness in the limbs. Nonetheless, its slow starting nature remains true as it usually takes more than a few minutes for the psychoactive compounds to take effect.

It begins with a mellow rush of euphoria swarming the mind many minutes after the first few puffs. The lightened moods are barely noticeable at first but, as it intensifies, users are surprised by the sudden surge of happiness. Many even seem to radiate it.

Interestingly, a physical reaction from the stimulation is a hearty appetite. At this point, it is not uncommon to see some people heading over to the kitchen in search of food. For this reason, it is better to prepare snacks ahead of time so users can ease their cravings before the devastating Indica effects begin.

WSU has a surprisingly refreshing aroma reminiscent of pine. Enhancing it is an undertone of wet soil that make the wood seem freshly uprooted. Broken apart or combusted, a sweet yet subtle note of berry fills the room along with the rest of the scents.

Drawn in, the subtle citric hints of berries and grapes burst in the palate once WSU is drawn in. Blending with it the same undertone of earth that perfectly balance the sweet overtones. On the exhale, it leaves a woody aftertaste similar to that of pine.

Like other strains, WSU has moisture-inhibiting cannabinoids that usually interfere with the production of saliva. As such, it is not uncommon for users to experience a cottonmouth while using marijuana. The eyes also redden to some degree. Luckily, both are barely noticeable due to their mildness. Still, staying hydrated by drinking a few glasses of water before, during, and after the session will keep the discomfort at bay.

WSU’s recreational purpose is no secret. Still, like its forbearer, it remains therapeutically valuable to patients looking for a reprieve from a myriad of health conditions including depression and chronic stress. Through its subtle euphoric effects, it provides temporary relief and comfort to users bombarded by the daily hassles of life. Not only that, it helps manage symptoms of either.

As a pure Indica, WSU’s best use is arguably dealing with aches and other physical issues. After all, apart from inducing the happy high, THC turns into a natural analgesic as it relaxes the muscles with its soothing buzz. The same holds true for sharp cramps or spasms in the stomach which usually leave people without much of an appetite especially those with eating disorders like anorexia or cancer patients undergoing the harsh aftereffects of chemotherapy.

Sleep is one of the most important parts of the healing process. It helps people regenerate cells, replenish lost energy, and even stay sane. A natural sleep aid, WSU prepares the user for a deep slumber by calming both the mind and body. In doing so, it also helps increase the quality and quantity of rest.

WSU is not exactly a short plant. Still, it retains the thick stalks and classic sturdiness of many pure Indicas. Grown outdoors, it can withstand much of the problems caused by moisture in the air, gusts of wind, and fluctuations in temperature. Not only that, its branches do not break off from the weight of its heavy buds. However, this does not guarantee an easy grow.

UW Cannabis Strain, also known as U-Dub, is a full-bodied strain, with a mysterious back story. Read our full detailed review!

In spite of its great performance outdoors, there are still many who prefer cultivating their strain in less fickle settings like greenhouses. Controllable environments allow growers to adjust important factors like temperature, humidity, and lighting – all of which are crucial in helping the plant achieve its fullest potential. Those with limited spaces may want to keep WSU short by topping it early.

The Sea of Green method takes advantage of WSU’s branchy structure. It encourages adequate internodal spacing so branches can produce more budding sites. Pruning may be necessary though so plants can focus their nutrients on healthier plants. Like Chemo, it thrives best in hydroponics but soil is still a welcome option.

WSU takes about a week or two longer to fully blossom compared to its parent Chemo. After an indoor flowering period of 9 to 10 weeks, growers harvest anywhere between 10 to 12 ounces of buds per square meter.

In the northern hemisphere, WSU flowers between the second to the fourth week of October. Once mature, each plant yields at least 12 ounces worth of cured buds.

Have you ever smoked or grown your own WSU? Please let me know what you think about this marijuana strain in the comments below.