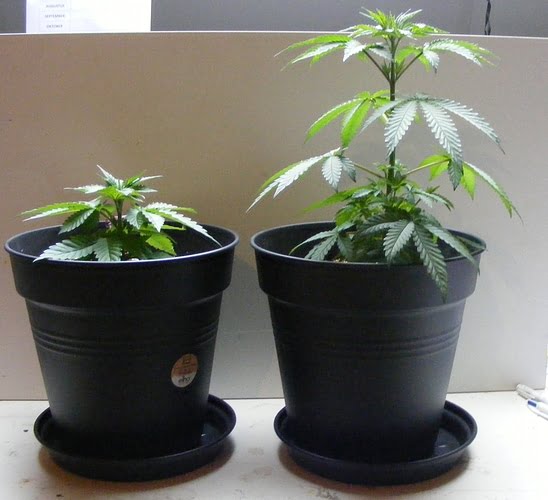 Probiotics from yoghurt are advertised to treat a wide variety of human ailments. However, new research indicates plants may also benefit with a dose of healthy bacteria too! These probiotics cling to the roots of plants, turning nitrogen into a form more easily absorbed by the plant.

This means yoghurt can help plants make better use of limited nitrogen in their environment. Nitrogen is the great problem in plant nutrition and can easily cause deficiencies and nute burns.

This grow journal will explore the effects of yoghurt on growing cannabis plants.

This marks the start of the Yoghurt Chronicles with a mission spanning several weeks: to explore strange, new uses for yoghurt in aiding plant growth, to seek out new microbiotic life, to boldly grow as no one has grown before!

Today, the first of 2 Strawberry Haze seeds sprouted with a nice tap root. She’s Sally. The other seed is swollen and hopefully will pop during the day. The sprouting room has a daytime temp of 21 degrees Celsius.

The seeds are presently in an incubator made from an upside down plastic storage box. Once they stick their little faces into the light, they’ll move into the nursery box under an 85W blue green CFL.

The second seed has sprouted. She’s to be known as SHY. That’s about a 24-hour difference between the two seeds which is pretty good for a control. Now, all there’s left to do is wait until they show 4 nodes before they get treated with yoghurt.

By the way, the medium used for this grow is coco coir.

The girls are enjoying their first day in the sun – rather, lamp. Long and tall sally seems a bit top heavy with that seed husk on her head so she had to be propped up a bit. Shy is just peeking over the top of her little bed. The lamp (85W blue green CFL) is 40cm away from them with the cabinet temperature 23 degrees Celsius.

Not much to see here. This is a very slow part of their growth but Mother Nature couldn’t be rushed. People can only help her.

This drip watering structure is perfect for automatic watering. It’s beneficial to fill it with vinegar and have it drip occasionally into a dish of baking for a small amount of CO2.

The cabinets are opened several times a day to check on the girls. With the fans blowing on the girls, there certainly is no lack of air movement.

All is good. Next month, the girls will be one month old and they’ll be replanted in their permanent home pots.

They both seem kind of small. Shy is only 85mm. They’ve been getting nutes at about 25% dosage which is gradually being increased.

Today is the first day of yoghurt. Shy received ¼ teaspoon mixed with drinking water, pH-ed to 4.2 with a runoff of 5.4. It’s a decent mix for coco coir. She’ll get yoghurt every other watering/feeding session. Sally will be the control plant. She won’t get any yoghurt.

The idea is to see if Shy, who is 65mm shorter than Sally, will be able to catch up to or even surpass her older sister with the addition of the yoghurt. Their growth will also be graphed.

As the chart shows, adding half a teaspoon of yoghurt to Shy’s (green line) water/nute mix seems to have little or no effect at all. Maybe using Turkish instead of Greek yoghurt would have been more effective because the latter has more microbes.

It seems yoghurt doesn’t have that much effect on cannabis. The shorter Shy is lagging so far behind her sister at this point.

They do seem healthy though. At least Shy wasn’t murdered with a silly idea.

Unfortunately, the grow journal ended with that entry. From this vantage point, here are several variables or recommendations which could have been used to make the experiment more successful.

Yogurt should have been introduced from the start. Even seedlings start using nutrients albeit it micro amounts. The introduction of yogurt at this early phase could have helped the cannabis seedling, Shy, grow taller and catch up to her sister.

Multiple experimental plants should have been used too. In this experiment, only one plant received yogurt with a measly dose of ½ teaspoon every other watering/feeding. By having multiple plants, the administration of yogurt could have been experimented with further.

The grower could have designed the experiment in such a way that several cannabis plants were receiving different doses of yogurt every other feeding/watering. For example:

This design would help eliminate the doubt whether or not he is giving enough yogurt. If not possible, he could also have used a different model wherein the plants are receiving the same dose of 0.5 teaspoon of yogurt but at different intervals:

Of course, more plants would mean more factors to control. The most important concern is they should be of the same age, strain, growing in the same medium, and growing in the same environment with the same amount of light. Taking all these factors into consideration will ensure any variations in their growth will be credited entirely to the yogurt – or lack thereof.

Unfortunately, controlling all these factors will be difficult especially towards the later stage in life when these plants would have grown big and competing for light and space.

Are you up for the challenge? Do you think you can successfully test if yogurt has an effect on growing marijuana?