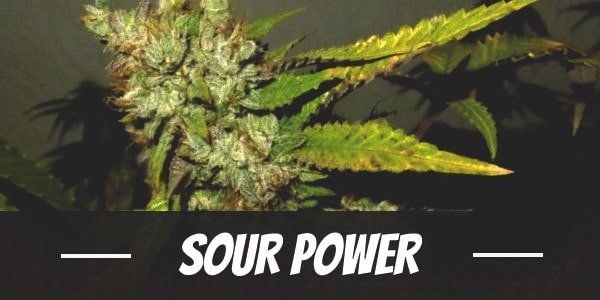 Of more than ten thousand strains created, only a few can say that they bested the parent strains. It becomes difficult when the strains used are award winners. But since its release, one hybrid has been so damn good that it became much more than its predecessor. Called Sour Power, it is a three-time winner of the High Times Cannabis Cup.

To create this strain, HortiLab Seeds used their signature StarBud, the 2009 Best Indica in the High Times Cannabis Cup. It brings with it an uncanny ability to induce complete body relaxation that often leads to users sleepings. They then crossed StarBud with East Coast Sour Diesel, a mostly Sativa strain known for its insanely high potency.

By crossing these two strains, the resulting offspring took most of the Sativa genes along with the relaxing properties of the other. As alluded to, Sour Power did not only win once but thrice. Hence, it is one of the rare strains that upstaged their highly touted parents.

Being Sativa dominant, users can expect a very intense cerebral buzz. As such, it may not be the best strain for beginners.

Sour Power does not waste time. It kicks in hard at the onset, and that is to be expected. In some tests, its THC has been measured to reach as high as 29%. Hence, it is among the most potent in the world. It is also its potency that inspired its name. It also means that beginners should avoid it and start off with the less powerful strains.

As soon as the strain manifest its effects, a buzzing energizing sensation comes surging into the mind and the body. Within moments, users feel their mood swinging to elation. It then leads to a clearer mind even as ideas start flowing freely. Feeling energetic and motivated, users can do their tasks and often with glee.

Sour Power is a great party strain in that it makes people more sociable. In fact, even the deaf can start talking non-stop under its influence. As the buzzing in the head is evident and its intensity sustained, the cerebral effects of the strain do not go over the edge. Before it overwhelms the mind, the physical high brought on by its small Indica side acts as an anchor to stabilize the mental high.

But once the effects breach tolerance limits, it can lead to more pronounced adverse reactions. Not that they are life-threatening or poses a long-term health risk, but they can be quite unpleasant.

Sour Power has a blend of earthy, skunky, and woody scent that is unique and for most people, will take a little bit of time to get used to. But it does have a sweet and sour note to mask its odor and in some ways, makes it acceptable.

Although it does not have the best of scents, it does better when it comes to its flavors. The taste of fuel masks its skunky and woody taste with a strong sweet and almost fruity berry note.

In most cases, if there is a side effect of using Sour Power, it has to be dry mouth. To a lesser degree, this can also be accompanied by dry eyes. These are very common with the use of marijuana. But Sour Power is exceptionally potent. Once users overuse it, other effects become pronounced. One is feeling dizzy, and this is mostly due to the intense mental buzz of the strain.

However, there are also a few people who may experience feeling more anxious and paranoid. For some, it is due to being caught off guard. As for others, it is simply that they are more predisposed to these kinds of effects.

Again, use Sour Power in smaller amounts than usual. Users should never underestimate the intensity of its effects.

The suddenness of the cerebral effects of Sour Power also comes with an uplifting buzz. Hence, many users benefit from its ability to wipe out stress. At the same time, it also helps people with mental health issues control or manages their conditions. For instance, it helps them deal with bipolar disorder better as well as depression.

As it takes away the focus of people from concerns and worries, and combine that with the physical effects, it then helps people alleviate the symptoms of pains and aches. As if drinking a cup of double espresso, the energy boosts it gives allows users fight off fatigue.

Another use of Sour Power in the medical cannabis community is in stimulating the appetite. In most cases, people feel starving an hour or two after using the strain. If that is a health issue that a user is dealing with, then this hybrid can help.

Sour Power grows in both indoors and outdoors. It also has the trait of a Sativa plant. Hence, it has a longer flowering time. Furthermore, it can grow quite tall. While this is not a problem in the garden, there is more work to do if cultivating it indoor. That includes topping it as early as possible to limit its height. Instead, it should help in promoting lateral growth.

Sour Power has a flowering time that begins on the 10th week. It can be quite generous in that each square meter can produce 18 to 21 ounces of buds.

Free to grow tall, Sour Power will want to be in a spot where there is plenty of sunshine. Each tree can produce at least 21 ounces of buds. The transition to the flowering stage should fall between October and November.

Have you ever smoked or grown your own Sour Power? Please let me know what you think about this marijuana strain in the comments below.