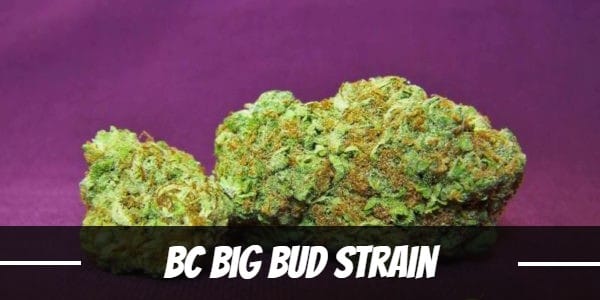 Amsterdam does not have a monopoly on a strain that can produce massive yields like the great BC Big Bud Strain. As it turns out, British Columbia also has its version. Some say it is a cousin and that may very well be true. At any rate, BC Big Bud brings its traits to the table and one that pleases both recreational and medical users.

The original Big Bud was first bred in the United States. At the height of the war on drugs, it found its way to Amsterdam. In a sense, that was fortunate because it ensured its continued survival.

Big Bud is an Indica dominant strain. By crossing it with an unnamed Sativa, the offspring named BC Big Bud inherited the Sativa side. In a sense, both strains are related, but they are also not the same. Where the former induces a profoundly relaxing experience, the new one takes users on a cerebral journey.

BC Big Bud is not only popular with the users. It is also especially popular with commercial growers. Besides the massive yield, it matures earlier than many others with comparable production.

BC Big Bud is colossal not only in size and its yield. It is also a heavy-hitting strain. On THC content, it does not stand out among the many new hybrids in the market. But it is the speed at which it kicks in that adds to the rush.

Most people using it initially feel an uplifting sensation surging in. It then induces a clear-headed euphoric cerebral high that leaves users feeling happy. As its effects continue to intensify, it becomes invigorating and energizing. Most people feel highly motivated to do what they need to do.

Meanwhile, the smaller Indica side of BC Big Bud complements the mental effects by putting users at ease. It also acts as some stabilizer to ensure that the cerebral high do not go out of control.

BC Big Bud emits a pungent odor with the strong scent of citrusy orange. In some ways, the fruity smell casts the strain as a gentle giant. Of course, that is not true as this remains a very potent hybrid.

While the aroma of BC Big Bud is straightforward, its taste is anything but ordinary. A very mild skunky note is barely detectable. But it is the fruity orange flavor that is more distinct. A tangy lingering aftertaste further enhances its already delectable smoke.

Like many others, BC Big Bud is no different in the sense that it also has its side effects. For instance, it causes many users to feel their throat dry. It can also cause droopy red eyes.

Once personal tolerance limit is breached, other adverse reactions may arise. Usually, the deep cerebral effects can cause dizziness. Other possible adverse effects include feeling paranoid or an increase in anxiety level. Hence, users are advised to use this strain in moderation.

It is hard to fight off depression when the world has turned a blind eye, and the burden is on one’s shoulder. But BC Big Bud has proven to be quite effective in stress relief. In essence, the hybrid induces cerebral euphoria. A side benefit of this is taking the mind away from ill thoughts.

BC Big Bud does not induce a numbing buzz. For that reason, anecdotal notes on its benefits with pain-relief tend to be more psychological rather than an actual physical manifestation.

One thing that most people feel a couple of hours after of using the strain is starving. A few people may have thought of this as an adverse reaction. Of course, that is subjective and simply is beyond the scope of this article. Suffice to say; it can help people who need a little nudge improve their appetite.

BC Big Bud is not for beginners. But that is not to say that beginners have no chance of cultivating it successfully. It does need more tending than usual. Also, it is susceptible to mold. So, that is something that growers have to watch out for as well as ensuring proper humidity.

As mentioned earlier, BC Big Bud grows fast. It has a flowering time of 8 to 9 weeks. Use soil as a medium or even better, hydroponics, does not matter. What is important is to use a training method such as the Sea of Green technique. Trimming and pruning to encourage more lateral growth is also something that needs to be done. Despite the amount of work in entails, the reward comes in the form of up to 31 ounces per square meter.

One thing growers need to remember is that in an open area, the stems may need support. That is due mainly to the resin-covered dense buds that may become too heavy. Because of that, a cluster of buds may damage the stems. Flowering time should fall on the first days of October. Each plant can also produce 29 ounces of buds or more.

FAQ About BC Big Bud Strain

What is the BC Big Bud strain yield?

How much THC does BC Big Bud have?

What are the origins of the BC Big Bud strain?

Have you ever smoked or grown your own BC Big Bud? Please let me know what you think about this marijuana strain in the comments below.

3 comments on “BC Big Bud Strain”