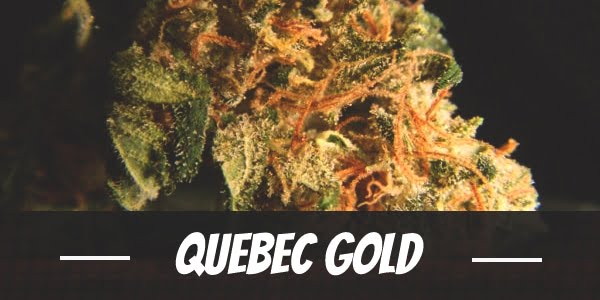 Some of the best strains in the world do not have to come from Europe, Asia, or the USA. Amsterdam has its infamous coffee shops. California has Humboldt County and the gold rush in the past. Never forget, though, that there is Canada up north and the exceptional Quebec Gold.

One thing that needs to be mentioned early on is the confusion with the real Quebec Gold. In Quebec and other parts of Ontario, it has become a practice, in instances the name of a strain is unknown, they merely call it Quebec Gold. In other words, it is true that there are people who are passing off different strains as the real deal because of its outstanding reputation. However, in many cases, the intent is not to scam people. For clarity, the Quebec Gold we are referring to is the one from BC Seeds.

Quebec Gold, on its being a highly-regarded strain should not come as a surprise. In fact, looking at its genetics, it is easy to understand why.

One of its parent strains is M-39, itself a cross of Northern Lights No. 5 and Skunk No. 1. These are the best phenotypes of two timeless strains that have spawned the most prominent lines in the world of cannabis. M-39 was used to cross with Freezeland, a hybrid that is native to Quebec.

M-39 is a problematic strain to grow. Fortunately, Quebec Gold took the growing traits of Freezeland. As a result, even beginners should have no trouble cultivating it.

As of this time, the exact ratio cannot be determined, but Quebec Gold does lean more to its Sative side. Looking at its THC content, the highest level it was tested to is 26%, an unbelievable amount. In many cases, the effects of the strain may not be unusual, but the sheet potency alone is more than enough to take it to another level.

Typical of Sativa strains that come with as much THC as this one, it starts by sending a euphoric buzz to users. In no time at all, these people feel uplifted and energized. Early on, it also helps users clear their head. As a result, they are not only able to do their tasks, but with heightened focus, they are also able to do it better.

Such feeling is also often conducive to being more social. In the company of other people, users will talk and keep on talking. Perhaps they make sense, or maybe it is the opposite. That is because Quebec Gold can be quite overwhelming where the cerebral buzz becomes a little too much.

However, before one starts to have a psychedelic experience, the Indica side of the strain kicks in. It comes with sedative-like properties that induce a relaxing sensation. Some people may also experience a tingly buzz all over the body.

Having the ability to induce a wonderful cerebral buzz, the strain also has an odor to match it. In some instances, it is possible for users to detect a very mild hint that is reminiscent of its Skunk lineage. But most of the time, it is drowned by the dominant citrusy scent of lemon.

As much of its scent carries over, the added fruity note of orange blends in well with the lemony taste. As a result, Quebec Gold is has proven to be a delight to use. In many ways, it sets the tone for the incredible journey it takes the users to.

Users can expect to experience dry mouth and eyes, and it becomes more pronounced as usage becomes higher. Not only that, there are other reactions to watch out for.

In instances when the urge is too hard to resist and resulted in using too much, some people may feel dizzy or more anxious. This is more evident with people who are new to using marijuana.

The intense cerebral effects of Quebec Gold results in the reduction of stress level. But where it stands out among medical cannabis users is how it is used to fight off depression.

To a certain extent, it may be useful in the temporary boost in energy level; it is also negated once the Indica side kicks in. A few people may also feel starving before the effects of the strain completely wear off. If that is not the case, then they will as soon as they wake up in the morning.

Quebec Gold is considered to be easy to grow. But the best thing about it is that it thrives even in colder climate. Obviously, these are traits inherited from Freezeland. Regardless if growers cultivated it indoors or outdoors, it often could produce massive amounts of buds.

Flowering time indoor is between 7 to 8 weeks. While its effects lean more towards Sativa, it grows like an Indica plant. Once harvest time comes, it has a yield of up to 32 ounces per square meter.

As mentioned, Quebec Gold thrives in a colder climate. In fact, it is also because of the lower temperature that gives it a color that is close to gold. At any rate, each plant can produce up to 30 ounces of buds. It transitions to the flowering stage sometime in September.

Have you ever smoked or grown your own Quebec Gold? Please let me know what you think about this marijuana strain in the comments below.