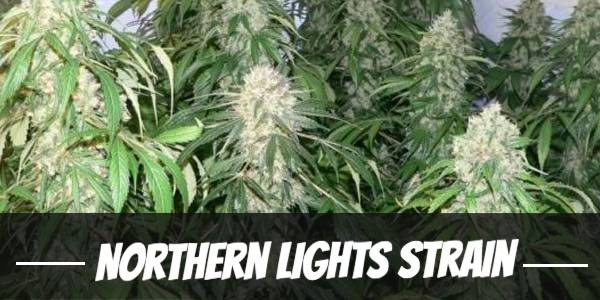 If you know anything about strains, you would know about this one. A renowned and respected near-pure indica strain, Northern Lights strain has become a famed relaxant. This strain is big among indica-lovers, and with good reason – it is notoriously happy-go-lucky and perfect for putting a troubled mind to sleep.

By mixing an Afghani indica with a Thai sativa, Northern Lights was created. Hailing from the outskirts of Seattle, Washington, it was propagated out of the Netherlands in 1985 and has since become a legend in its own right.

Its reputation for being fast-acting and an instant hit is everything Northern Lights is about. For this reason, it has gained traction in California, and has quickly climbed up the ranks for one of the most in demand strains.

As is expected from a clear indica, the feminized autoflowering Northern Lights marijuana indica strain is a soothing-smooth friend who will ensure you some real relaxation. It induces a powerful heavy-body high that makes you want to sink into your couch and stay in there, nestled and tucked in.

The flow that Northern Lights pulls you into, is one guaranteed to conjure all your happy thoughts. If you want to experience that flow, then make sure to check Northern Lights #1 in our Marijuana seed shop.

Whatever it is that has been bothering you until that first puff, is guaranteed to go up in smoke. If you need an extra hand at falling asleep, then this is the afghani landrace strain for you. Its gentle effects will uplift you while gently rocking you into a restful slumber.

There is a certain euphoric high that comes with Northern Lights and the smiles and laughter is guaranteed to be instantly infectious.

Northern Lights has a very distinct scent to it. Its sweet and spicy notes follow you around, and are broken up with a hint of bitter lime. Some have reported noticing a bit of an ammonia smell to this strain, but with the hint of citrus, it makes for a pretty invigorating smelling strain.

The flavor of Northern Lights is quite skunky and full-bodied, without being overpowering. It hints at fresh pines and earth mixed with a bit of sweetness. A trace of lemon can also be observed when smoked, and it can leave a sweet dank taste inside your mouth afterwards.

There are many popular strains that are direct descendants of the Northern Lights #5. Read our full review on White Smurf Strain that was created by crossing Northern Lights, Skunk No.1. and Dutch Sativa

One of the reasons why this strain has become so popular among indica-lovers, is because of the minimal adverse effects. Northern Lights strain can occasionally cause a feeling of not being able to move from the spot, which can often be confused with paranoia. You can purchase this at virtually any dispensary.

As a whole, it is rare for users or growers of Northern Lights to feel dizzy or have a headache, but it can occur sometimes. The most commonly reported adverse effects are the usual cottonmouth, combined with a dry eyes sensation and a feeling of being dehydrated.

Widely recommended for its supreme medical abilities, Northern Lights is a favorite among those seeking to treat physical pain as well as mental instabilities. Mood swings and depression are easily relieved by this strain’s uplifting personality.

Because of Northern Lights’ generous CBD content, it has also proven to be effective in treating pain. Its potency guarantees the easing of pains and cramps from conditions such as irritable bowel syndrome, PMS, arthritis, muscle spasms and many more.

Patients who have been diagnosed with mental conditions have also benefited from the use of this strain.

Northern Lights strain can ease symptoms and side effects from the treatment of OCD, social anxiety disorder, general anxiety and PTSD. It is a powerful relaxant, that can induce sleep in those who suffer from insomnia and restlessness.

Do you want to learn more about growing in Jamaica? Download out free Ganja Livity Ebook!

In cases where cancer patients were treated for a lack of appetite due to radiology and chemotherapy, Northern Lights has also proven to be a suitable choice. It can help ease the feeling of nausea, and successfully curb hunger.

Northern Lights is a strain that is known for being seriously easy to grow. It is a relatively small to average growing plant, with distinctive amount of resinous buds. This strain cannabis can be grown indoors and also outdoors for all experienced growers.

If grown outdoors, Northern Lights prefers a warm and sunny environment, thriving in balmy Mediterranean, Californian or North African settings. This plant can flourish into a tree when kept in full sunlight and tended to carefully, but is generally not a fussy plant to care for, and is great for beginner growers looking for indica landrace seeds.

This strain reportedly takes an average of 7 to 9 weeks to flower, although there are times when it is ready for harvest after only 7 weeks. Northern Lights cannabis strain can yield an average of 18 ounces per square meter in a healthy indoor environment.

Northern Lights No. 5 is an improvement to the original strain with regards to its potency. Here is our full review!

When kept in its preferred sunny climate, this strain can give a generous harvest. This indica dominant landrace seed can produce an estimate of up to 22 ounces per plant, and is usually ready for harvest around the middle of October.

Our free little Harvest Guide will help you determine the best moment to cut your plants. Download it here.

What is the Northern Lights strain yield?

How much THC does Northern Lights strain have?

What are the origins of the Northern Lights strain?

Northern Lights was first bred in the outskirts of Seattle, Washington, by crossing an Afghani Indica with a Thai Sativa.

Have you ever smoked or grown your own Northern Lights indica kush strain? Please let me know what you think about this marijuana strain in the comments below, or check out our seed bank.