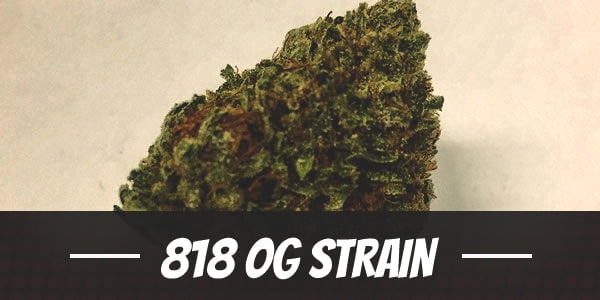 Much has happened at the 818 with regard cannabis development. From its farms is the famous San Fernando Valley (SFV) OG which has impressive medicinal and recreational properties. Coming from the same area is 818 OG, a pure Indica that delivers a tranquilizing body high that crushes stress in its wake.

818 OG is a cut from the Californian staple OG Kush which has parented more than a hundred strains from the West Coast. Compared to its parent, it is sturdier with effects that gear towards the body. Despite this information, it remains quite an elusive strain with its breeders staying behind the scenes to produce the popular bud.

818 OG’s onset is marked by a slow but uplifting buzz that gradually enhances the mood. It fills the mind with a subtle euphoria that brings back cheerful thoughts that leaves users feeling happy. Not to mention, its fruity undertonse and sour overtones invigorates the senses.

One of the best times to use 818 OG is right before a meal. It enhances the appetite to replace the lost energy from the stimulating head high. Having snacks prepared will work toward one’s advantage. Not only does one stay comfortable while lounging around the couch or the bed especially once the body buzz begins.

A light pressure gradually intensifies around the temples. It creeps into the muscles as a tingling sensation that makes its way down to the toes. In all likelihood, users will feel burdens lessen as the Indica effects soothe and knead the body. Keeping it from totally taking over and locking users to the couch is the initial effects.

In spite of this, it later develops into a heaviness in the limbs after about two or three hours. Using it in the morning can be counterproductive. It is best consumed at night so users can bask in the stress-crushing tranquility without feeling worried of staying alert.

818 OG has a pungent aroma with strong earthy overtones. If anything, its scent is similar to flowerbeds being turned over where the wet soil gives off a subtle floral scent. Not to mention, it has a sour undertone with overtones of fuel. Crushing and combusting the buds reveals its hints of fruitiness.

Similar to how it smells, 818 OG has an earthy flavor that eventually develops into a floral blend as the smoke swirls inside the mouth. There is a subtle sourness along with a hint of fruit reminiscent of citrus. Eventually, it develops into a more intense fuel especially on the exhale.

Although rare, it is possible for users to experience a subtle feeling of paranoia when going beyond tolerance levels. One’s disposition can be a possible cause too. Pacing and moderation is usually the best recourse when such effects occur although one may also stop using the bud. A more unavoidable reaction is dry eyes and a cottonmouth which result from cannabinoids inhibiting moisture production instead of dosage. Although inevitable, users may down a few glasses of water throughout the day to ease the discomfort.

Many users turn to 818 OG as a source of reprieve by patients. It has cannabinoids, such as THC, CBD, and terpenes, that ease a wide array of mental and physical health issues. The upliftirng high it delivers at the onset, for instance, counters the overwhelming dread and negativity triggered by stress. Similarly, its ability to enhance the mood while simultaneously removing negativity is a source of comfort to long-sufferers of depression, anxiety, and other mental health issues like PTSD.

818 OG, with its high levels of THC, deliver painkilling effects. It soothes the body while releasing pain or aches throughout the body. It ability to relax the muscles also reduce swelling and redness caused by inflammation. As the blanket of relaxation becomes heavier, 818 OG lulls users into a deep, unencumbered slumber. Its sedating properties improve the quality and quantity of sleep that invigorates one the next day.

Its tranquilizing abilities shine through best when it reduces turbulence in the gastrointestinal tract. Because of this, cancer patients can use 818 OG to reduce the nauseating effects of chemotherapy.

Indicas are famed for being sturdy and 818 OG is no different. It has a thick frame that stands tall against strong winds. Not to mention, it signifies its ability to withstand a variety of growing conditions including the cooler weather of the northern hemisphere.

If anything, the major problem that growers have with 818 OG is that its foliage is too dense. It can hinder proper airflow and light distribution especially among the lower nodes. Left unattended, it can harbour moisture in its crevices as well as prevent the soil from drying properly which may stunt its growth as it develops into mold or mildew. Thus, pruning is necessary when it comes to growing the strain.

818 OG works best with the Sea of Green method. It takes advantage of its naturaly compact structure inside a small growing space so it yields higher. Growers can cultivate at least four seeds within a single square meter when growing the plant outdoors.

TIP: Buy seeds like 818 OG at our marijuana seed bank

Another problem that growers may face is growing out its roots. As alluded to earlier, it is a cut or clone of an original mother plant. It will be sensitive during the first few weeks but will become sturdier as it grows its roots.

818 OG has a short indoor flowering period of 7 to 9 weeks. It yields between 10 to 12 ounces of buds per square meter at harvest but growers can manipulate the plant for higher yields.

After blossoming from the last week of September to the middle of October, 818 OG produces a yield of at least 12 ounces of buds per plant.

Have you ever smoked or grown your own 818 OG? Please let me know what you think about this marijuana strain in the comments below.