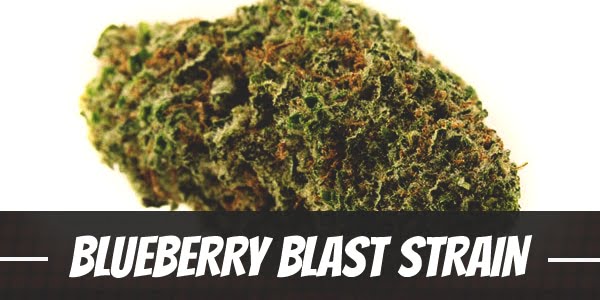 Blueberry Blast is almost every Sativa connosisseur’s favorite bud. It has energizing effects that ensure users stay awake throughout the day especially in the mid afternoon or siesta. Indeed, one is guaranteed with a blast as it leaves users feeling giggly, happy, and upbeat. Not only that, it is a staple among terpene enthusiasts for its sweet but tangy blend of fruits with an aftertaste of wood.

Of course, nothing short is to be expected of the Blue Dream offspring. It has a dreamy high that stimulates the mind and inspires creativity as the mind drifts off to the clouds. Johnny Blaze, on the other hand, improved its growth profile by adding thickness to its frame.

A behavioral change is instantly visible within minutes after taking two or three puffs of Blueberry Blast. After all, it does deliver a buzz of energy throughout the body beginning from the mind. As such, it should come as no surprise to find users smiling for no reason or becoming more and more talkative. The euphoria also encourages an upbeat disposition.

One of the best times to use the strain is right before a meal. It stimulates the appetite to replenish any energy that was lost. Preparing some snacks and situating it nearby will prevent one from breaking concentration. Moreover, it fuels the upcoming body high.

After about an hour or two, a light pressure forms around the temples. It eases to the rest of the body as users continue to take a swig. Gradually intensifying, it later makes its way down to the toes. It eases the muscles it passes through without planting a heaviness in the limbs. Blueberry Blast is best reserved for use in the morning or early afternoon. Its invigorating rush enlivens enthusiasts on a casual day where one has to stay awake for work. Using at night will only be counterproductive as it pushes back one’s bedtime.

Blueberry Blast is a strain with a strong but sweet scent. It has undertones of fruit, reminiscent of crushed blueberries blended with berries. Later, as the buds are either broken apart or combusted, a subtle musk of woody cedar along with the aroma of citrus fill the air.

Blueberry Blast coats the palate in a delicious cocktail of blueberries, berries, and citrus. There is a subtle tanginess when inhaling its smoke however, it is quickly drowned out by a sweet undertone. On the exhale, it leaves a woody aftertaste that blends perfectly well with the fruity overtones.

It is likely for users of Blueberry Blast to feel a little anxious while smoking the bud. Apart from being potent, its stimulating head high sharpens the senses to the point of disorientation or subtle paranoia. Thus, pacing and moderation must always be practiced. Dryness, on the other hand, is a more inevitable experience. It manifests in the eyes and the mouth but is overall mild. Still, if the discomfort persists, downing a few glasses of water throughout the day will ease it.

Blueberry Blast is truly a blast to smoke. It delivers a euphoric head high that instantly brightens the mood. It clears away negativity that incites self-depreciating thoughts. At the same time, its calming mental uplift also appeases the overwhelming anxiety that one experiences during stressful situations. Hence, it is among the best choices for managing symptoms of depression and other mental health issues like PTSD.

High levels of THC also make Blueberry Blast an effective pain reliever. It eases away physical distractions that make relaxing or sleeping difficult. As it removes the aches and pains, it also invigorates the body from over exhaustion or fatigue. The same soothing properties also appease turbulence in the stomach. It keeps users from vomiting as well as feeling lightheaded or dizzy. Patients suffering from the nauseating side effects of chemotherapy.

Blueberry Blast is stronger than it looks. Its frame, despite looking quite lanky, is quite sturdy. It performs well grow outdoors and indoors. Not only that, it can withstand a myriad of growing conditions. Hence, it is a great introductory strain for beginners.

Its propensity for long days under the sun means it grows better in the Mediterranean. This is not to say that it will have difficulty growing in the northern hemisphere where the weather is generally cooler. However, it may take longer to flower as the days are shorter. Strategically planting it in an area where the light hits will help Blueberry Blast grow bigger.

Indoors, growers may adjust the lighting to at least 400 watt lights. Though it may not supplant the sun, it does provide enough intensity to provide a square meter of Blueberry Blast enough ligh to increase bud production. Replacing it with light fixtures with higher lumens will significantly increase yields. Apart from that, growers may want to top the plant to keep it short and manageable. Otherwise, it can grow out of proportion.

Blueberry Blast has an indoor flowering period of 9 to 12 weeks. It produces between 12 to 16 ounces of buds per square meter at harvest. Growers can manipulate the plant through the Screen of Green method.

In the northern hemisphere,  Blueberry Blast blooms from the second to the last week of October. A lover of the sun, it should come as no surprise that it yields high with at least 16 ounces of buds per plant once ready for harvest.

What is the Blueberry Blast strain yield?

Blueberry Blast yields 12 to 16 ounces per square meter indoors and 16 ounces or more per plant outdoors.

How much THC does Blueberry Blast have?

What are the origins of the Blueberry Blast strain?

Blueberry Blast was created from a mix between Blue Dream and Johnny Blaze.

Have you ever smoked or grown your own Blueberry Blast? Please let me know what you think about this marijuana strain in the comments below.