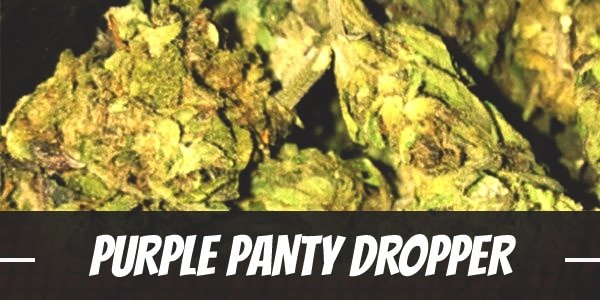 Purple Panty Dropper is an indelicate name. It is appropriate, however, as it alludes to the strain’s ability to deliver a good time. Its effects start with a stimulating head high that spreads all over the body as a tingling sensation that wakes the body. Its comedown, however, is a tranquilizing high that perfectly envelops users in deep relaxation.

The signature strain from Humboldt Seed Company is also an exception in the grow room. It is stable, coming from an F4 Generation that has weeded out majority of undesirable qualities in its plants through phenotype hunting. Hence, growers can expect Purple Panty Dropper to produce big plants with almost-uniform growth.

To create the stable bud, the breeders took three staple strains in the industry for the desirable traits it exhibit. It gained its classic Sativa onset and subtle stimulating qualities from Purple Haze. Meanwhile, its tingling body sensations and soothing comedown is a characteristic of the clone-only Oregon Grape. Further improving its growth profile is the elusive Matanuskan Mist which strengthened its frame as well as doubled its trichome production.

Purple Panty Dropper is a potent strain with a powerfully heavy-hitting high. Its THC levels of 18% to 25% can overwhelm the mind and lock users in place. Thus, users should always stay cautious while consuming its buds. With that said, its onset is a light cerebral euphoria that uplifts the mood.

Within minutes after it settles, there is an immediate change in a user’s behaviour. It lifts spirits in a dreamy cloud. If anything, the sensation is similar to floating in carefree happiness as one slips into a casual disposition.

A tingling sensation creeps into the temples, soothing the mind before it eventually moves down to the rest of the body. It releases tension from the muscles to fully free users from any accumulated stress. Planting itself in the limbs is a heaviness that, in all likelihood, will entice users to lounge around the couch or bed before settling to an evening of relaxation.

Overall, Purple Panty Dropper is best used on a day off, early in the evening, or a few hours before bedtime. It ends with a sedating buzz that cradles users to sleep. Using it in moderation, however, can lead to a good time between lovers. After all, it did earn its name from its aphrodisiac qualities.

Taking a whiff of Purple Panty Dropper is like walking through a garden full of flowers. It has a sweet floral scent with a strong earthy aroma. Combusting the buds or crushing it releases its pungent fruitiness which has the delicious undertones of grape.

Richly coating the palate upon the first swig is the sweet but tangy taste of ripe grapes. It later develops into a rich floral flavour accentuated by the taste of wet soil. On the exhale, it leaves a fruity aftertaste that convinces users to consume a few more tokes.

Dry eyes and a cottonmouth are two common reactions to smoking cannabis. However, due to its mildness, it is often ignored by users due to its mildness. A more cause for concern is greening out especially when using beyond individual tolerance level. Its high levels of THC can induce a keen awareness that makes one feel either anxious or paranoid. For the most part, the side effect is limited to a headache which lasts for hours. Although rare or light, users should still pace consumption of the bud.

Purple Panty Dropper’s effects actually go beyond the recreational. Its uplifting head high, for instance, significantly reduces stress. It clears the mind of overwhelming dread triggered by stressors and the anxiety that comes with it. However, its best use is centered on the body.

Its high THC levels contain impressive painkilling effects that relieve the body of aches. Preventing the muscles from contracting uncontrollably is a soothing buzz that starts at the temples before rushing down to the toes. Hence, it makes for a great antispasmodic against spasms especially in the gastrointestinal tract which can sometimes prevent one from eating heartily. By relaxing the stomach, it invigorates one’s appetite so patients can eat without being interrupted by eating disorders like anorexia or cachexia.

A good night’s rest can help hasten the healing process. It stabilizes turbulent hormones while giving users a break from experiencing knee-jerking physical pain. Through its sedating properties, Purple Panty Dropper entices users to sleep earlier while improving both its quality and quantity.

Purple Panty Dropper is a big plant with a sturdy frame. It is moderately dense which improves its resistance against humidity and other growing conditions like the wind or cold. Because of this, it is a great introductory strain for first-time growers. Although, one may need to ensure that it develops into a full batch of females which have calyxes that produce buds.

At the moment, Purple Panty Dropper is only available in regular form. Growers will need to subject the seeds to pre-germination techniques such as overnight soaking to increase the chances of producing a female plant. During the flowering period, stressing the plant must also be avoided. Otherwise, it can turn into a hermaphrodite which either does not flower or yields substandard buds.

One unique aspect of Purple Panty Dropper is its uniformity. Due to its stability, it will rarely produce phenotypes with notable differences from the mother plant. This eases the growing process as growers can subject the whole batch to the same techniques or setups. With that said, it works best with both the Sea and Screen of Green method. Both will train the plant to produce higher yields while taking advantage of small spaces.

Purple Panty Dropper matures quickly with flowers blooming within 7 to 9 weeks from the start of the flowering period. It yields between 10 to 12 ounces of buds per square meter at harvest. Growers can further enhance yields by manipulating the plant.

In the northern hemisphere, it flowers from the last week of September to the middle of October. It yields high with each plant producing at least 12 ounces of buds per plant.

What is the Purple Panty Dropper strain yield?

It yields 10 to 12 ounces per square meter indoors and 12 ounces or more per plant outdoors.

How much THC does Purple Panty Dropper have?

What are the origins of the Purple Panty Dropper strain?

It was created from a mix of Purple Haze, Oregon Grape, and Matanuskan Mist.

Have you ever smoked or grown your own Purple Panty Dropper? Please let me know what you think about this marijuana strain in the comments below.