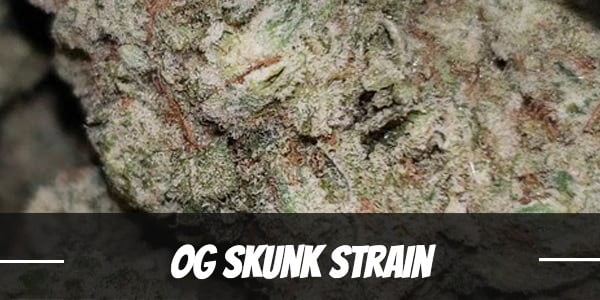 OG Skunk is a sativa-dominant hybrid that brings out the tangy terpene profile of its parents OG # 18 and Skunk #1. The former is a descendant of the original ocean grown strain. Like hundreds of its siblings, it has the distinct lemon flavored smoke that induces a stimulating psychoactive effect that eventually tapers into a relaxing euphoria. However, like its parent, it has a weakness against high levels of humidity. To address this, the breeders added Skn # 1 to improve its overall sturdiness.

Apart from its distinct scents and flavors, OG Skunk is also famous for its recreational effects. It has a wake and bake onset characterized by an awe-inspiring high that improves both the mood and productivity. On the other hand, it has a tranquilizing physical buzz that crushes stress all throughout the body.

It is an impressive therapeutic herb as well. Its delicious smoke has the energizing quality of citric terpenes that invigorate the senses. Meanwhile, its restorative head to toe high is a great source of comfort for patients dealing with mental and physical health affliction.

OG Skunk is not one to waste its time. Within minutes after the first two or three puffs, it delivers an uplifting euphoria that enhances the mood. A behavioral change is instantly noticeable once the onset settles. Users seem happier compared to when the high began especially as a rush of euphoria cradles the mind.

For  casual enthusiasts, the mental clarity is a source of inspiration. It stimulates creativity by allowing thoughts to flow and form freely in the newly created headspace. It should come as no surprise that ideas bounce off from mind to paper. The added boost in confidence also encourages users to openly discuss during a brainstorming session with like-minded friends without shying away.

Looking to buy seeds like OG Skunk ? Check out our marijuana seed bank.

A light pressure begins to build around the temples. Subtle at first, it gradually intensifies as users take a few more swigs off of the sour smoke. It relaxes each muscle it passes through as it makes its way to the toes. Enveloping users eventually is a blanket of relaxation that invigorates the body. It complements the initial head high by allowing one to perform light physical tasks.

A great wake-and-bake strain, OG Skunk is best used in the early afternoon as a pick me up. It energizes users before developing into a deeply tranquilizing high that prepares one for bed. When used in moderation, its effects place more emphasis on mental clarity.

OG Skunk is, without a doubt, a pungent strain. Its distinct terpene profile has a skunky overtone with sour undertones that remind users of fuel or diesel. Crushing then combusting the buds releases its tangy citrus scent with hints of sugar.

In the palate, OG Skunk bursts into a myriad of flavor. A sourness is most notable at the first swig before it breaks into hints of fuel, diesel, and skunk. Swirling the smoke inside the mouth brings out its fruity overtones that eventually leave a citrus aftertaste on the exhale.

Apart from the usual dry eyes and cottonmouth, users may also green out while using OG Skunk. It is marked by a keen awareness that disorients the mind, causing anxiety levels to rise. Although the side effects are mostly limited to a headache, practicing pacing or staying cautious while consuming the bud will prevent it. For the inevitable dryness, on the other hand, one may down a few glasses of water during and after the session to ease the discomfort.

OG Skunk is a source of reprieve for long-sufferers of chronic stress. It delivers an uplifting head high that instantly brightens the mood. It clears the mind of negativity too while its soothing euphoria calms the overwhelming dread caused by life’s stressors. Because of this, it can also be used against anxiety as well as manage mental health issues like depression or PTSD.

One of the best ways to use OG Skunk is to address a lack of appetite, either as a result of cachexia from disease or an eating disorder like anorexia. It gradually soothes the stomach so it does not cramp from food being reintroduced into the gastrointestinal tract. Patients eventually eat meals more heartily as it persists. In a similar manner, the Sativa-leaning strain’s relaxing buzz also reduce aches and pains all over the body. Meanwhile, its stimulating properties relieve fatigue.

Looking to buy seeds like OG Skunk ? Check out our marijuana seed bank.

Sleep is one of the most important parts of the healing process. It stabilizes hormones and can bring back one’s zest for life the next day. Through its sedating properties, OG Skunk cradles users to a deep slumber while enhancing both its quality and quantity.

OG Skunk is a sturdy strain. It has a thick frame which are indicated by its thick branches and leaves. It is also quite compact which allows growers to strategize its placement with ease. Because of this, it is a great introductory strain for aspiring beginners.

It grows with relative ease in the northern hemisphere due to its propensity for cool weather. However, it will need to be transferred indoors when the weather is harsh such as during heavy rains which may snap its branches into two. If it is inconvenient, one may also choose to install a temporary enclosing in the are. This will also keep it safe against the frost or snow that might kill it overnight.

Indoors, it will need to be pruned often to thin out its dense foliage. Otherwise, it can harbor moisture in between its leaves and the lower nodes which will develop into mold or mildew. Moreover, the high levels of water in the air can prevent the soil from drying properly leading to root rot. Other than trimming, growers can also install a proficient ventilation system that will reduce humidity. It works best with the Sea of Green method. It takes advantage of its short structure and lateral branching while maximizing yields.

OG Skunk has an indoor flowering period of 7 to 9 weeks. Though short, the strain yields high with each square meter producing between 14 to 21 ounces of buds once ready for harvest.

Like other plants, OG Skunk likes the warmth and light that the sun brings. It has a huge turnout, with each plant producing at least 21 ounces of buds at harvest. Flowers usually bloom from the last week of September to the middle of October.

What is the OG Skunk strain yield?

OG Skunk yields 14 to 21 ounces per square meter indoors and 21 ounces or more per plant outdoors.

How much THC does OG Skunk have?

What are the origins of the OG Skunk strain?

Have you ever smoked or grown your own OG Skunk? Please let me know what you think about this marijuana strain in the comments below.