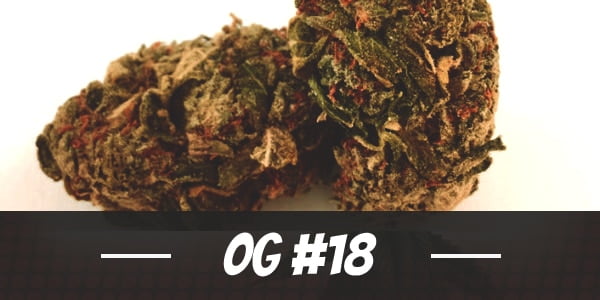 How does a strain live up to its legendary lineage? OG #18 is a phenotype of OG Kush, a strain that has been used to breed countless other popular and successful strains. Not to be left out, OG #18 went on to become not only a popular strain itself, but have also won several accolades, solidifying its position as one of the best cannabis strains ever. Being Sativa-dominant, the effects of this strain are mostly felt in the cerebral head high.

Around two decades ago, there was a highly popular strain that became the base of so many other hybrid strains today. One of its phenotypes has also made a name for itself. OG #18, a descendant of the legendary OG Kush, is also a multiple time winner of several cannabis cup awards.

OG #18 gives a head rush that can be described as one that focuses one’s attention to the euphoric sensation, and where care for anything else wanes. One user describes it best in that it allowed him to have much more fun in playing video games, but could not do pretty much anything else. Cleary, this strain is one of the best when you have the intention of feeling relaxed.

As its Indica side starts to kick in, a sense of total body relaxation creeps in. Feeling good with not a care in the world, another user describes the experience as time passing by without one being aware of it. As its effects begin to wane, consumers are most likely to feel hungry.

OG #18 is a great strain to use during the day or night in a casual setting with friends. For some people, one effect it has on them is being more energetic, while others have a heightened sense of focus, but as alluded to, the focus seems to be more on recreational activities.

What the OG #18 is also popular for is its impressive medical benefits, which is described in another section.

Slimer OG is a versatile strain that beginners and seasoned users can enjoy. Slimer OG is a potent strain with a quick-acting onset. Read our full review!

OG #18 has a strong odor from the onset that intensifies as it near its flowering stage. It has a strong and skunky smell with an undertone of fuel. Although its fragrance is not how one would describe as mind-blowing, it is not the kind to discourage one from picking this strain.

Despite the underwhelming odor in the sense that it is not one to attract you, it does have a great taste of Kush with a hint of fuel and pine, which might remind some of a Pinesol. For most users of OG #18, the taste is often one that is described as not bad.

About the only expected adverse reaction, one might experience with using OG #18, is dry mouth. Drinking water and keeping one’s self hydrated minimizes feeling dry, as well as taking care of other possible reactions including dry eyes and mild headache.

For novice users, feeling dizzy is not rare. But the head rush it brings might also surprise some leading to moments of panic due to unfamiliar sensations.

The use of OG #18, as well as any other strains of cannabis, is meant to have mental benefits as well as to alleviate or treat certain health conditions. As such, care should be taken as to not overusing. In other words, novice users should start with only a small amount, and in time, to know their limitations or tolerance level.

Used mostly by recreational users for relaxation, OG #18 is also a strain that offers potent medical benefits. It is very popular for people who have to deal with chronic pains. It is also a potent strain to use if one were dealing with mental health issues including stress and anxieties.

While a lot of strains do have a little benefit in dealing with medical concerns stated above, OG #18 happens to be one of the most potent strains for those purposes.

As its effects subside, users are bound to feel hungry, making this strain great if one were to seek something to help improve their appetite. Some gastrointestinal issues such as nausea benefits from using OG #18 too. Used at the end of the day, it also helps those with insomnia fall asleep.

One thing OG #18 does better than its predecessor is in yield size, having up to a third more. It can be grown outdoor and indoor, as well as in a greenhouse. While you could control the environment if you are using an indoor grow tent, you would be glad to know that this plant is resistant to mold and mildew.

Grown indoor, OG #18 is also suitable for hydroponics and the Screen of Green (ScrOG) method. It has a flowering time around 8 to 9 weeks and has a yield of approximately 16 to 18 ounces.

Outdoors, OG #18 thrives in a Mediterranean climate. It is also not the hardest plant to maintain so this plant should be manageable for growers with even only limited experience. The yield outdoor is expected to be around 20 ounces or more per plant during harvest by September to the early part of October.

Have you ever smoked or grown your own OG #18? Please let me know what you think about this marijuana strain in the comments below.