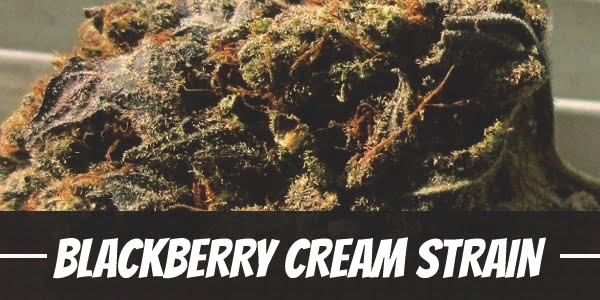 Blackberry Cream is, without a doubt, one of the most delicious strains out in the cannabis market today. It tastes like berry ice cream with subtle tangy notes that are softened by its creaminess. There is also a subtle hint of vanilla that reveals itself on the inhale.

Its effects are also notable too. It has potent levels of THC, measured between 20% to 25%, that deliver a quick-acting head high that inspires an innate sense of happiness within minutes. Simultaneously, it removes various aches and pains in the body.

In creating the strain, the breeders used Blackberry Kush as a base for its fruity berry flavors. The Indica leaning bud not only lent its terpene profile but also its soothing body buzz and heavy trichome production. Meanwhile, Cookies and Cream was added to lessen the harshness of its smoke. Its creaminess also prevents one from coughing. Its stimulating head high keeps the heavy-hitting effects of the former.

It delivers a rush of euphoria at the onset that immediately uplifts the mood. A behavioral change is immediately visible as users begin to feel lighter. It leaves users feeling happy as it clears away the mind of negativity and chaotic thoughts. The mental clarity is conducive to productivity. It heightens focus while creating headspace for thoughts to flow smoothly while finishing tasks.

After about an hour or two, a tingling sensation begins to intensify. It oozes from the temples down to the toes, kneading each muscle before eventually enveloping the body in deep relaxation. In spite of its intensity, it does not lock users on the couch with a debilitating physical buzz. Overall, Blackberry Cream can be used any time of the day. Using it in moderate amounts in the morning can pave the way for a productive day with its high concentration. Enthusiasts can increase the dosage at night by a few puffs to take away the stress of the day.

Blackberry Cream has a pungent scent reminiscent of freshly picked berries. Its hint of wet soil is perfectly complemented by its smooth and creamy vanilla. Meanwhile, combusting the buds reveals its sweet smoke.

Blackberry Cream is like a dream in the palate. It is deliciously sweet with hints of vanilla as one fully takes in its creamy smoke. On the exhale, it coats the mouth with its earthy aftertaste. Smooth on the lungs, it does not scratch the throat and leave users coughing.

An itchy throat, parched mouth, and irritated eyes are common reactions to smoking Blackberry Cream. Seasoned users relieve the dryness by downing a few glasses of water throughout the day. Avoiding caffeine and alcoholic drinks is also necessary to prevent it from worsening. Dizziness and paranoia are also possible but rare. Usually, it is the result of consuming too much but is also largely affected by one’s disposition before the high. Lowering dosage is essential to keep the experience pleasant.

Blackberry Cream has an uplifting buzz that instantly enhances the mood. In doing so, it reduces any accumulated stress throughout the day that can ruin one’s day or week with the overwhelming dread it incites. Its tranquilizing qualities also calm anxiety while managing symptoms of depression and other mental health issues like PTSD.

Its best use, however, is relaxing the body. It prevents the muscles from contracting in pain, hence why it is an impressive antispasmodic. Patients who suffer from multiple sclerosis, nausea, epilepsy, and seizures find comfort in its soothing properties as it relieves tension all over the body. In a similar manner, it also works effectively against fatigue. Its eases cramps either due to overworking the body or exercise before blanketing users in a restorative high.

Blackberry exhibits hybrid qualities when it comes to its growth profile. Its height and leaves, for instance, are indicative of its Sativa lineage. It is relatively tall with thin leaves that have a light green hue. Lining the outside, however, are its deep purple hues which are reminiscent of its Indica buds. Its frame is not at all lanky too. Instead, it has a sturdy stalk with thick branches that are easily bendable.

Its structure works best with both the Sea and Screen of Green methods. The former requires cultivating at least four seeds in a single square meter while the latter utilizes a screen above the canopy. Weaving the branches into the net creates more budding sites. Regardless, both increase turnout at harvest. Meanwhile, a high-stress method (HST) like supercropping or bending the branches until it pops but does not snap will double trichome production.

It is important to remember that Blackberry Cream is not available in feminized. Growers will have to apply pre-germination techniques such as overnight soaking to increase the likelihood of a plant developing into female. Utilizing low-stress training methods (LST) and being delicate while applying HSTs will prevent the plant from turning into a hermaphrodite.

Blackberry Cream has an indoor flowering period of 7 to 9 weeks. It yields at least 10 to 12 ounces of buds per square meter at harvest.

In the northern hemisphere, Blackberry Cream flowers from the last days of September to the second or third week of October. Growers can expect at least 12 ounces of buds per plant once it fully matures.

Have you ever smoked or grown your own Blackberry Cream? Please let me know what you think about this marijuana strain in the comments below.