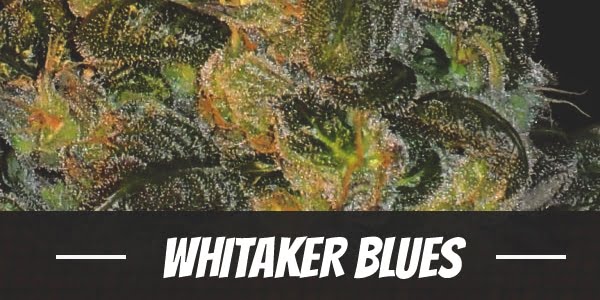 It is difficult to find fault in a strain like Blueberry. Its delicious smoke delivers a dreamy high that well-loved by various enthusiasts all over the world. A vigorous producer, it is a fan-favorite among cannabis connoisseurs with a penchant for cultivating their own strains.

Nothing short is expected of Blueberry though. It embodies the hard work of DJ Short, a man who experimented with various strains while bringing his music all over the world. Moreover, it is testament to the disc jockey’s dedication – having developed the strain to perfection for almost for 20 years.

Still, DJ Short’s son JD wanted to further improve his father’s creation by adding in a classic West Coast Indica named Quimby. In spite of its fame, the latter skillfully eluded the scrutiny of the mainstream cannabis industry. However, its effects are widely known for being hard-hitting and sedating.

By crossing the two, JD created the Indica dominant Whitaker Blues. Like its parents, it is potent with stable THC levels that average between 16% and 17% regardless of when a batch was produced. Moreover, it has immense therapeutic value thanks to the combined efforts of its chemical composition and provides a reprieve for users with either mental or physical health problems.

The cannabis industry is filled with potent strains with fast-acting, sometimes overwhelming, psychedelic high. In this respect, Whitaker Blues is quite unique. Rather than slamming the head with a rush of euphoria, its onset is barely noticeable. Still, users note an uplifting buzz that keeps users happy even after the last puff.

It is not uncommon to find users feeling hungry while using Whitaker Blues. Though subtle, the mental clarity is powerful enough to stimulate the appetite as well. For convenience’s sake, it is best to have snacks prepared ahead of time. In this way, the heavy-hitting body high will not incapacitate movement.

After an hour or two, a light pressure begins to trickle down from between the eyes. Like waves, it is soothing and calming. As it unties knots in the muscles, it envelops the body in deep relaxation. In all likelihood, users will find themselves locked to their couches until sleep takes over.

Whitaker Blues’ aroma is overridden with sweetness. Enhancing it are equally fruity pungent notes of apples and pears with a faint assortment of fresh berries that intensifies after the buds are crushed or combusted.

Drawn in, Whitaker Blues bursts with sweet overtones of apples and pears. A blend of grapes and berries, along with an undertone of floral herbs, leave a tangy aftertaste in the palate once the smoke is exhaled.

It is not uncommon for users to experience dry eyes and a cottonmouth while smoking Whitaker Blues. After all, dehydration is a common side effect of marijuana’s moisture-inhibiting cannabinoids. Thankfully, both are minor setbacks that do not taint the overall experience. Still, users can down a few drinks to ease the discomfort. Not alcohol though as it can exacerbate any problems.

When left unattended, chronic stress can lead to the early onset of heart problems like hypertension. It also increases the risk of people developing mental health issues like depression or exacerbate PTSD. As such, it is always important to take a break once in a while from the daily hassles of life. To this end, Whitaker Blue works perfectly.

Arguably, as an Indica-dominant strain, Whitaker Blues’ best use is as a physical analgesic. Its soothing body high reinvigorates the body and gets rid of fatigue. As tensions leave the muscles, users are whisked away to dreamland while enhancing the quality of sleep.

Whitaker Blues is not a tall plant. In fact, it normally stays below 5 feet. This makes it the perfect for smaller gardens and indoor growing areas. However, those with truly limited spaces can top the herb early or shorten the vegetative period.

Apart from its naturally short stature, Whitaker entices growers with its sturdy Indica structure. Both its thick stalks and branches do not break off easily when ravaged by strong gusts of wind. A great choice for outdoor growing, the plant can withstand high levels of moisture in the air and sudden changes in weather – so long as the changes are not extreme, of course.

In indoor environments, Whitaker Blue does not fail to impress. After all, growers do have full control over deciding factors like lighting, temperature, and humidity. Cutting away dead parts of the plant will also improve air and light circulation. Meanwhile, applying the Screen of Green method will encourage healthier budding sites in each branch.

Once it hits the flowering stage, Whitaker Blues produces buds that ooze with resin. When exposed to colder nighttime temperatures, its striking green colors turn into a stunning shade of purple.

At the moment, Whitaker Blues’ seeds are only available in regular form. To increase the chances of acquiring a calyx-filled herb, growers will have to apply pre-germination methods like soaking. Low-Stress Training will keep successful females from turning into hermaphrodites.

Whitaker Blues has an indoor flowering period 7 to 9 weeks with each square meter producing between 10 to 12 ounces of buds per square meter.

Garden grown Whitaker Blues blossoms around the last week of September to the second or third week of October. It yields at least 12 ounces worth of cured buds per plant.

Have you ever smoked or grown your own Whitaker Blues? Please let me know what you think about this marijuana strain in the comments below.