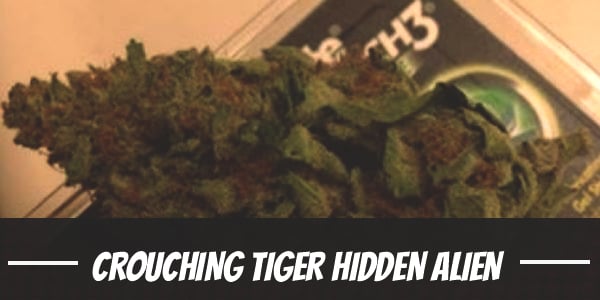 Crouching Tiger Hidden Alien is interesting in itself. Its name, for example, is an ode to the 2000 wuxia film that shook the Chinese and international movie industry. In a similar manner, the predominantly Indica strain is a game changer.

Exotic Genetix crossed two legendary Indica dominant strain to create their excellent medical hybrid. First is Tiger’s Milk, a bud that delivers a cerebral euphoria that dwindles down subtly into a relaxing buzz. The second herb is the uplifting Starfighter. By pairing the two, the breeders successfully intensified the soothing body high without losing the stimulating head rush.

The strain does both its parents proud. Crouching Tiger Hidden Alien calms the muscles and the mind without devastating its users. For this reason, it is great for use recreationally and therapeutically.

With THC levels of up to 25%, Crouching Tiger Hidden Alien is an impressively potent strain. When used excessively, it can stun users with a heavy-hitting high that can potentially lock users to their couches. In moderation, however, the experience is undeniably pleasant.

During the initial onset, it delivers a rather interesting, intense rush of euphoria that is uncommon among Indica-leaning strains. The mental stimulation is subtle at first but gradually intensifies. Normally, it takes a few minutes before the uplifting effects begin. This is not uncommon for many Indica-leaning herbs.

In time, a tingling sensation ebbs down from the temples. Soothing and calming, it releases tension and unties knots from the temples. Slowly, a heaviness sets in the limbs until it fully envelops the body in total relaxation. For this reason, Crouching Tiger Hidden Alien is best used late in the afternoon or early in the evening.

Tiger’s Milk plays a huge role in its offspring’s terpene profile. Like its predecessor, Crouching Tiger Hidden Alien has a spicy aroma with fragrant overtones of pine. Once crushed or combusted, an aromatic blend wet soil and herbal tea.

When first drawn in, Crouching Tiger Hidden Alien is floral with earthy undertones. A refreshing note of pine and tea dominates the palate once the smoke is savored which, on the exhale, leaves an aftertaste of pepper.

It is not uncommon for users to feel a little dehydrated while using Crouching Tiger Hidden Alien or any strain for that matter. It usually comes in the form of a cottonmouth and dry eyes but some experience dizziness as well. This is because cannabinoids interfere with the production of moisture in both the salivary glands and tear ducts. Both are mild and often go away on their own. If symptoms persist, users can down a few glasses of water to stay hydrated.

Exotic Genetix is among the top breeders of medical marijuana. As such, it is not surprising for Crouching Tiger Hidden Alien to be of immense value for the medical marijuana community. The combined efforts of its THC, CBD, and cannabinoids like terpenes provide a reprieve against a variety of mental and physical health conditions.

Among Crouching Tiger Hidden Alien’s best uses is as a stress reliever. It delivers a happy high that calms the mind of overwhelming dread. Similarly, it temporarily manages irritability, turbulent emotions, and other symptoms of depression or mental illnesses like PTSD.

In high levels, THC also turns into a natural muscle relaxant and appetite stimulant. It reinvigorates the body through its subtle rush of energy. In soothing the stomach, Crouching Tiger Hidden Alien prevents users from vomiting or experiencing nausea. As such, it is useful for cancer patients undergoing chemotherapy.

Crouching Tiger Hidden Alien has a typical Indica structure. It is relatively short, sturdy, and quite branchy. Not only that, the plant performs well outdoors. It can withstand various problems caused by moisture, wind, and pests. Though it grows best in warmer environments, it still thrives when cultivated in cooler climates.

Still, there are many who prefer cultivating their batch indoors where they can easily adjust factors like humidity, lighting, and temperature. Apart from that, controlled environments provide added protection against pestilence. Topping Crouching Tiger Hidden Alien will keep the plant short enough for growers with truly limited areas.

Trimming the dead parts of the plant will ensure an even distribution of nutrients. At the same time, it may even improve light and air circulation. Meanwhile, applying the Sea of Green encourage more budding sites to develop from its branches and produce vigorous yields.

Crouching Tiger Hidden Alien has a short flowering period of 7 to 9 weeks. Once mature, it yields 10 to 12 ounces of buds per square meter. Under the expert care of a seasoned grower, it blossoms even faster and yields higher especially when methods like the Sea of Green is applied.

In the northern hemisphere, Crouching Tiger Hidden Alien flowers from the last week of September to second to third weed of October. Each plant produces at least 12 ounces of cured buds.

Have you ever smoked or grown your own Crouching Tiger Hidden Alien? Please let me know what you think about this marijuana strain in the comments below.