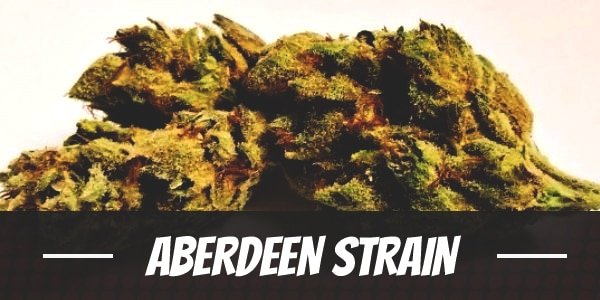 Aberdeen is Aphria’s rendition of the famed Agent Orange. Despite being named after one of the deadliest herbicides, the latter is actually a soothing and uplifting medical strain. Like its inspirational strain, the former has great mood enhancing qualities that make it a top choice among people with depressive moods.

Although intended for medical use, Aberdeen has moderate to average levels of THC to make it a tremendous recreational strain for casual users.

Aberdeen is not exactly the hybrid one wants to use if the idea is to use only a small amount and yet experience a soaring high. And while it brings people to heaven, the cerebral effects are not at all intense but still pronounced. In many ways, the Sativa side of this hybrid is a scaled down version of Jack the Ripper.

An energetic boost soon follows the clear-headed high. Apart from keeping users motivated to stay on the go, it also ushers in a euphoric feeling. In turn, this leads to improved sociability and friendliness. And, that is why it is an excellent choice for casual use among friends.

Aberdeen is not crippling in the sense that the psychedelic high becomes overbearing or disorienting. Far from being a hindrance, it may even help raise productivity levels. However, that may change when the Indica traits begin to manifest.

Beginning with slight pressure on the forehead, a warm buzz ebbs down the spine and spreads towards the extremities. Along with it is a calming sensation that soon leads to complete relaxation. Eventually, many of its users are likely to settle down, chill, and simply drift off to sleep.

Aberdeen may not have the extremely high amounts of THC that some other strains have, but it is most definitely not weak either. Use too much, and its effects can be overwhelming. The buzzing high, as a result, may also induce visual and auditory distortion.

Aberdeen is remarkably fragrant. It has the sweet aroma of ripe oranges balanced out by a refreshing mint. It also emits an overpowering pungent, cheesy scent.

Dominating the palate is Aberdeen’s citric flavor of oranges. When drawn in, a savory sweet cheese overpowers the initial fruity flavors of the strain. On the exhale, the taste of chemical becomes evident with a subtle menthol following right after.

Dehydration is common with marijuana use. It usually shows up in two areas, the eyes and the mouth. However, the lack of moisture is mild. Most users ignore such typical effects because they are barely noticeable.

Although Aphria markets Aberdeen as a medical strain, self-medication is not recommended especially when one has an illness. The company has not disclosed the CBD content of the hybrid, but suffice to say, together with other cannabinoids, it is enough to benefit patients.

Inspiring happiness from within, Aberdeen effectively wipes out any accumulated negativities of the day or the week. With its uplifting high, it enhances moods and positively affects one’s outlook on life. As such, it can be a great source of comfort for those dealing with depression, PTSD, and even anxiety.

Besides the behavioral changes, Aberdeen is also known to have physiological benefits. As a natural analgesic, it can be used to relieve headaches, cramps, and fatigue.

Aphria did not release the seed version of Aberdeen. In fact, they only market finished products or flowers.

The plant, itself, is most likely developed to produce an abundant yield indoors. Although typical plants thrive outdoors, companies like Aphria prefers to cultivate it in a facility where they have control of the environment.

Aberdeen has an indoor flowering period of 7 to 9 weeks. At harvest, it should be able to produce up to 16 ounces of buds per square meter.

If cultivated outdoors, the plant should be ready for harvest by October with each plant producing some 19 ounces of buds or more.

What is the Aberdeen strain yield?

How much THC does Aberdeen have?

What are the origins of the Aberdeen strain?

Aberdeen was created from a mix between Orange Velvet and Jack the Ripper.

Have you ever smoked or grown your own Aberdeen? Please let me know what you think about this marijuana strain in the comments below.