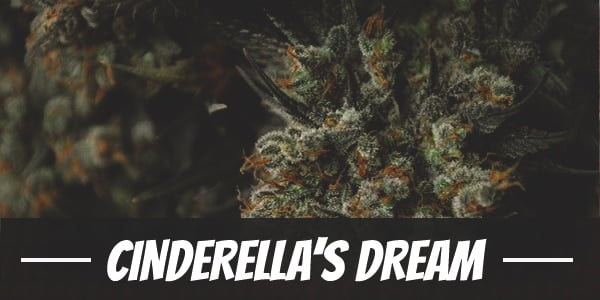 If Cinderella smoked weed, she would have probably been a fan of strong Sativas. Otherwise, how else could she have come up with memories of talking mice and pumpkin carriages? Whatever the case is for the fairy tale character, it is clear that the creator of Cinderella’s Dream may have strongly considered the possibility by naming a strain after her. Sadly, whoever bred the Sativa dominant strain remains unknown.

It’s a good thing, however, that the strain’s genetics are available for everyone to see. The breeder used two select varieties with one being Cinex, a plant that induces a clear mental high. Then, it was crossed with Blue Dream, a breed famous for its gentle euphoria and soothing body effects.

Cinderella’s Dream begins with a burst of energy. Easing away negativities, it quickly wakes people up from feeling lethargic. Powered by a reinvigorated mind, users feel motivated to finish tasks and work set about for the day.

Ushered in by the energizing onset is the mood enhancing qualities of the Sativa-dominant hybrid. The lively outlook inspires a sense of happiness from within. It makes one sociable and, not to mention, talk a lot. At the same time, the mental stimulation clears away any burdens that may hinder users from productivity.

Gradually, an uplifting sensation buzzes in the temples. It signifies the start of the strain’s Indica traits starting to take effect. AS the uplifting feeling flows through the body, it soothes muscles before finally enveloping one in utmost relaxation.

However, the strain must be consumed in moderation. At up to 22% THC, Cinderella’s Dream is extremely potent. Overindulging could potentially lock users to their couches. Not that it is a bad thing at all, though, as most of the users prefer it for ending a day in bliss.

This strain has a pungent berry aroma, particularly that of blueberry. It also has the reinvigorating zest of citrus. After crushing the bud, it releases a skunky fragrance like that of its parent strain Cinex.

Similar to how it smells, Cinderella’s Dream has a sweet berry flavor. Drawing in the smoke, the clear citric taste of lemons is evident. On the exhale, it is deliciously spicy.

Dry eyes and a cottonmouth, these are two of the most common adverse reactions to marijuana use. Thankfully, these are mild and barely noticeable. Most users often ignore it while in the middle of a pot session. If the problem becomes a bother, it is best to rehydrate.

Sativa dominant strains like Cinderella’s Dream often affect the mind’s ability to perceive. As such, the distorted images and heightened sensations can trigger anxiety and even cause some people to become paranoid. The good thing is that these rarely occur, and the worst that could really happen is some slight dizziness. Still, the best way to avoid such reactions is by moderating the consumption of the strain.

Cinderella’s Dream is the ideal strain for easing stress and depression. Its strong Sativa leaning effects make it a great mood enhancer. Inducing an uplifting high, it snaps away all the accumulated negativity as soon as it begins.

Besides altering negative perceptions, Cinderella’s Dream also has positive effects on the body. For one, the same psychoactive compounds that stimulate the mind, also stimulate the appetite. Moreover, the strain has pain-killing properties. As an analgesic, it appeases all kinds of pains and aches including cramps, fatigue, and muscle tension.

However, Cinderella’s Dream should not be treated as a solution to one’s health issues. Despite its many medical benefits, the fact remains that it is psychoactive. As such, a health professional’s opinion must be taken into account before using the hybrid for self-medication.

Cinderella’s Dream is truly a ‘dream’ for users and growers alike. It is quite sturdy and so long as it is not exposed to extreme weather conditions, the plant can withstand most changes in weather.

But, like other Sativa leaning plants, it grows tall (over 6 feet). As such, the plant should be topped early. It can be trained to promote a bushy growth but will require regular pruning and trimming of its leaves.

Apartment growers may need to invest in anti-odor filters. As alluded to earlier, Cinderella’s Dream is quite skunky and pungent. In numbers, it may quickly fill the house and become a tad bit overbearing.

At maturity, its buds slowly take on a popcorn-like shape covered in fiery orange hairs that perfectly contrast its lively forest green hue. Besides that, a rich frosting of mint green crystal trichomes gives it an enticing look.

Cinderella’s Dream has a flowering period of 7 to 10 weeks. At harvest, indoor growers can expect a yield of 10 to 12 ounces per square meter.

Cinderella’s Dream is expected to flower by mid-October. Tend to it with tender loving care, and she rewards her cultivators with some 12 ounces of beautiful buds per plant.

Have you ever smoked or grown your own Cinderella’s Dream? Please let me know what you think about this marijuana strain in the comments below.