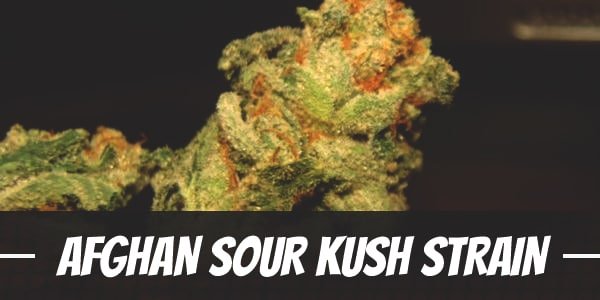 Afghan Sour Kush has a highly potent hybrid with some batches testing to have as much as 21% THC. While it is mostly Indica, it can still send users on a euphoric high. Much of its heritage is an influence of the landrace Afghani strain. Apart from its sedating qualities, it is also a plant that can withstand harsh growing conditions.

Using Afghani as the genetic base, the breeder MTG Seeds crossed it with Turbo Diesel, a cross between two distinguished lineages – Sour Kush and Sour Diesel. From this in-house hybrid, it passed on uplifting traits to Afghan Sour Kush.

MTG Seeds specializes in medical cannabis. In other words, while the Afghan Sour Kush has an appeal for casual users, its primary purpose is to provide comfort to people suffering from illnesses. This hybrid, together with many other award-winning strains developed by MTG has catapulted the company into the High Times Seed Bank Hall of Fame.

Developed mainly for medical use, Afghan Sour Kush is also an excellent recreational hybrid that first brings users to a cerebral high before a full-bodied relaxation. Its effects are profound but not one to have debilitating effects. Of course, that is not to say that it cannot wipe out people if overused.

At its onset, the hybrid brings on a euphoric head high that is energizing and uplifting. Besides promoting mental clarity, it also heightens the senses of users. Feeling upbeat and cheerful, most people tend to be sociable and talkative.

Gradually, as an uplifting sensation spreads all over the body, it might also make users feel aroused. As the physical effects intensify, it puts users in deep relaxation. Even when used in moderation, the natural tendency is to feel drowsy after an hour or two.

Afghan Sour Kush fills the room with a deep earthy aroma accompanied by sweet berry notes. It also has a pungent odor that is reminiscent of Pinesol.

Much of the aroma carries over to its flavors. Its smoke comes with subtle spicy and blueberry mix. During exhale, it leaves a sour candy aftertaste.

Like other cannabis, Afghan Sour Kush can cause dry eyes and mouth. Furthermore, it might also cause slight dizziness. For most people, these symptoms are mild and negligible. However, overindulging could also make it pronounced.

One of the most common reasons to use medical cannabis is as a means to de-stress. To this end, the Afghan Sour Kush has proven to be quite adept. As a side benefit, it is also a mild anti-depressant. Combining that with the uplifting psychedelic high, it can also help people overcome depression.

Another significant benefit of Afghan Sour Kush is its ability to relieve pains including eye pressure and headaches. Once the sedating properties of the Indica side take over the body, it can numb muscles aches.

During the cerebral head high, the energizing effects can help people fight off fatigue. Its best use though is to help users chill and settle down after a tiring day. And, because it promotes sleepiness, even insomniacs should find it capable of aiding in quality sleep.

Growing Afghan Sour Kush indoors or outdoors is not that difficult. One thing to consider before planting it is the pungent odor it emits. If that is not a concern at all especially in an open area, then it is best cultivated in a warm climate.

On the other hand, most growers do cultivate indoors. Apart from privacy issues, it is also because using an enclosure allows for the installation of an odor-control filter. Using soil allows the plant to have optimal flavors, but for a faster growth rate, hydroponics is the best way to go.

Although the plant is mostly Indica, its flowering range is a little longer than typical. Once mature, it tends to have small round light minty green nugs covered with thin layer of twisty dark purple hairs along with dark forest green undertone.

The bloom phase begins soon after switching to a 12/12 light cycle. It will take 9 to 10 weeks of flowering before it is ready for harvest. On average, each square meter can produce 10 to 12 ounces of buds.

In its natural environment, Afghan Sour Kush can produce at least 12 ounces of flowers per plant by October.

What is the Afghan Sour Kush strain yield?

How much THC does Afghan Sour Kush have?

What are the origins of the Afghan Sour Kush strain?

Have you ever smoked or grown your own Afghan Sour Kush? Please let me know what you think about this marijuana strain in the comments below.