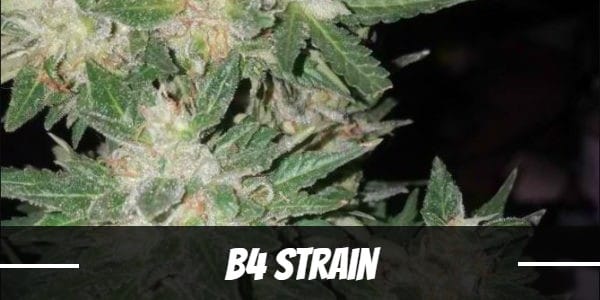 MTG Seeds has made quite a name for itself. With over 20 years of experience in the medical marijuana industry, they have made themselves known as the breeder of choice when it comes to high-yielding strains with multiple therapeutic benefits – one of which is B-4.

On its structure, B4 is close to being an even split. However, it does tend to lean towards the Sativa side. Much of it is due to the influence of Blue Dream – a hybrid known to deliver a subtle yet stimulating mental high followed by body relaxation. Apart from effects, it also passed on the berry flavors that have endeared it to recreational users.

In adding the genetics of Chemdawg 4 to Blue Dream, the offspring gained new traits or improvements. For instance, the ability to act quickly in inducing psychedelic high as well as a distinct subtle skunky taste.

For recreational use, it should appeal to all types of users. At 15% to 26% THC, though, one has to be wary of the dose. Used in moderation, it also comes with significant therapeutic benefits.

The effects of b4 are mostly cerebral, especially during the onset. It does not take long after using it to feel the mind soaring to euphoric heights. As a flood of energizing sensation floods in, it stimulates the creative side of users as well as induce mental clarity. During this time, most people tend to feel cheerful and active. And, with heightened sensitivities, focusing on tasks becomes easy.

Looking to buy seeds like B4? Check out our marijuana seed bank.

At the height of the head high, most users should feel a light pressure on the forehead. Apart from the ability to think of new ideas, it is also possible that some might start to have deep thoughts.

In time, as is the case with all hybrids, the Indica properties of B4 follows the mental stimulation. It starts with an ebbing wave of soothing sensation that spreads to the body. As tension leave the body and muscles relax, most people tend to slow down on physical activities. Even as the full effects take over the body, it does not deliver an intense numbing or sedating buzz that can be debilitating.

For the most part, B4 leaves users chilling and if in the company of friends, simply share a good conversation.

At the first whiff, the blueberry scent that comes with a subtle spicy note is reminiscent of Blue Dream. Although it is not immediately apparent, Chemdawg 4 is not to be left out. After crushing the bud, it reveals a subtle smell of skunk.

B4 boasts of a smooth smoke that is smooth and packed with a mix of blueberry and skunky flavors. It also leaves a spicy aftertaste during the exhale.

B4 can cause dry mouth and eyes. How pronounced these symptoms depend on individual susceptibility and dosage. Other conditions that might arise include feeling dizzy or having a headache.

Based on its genetics, B4 has the potential to increase anxiety levels or cause some people to feel paranoid. Mostly, this is attributed to the Sativa genes and could occur if too much of this hybrid is used.

B4 offers a myriad of therapeutic benefits. Its happiness inducing high allows those with PTSD and depression to look at the brighter side of life. Because it clears the mind of a multitude of thoughts, users, regardless of whether they have ADD or ADHD, are far more likely to focus and stick to tasks. Similarly, it may be used to relieve stress and anxiety.

We don’t currently sell B4 seeds. Check out other sativa dominant seeds in our marijuana seed bank.

Aside from inducing behavioral changes, B4 also has potent analgesic properties. Its combination of cannabinoids can alleviate physical discomforts including cramps and chronic body aches.

MTG Seeds develop hybrids that not only grow outdoors but also thrive in greenhouses or indoors. A compact plant, B4 produces bluish-green flowers coated with a generous amount of trichomes.

Unfortunately, it is not available in seed form. It is also unlikely that home growers could get ahold of a cut.

In developing B4, one of the critical traits that it possesses must be a quicker flowering period. As such, it may lean towards the Sativa side, but the bloom phase should last only 8 to 9 weeks. On production, each square meter should have a yield of 10 to 12 ounces.

It is not likely that MTG Seeds will grow this plant outdoors. That does not mean it will not survive. Far from it, it should not deviate from typical hybrids that reach maturity during October with each plant producing some 12 ounces of buds.

FAQ About B4 Strain

What is the B4 strain yield?

How much THC does B4 have?

What are the origins of the B4 strain?

B4 was created from a mix between Chemdawg 4 and Blue Dream.

Have you ever smoked or grown your own B4? Please let me know what you think about this marijuana strain in the comments below.