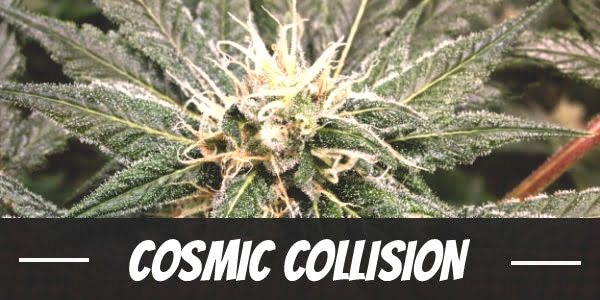 Sometimes, combining the best of two elements can bring out the best of each. Take, for instance, Cosmic Collision. A medical marijuana hybrid developed by MTG Seeds, it takes the best qualities of its genetic bases in which one could say that the offspring is better than its each of its predecessors.

At first glance, the name of Cosmic Collision is reminiscent of roller coaster rides in theme parks. And, for the science geeks, it could also invoke images captured by NASA. In some ways, that is what the hybrid could do. It takes users on a thrilling journey before settling into a spacey trip across galaxies.

Cosmic Collision is a mostly Sativa hybrid, and a potent one at that. Right after the first couple of tokes, it ushers in a revitalizing and euphoric head high. In an instant, the hybrid clears the mind and inspire creative thoughts. Gradually, as the mental buzz intensifies, users tend to become sensitive to surroundings.

Apart from making people feel energetic and cheerful, the mood-swing also turns one sociable. In fact, when in the company of other people, staying silent is almost an impossible task. Depending on usage or tolerance level, it is likely that thoughts turn philosophical as the effects reach its peak. Instead of remaining talkative, users now fall into deep introspection.

At some point after reaching the peak of its cerebral high, the Indica traits of Cosmic Collision also works its way to the body. It provides a soothing sensation that helps release tension. While pronounced, it does not in anyway cause one to slow down or feel lethargic. After an intense psychedelic journey, though, most users end up tired and likely to fall asleep.

Cosmic Collision exudes a combination of sweet and fruity tropical kiwi smell. It also has a subtle earthy mint scent.

The fruity fragrance of the hybrid carries over to its smoke as it blends with a skunky and earthy taste. During the exhale, it leaves a minty aftertaste.

Apart from the many benefits of Cosmic Collision for both recreational and medical users, it also has a few adverse effects. Dry mouth and eyes, along with dizziness, are typical. These conditions are often mild and often ignored.

Being a potent Sativa, one thing that people should watch out for is its potential to cause anxiousness or paranoia. Such effects are the result of using too much.

Cosmic Collision is not only an energizing hybrid but one that can quickly enhance the mood. As such, it can quickly melt away stress as well as help people recover from depression. Its ability to provide energy is also beneficial in fighting off fatigue.

Possessing a high amount of THC, it can help people find a reprieve from chronic pains as well. Together with the anti-inflammatory properties of its Indica side, it helps soothe muscles even as it induces body relaxation.

One other thing that Cosmic Collision is useful at is the anti-psychotic properties of its CBD compound. It helps to stabilize the conditions of people who are suffering from bipolar disorder.

Finally, as mentioned, most people who use this hybrid likely fall asleep as the effects wane. Hence, people with trouble sleeping may find it a useful aid.

The buds of Cosmic Collision have a conical shape that is similar to a Christmas tree. It has a mostly minty green color with golden hues. Surrounding the flowers are amber-colored hairs and a generous coating of frosty crystals.

Released as a limited-edition variety, the flowers itself may no longer be available, let alone its seeds. That is not to say it is impossible to find. At any rate, it is best to exercise due diligence before purchasing online.

Growers will want to top it early on to keep the height down when planting inside an enclosure or tent. It should adapt well to the SCROG setup. As the plant stretches, regularly trimming the leaves helps allow for better light penetration and air circulation. Its flowering period takes some 9 to 11 weeks with each square meter having a yield of up to 16 ounces.

Cosmic Collision should thrive in a climate the is similar to the Mediterranean where there is plenty of sunshine. It transitions to the flowering stage by October and once mature could produce at least 16 ounces of buds or more per plant.

Have you ever smoked or grown your own Cosmic Collision? Please let me know what you think about this marijuana strain in the comments below.